‘And the Oscar goes to…’ Write an Article about a Film you think deserves an Award And the Oscar goes to…the tremendously, wonderful flying nanny; Mary Poppins. The ‘practically perfect’ nanny magically turns every chore into a game and every day into a whimsical adventure. Along the way, you’ll be enchanted by unforgettable characters such as the multi-talented chimney sweep, Bert. You won’t need ‘A Spoonful of Sugar’ to love every moment of this timeless Disney classic, undeniably deserving an Oscar for its excellent craftsmanship! Walt Disney was one of the greatest story tellers that ever lived, but even saying that is an understatement.

But when you look at his body of work from; the animated short subjects to the animated features to some of the live action films, you know that statement is true. But Walt’s dream project, one that he had been interested in since the 1930’s, was Mary Poppins. Mary Poppins was a book that Walt read to his two daughters.

It was his oldest daughter, Dianne, which thought it would make a good picture. In response Walt made many attempts to secure the right to the books, but PL Travers, thinking that Walt wouldn’t do justice to her creations, refused to do so.

It wasn’t until 1959 after a face to face meeting with the author; P. L. Travers finally succumbed to the entreaties of Walt Disney. The movie combines a diverting story, songs, colour and sequences of live action blended with the movements of animated figures.

And the result, is often considered, the finest of Disney’s personally supervised films. Above all, Mary Poppins teaches us to find the magic in every day; in her hands umbrellas fly, carpet bags hide endless treasures and a day at the park becomes a journey to a new world.

There are many reasons to why the movie has been such a great success; from the actors to the sounds and animation. Many of the visual effects include a combination of live action and animation accomplished by using sodium process created by yellowscreen that it sets the bar high for future Disney films such as ‘The Parent Trap’ and ‘Bedknobs and Broomsticks’. But what really made Mary Poppins work, was the outstanding songs and music by the Sherman brothers, with a total of 18 throughout the entire film. A lot of the songs are upbeat while still having a couple of them be slow and moving.

Oddly enough, each song has its rightful place in the movie, if even one of the songs were to be removed from the film; it would disrupt the movies whole sequence of events. But one song in particular, ‘Feed the Birds’, was considered a personal favourite of Walt’s, as it clearly showed the importance of how small aids of kindness can brighten someone’s day. The movie has been proven to be a timeless classic, fit for adults and children alike, as the film still contains some messages that can be quite interesting and useful for any other person of any other age.

Beyond its wild special effects and unforgettable characters, the message behind ‘Mary Poppins’ remains an important one for young people to understand, especially today: hope and optimism can be powerful tools in the face of hard times. Children may not understand this at first, but the film does stimulate the imagination and the creativity of a child. Seeing it again recently, I have been able to understand the double sense of things and found out that this film has so many subliminal great messages that are enriching for the mind and soul. The timeless classic became the highest grossing film Disney had ever made.

It is clearly one of the best films ever made and a crowning achievement for Walt Disney who died two years after the film’s release. Mary Poppins has been, and still is, a very inspiring film for both kids and adults with its great characters, loveable songs and happy positive nature. Over time the film may seem better to you or less engaging, but one thing is for certain: Mary Poppins had influenced lives with its charming aura that only Disney can express. Maybe it was the ‘Spoon full of Sugar’ or her magical flying umbrella, but either way there is only one word to describe this movie; Supercalifragilisticexpialidocious! 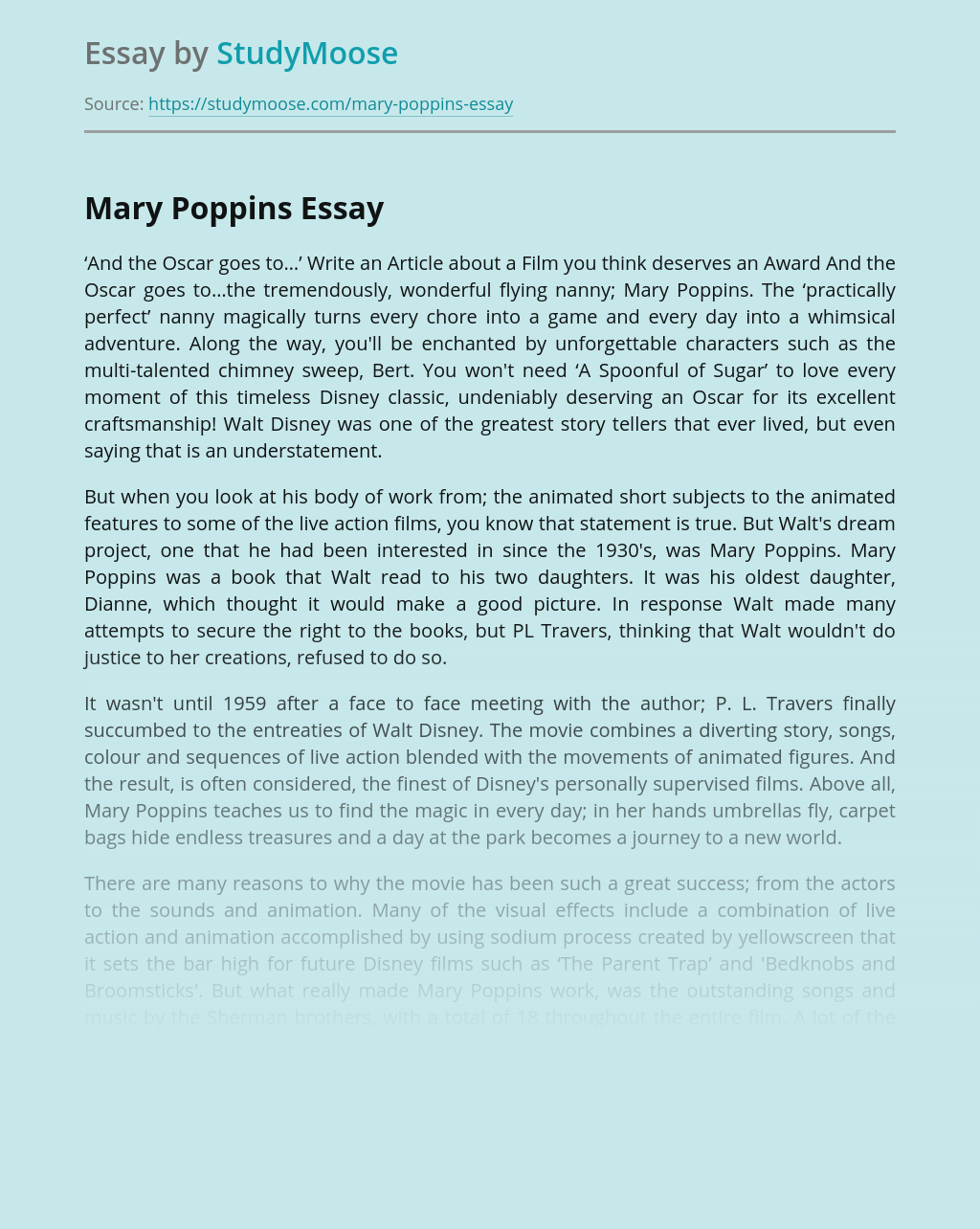