While analyzing Mary Oliver’s poem “Singapore” I established her assembling a relationship between nature and a life- learned lesson. The poem is about a woman doing menial, everyday tasks as a cleaning lady at the Singapore airport, but Oliver chooses to idealize her toils and make them seem more beautiful than in, Oliver uses imagery to compare the way she perceives the woman before her versus the real world. The author was disgusted with what she saw, so she brings in visions from nature to ease the discomfort.

The configuration of this poem is structured to differentiate from the reality and the fantasy of everyday life. In Oliver’s poem “Singapore” she speaks of how the woman cleaning the ashtrays in the airport and the toilets can be blissful and nurturing. For example, Oliver writes a “poem should always have birds in it” (8).

Oliver uses her writing to convey the way she hopes life would be; she wishes it was beautiful and as blissful as birds are.

Then she states other aspects of nature as a form of peacefulness and happiness. For instance, Oliver states “rivers are pleasant” (10). Oliver uses the river as a form of serenity because of the flow of the water and the sound of water that soothes us. Furthermore, Oliver demonstrates that poems should always be a gate to happiness by stating, “A person wants to stand in a happy place” (13). Oliver wants to be in a happy place instead of seeing this woman in front of her in this humiliating situation.

In Oliver’s idealistic reality, life is pleasing and should not deal with the ugly, mundane situations in life. Although the woman is seen as a simple worker in reality, Oliver embellishes the happenings with things of beauty from nature like fountains, waterfalls, birds and trees.

Then in Oliver’s poem, she goes back and forth between realities through her thoughts, where she is pursuing to envision contentment. For example, Oliver states, “first we must watch her as she stares down at her labor” (20). She then compares it to nature, “She does not work slowly, nor quickly, but like a river” (25). Oliver is trying to envision her experience as positive and self-soothing. She is imagining the woman as if she were out in the wild watching an animal trying to live just as the woman is trying to earn a living by working. At the end of the poem, Oliver says “the light that can shine out of a life” (39) meaning that she sees this lady as if she were a beacon of light in a dismal existence. Although Oliver was at first disgusted with the sight of the woman in her working environment, she portrays it as much a part of life as the trees and the birds.

In Mary Oliver’s poem, “Singapore”, the poet uses images of nature to make the tasks of everyday life seem more pleasing to the eye and to the reader. She conjures up images of nature to relieve the stress and burdens of daily life. She makes the most meaningless or redundant task seem elegant by comparing it to the birds, the trees, and the rivers. If to choose between reality and unreality, would anyone not choose to “rise up from the crust and the slop and fly down to the river?” (32-33). 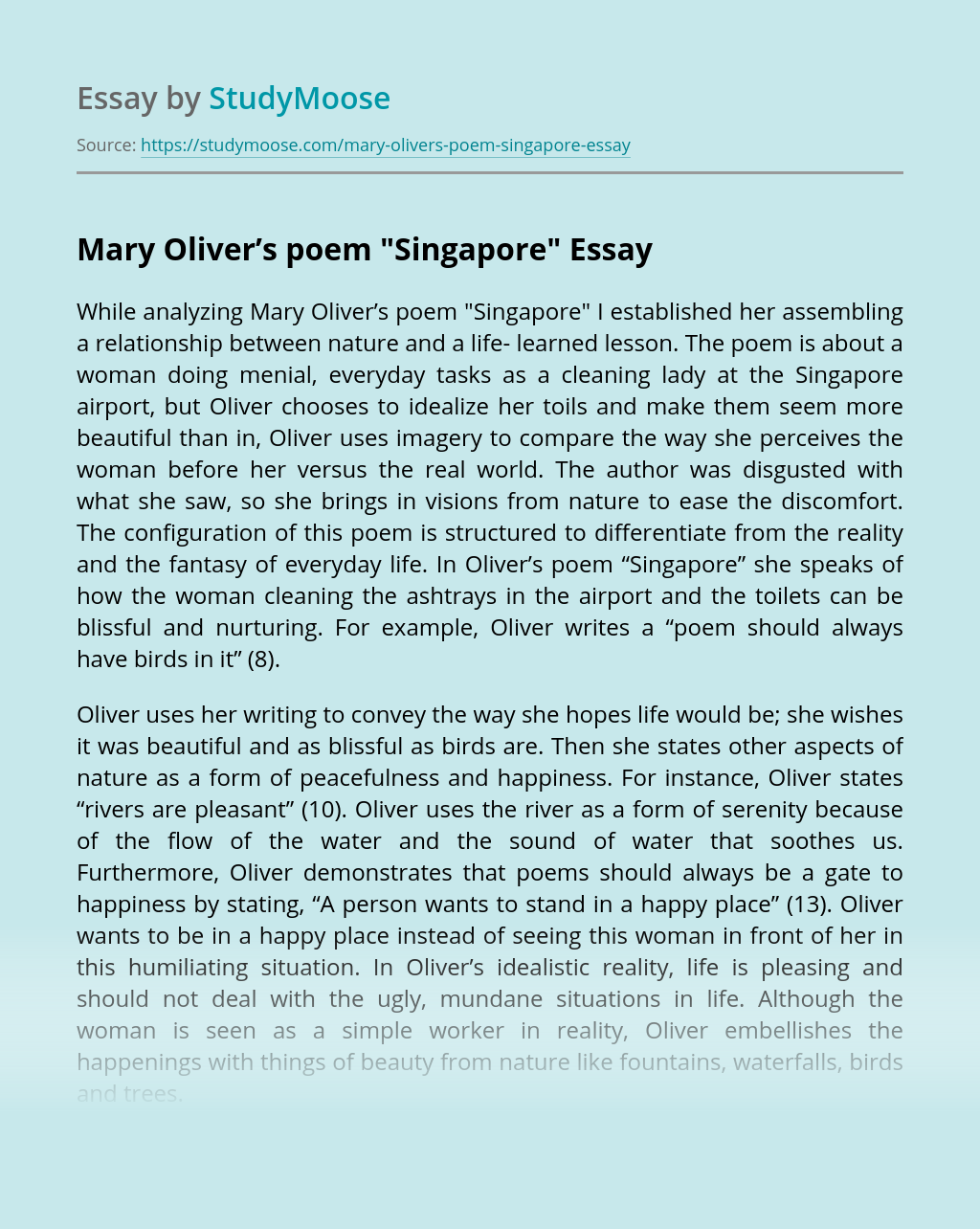