Marriage in the 16th Century

Marriages in the 16th century were not for love but were business arrangement the only requirement for marriage was the mutual consent of a man and woman not already married to someone else. A likely match would be suggested many years before a wedding by a broker or an influential family member. В Negotiations between two families were sometimes sealed until the bride reached puberty and a suitable dowry could be amassed.

Dowries, which consisted of goods such as clothing and jewelry as well as money or property, were among the greatest financial obligations that families with female children faced.

Don't use plagiarized sources. Get your custom essay on
“ Marriage in the 16th Century ”
Get custom paper
NEW! smart matching with writer

Grooms, too, were expected to provide gifts; among the wealthy, these often-included gems and luxurious clothes for the bride to wear during the wedding festivities. Once married the wife was property of the groom.

Courtly love was a medieval European literary impression of love that emphasized nobility and chivalry. Medieval literature is filled with examples of knights setting out on adventures and performing various acts or services for ladies because of their “courtly love”.

This kind of love is originally a literary fiction created for the entertainment of the nobility, but as time passed, these ideas about love changed and attracted a larger audience. In the high Middle Ages, a “game of love” developed around these ideas as a set of social practices. “Loving nobly” was an enriching and improving practice. Courtly love includes praise of the beloved woman, who is superior and can be approached only with restraint and respect.

For all these elaborate efforts, the lady need only return a small hint of approval. an example from Romeo and Juliet is: Then, when Romeo approaches Juliet at the banquet being held for Juliet his love is expressed poetically and he praises Juliet in the courtly love tradition: If I profane with my unworthiest hand. This holy shrine, the gentle time is this, My lips, two blushing pilgrims, ready stand… (1.5.93-95) Roles of men and women. In Romeo and Juliet, women have minor roles in the society. They are expected to be obedient and followers of men in their families. For example, Lady Capulet and Lady Montague can do nothing to stop their husbands’ anger to their opposition.

Lady Montague doesn’t care much about the fight between two families as she doesn’t want Romeo involved in the fighting. Juliet’s characteristic is a clear example of women’s role. She has little guidance and help from her family. She is expected to marry Paris as her father decided. Husbands had expectations of their wife as much as parents had of their daughter; women were expected to behave accordingly, obeying their husbands. Their role as a wife would be to comply with their husband’s decisions.

Marriage in the 16th Century. (2020, May 11). Retrieved from https://studymoose.com/marriage-in-the-16th-century-essay 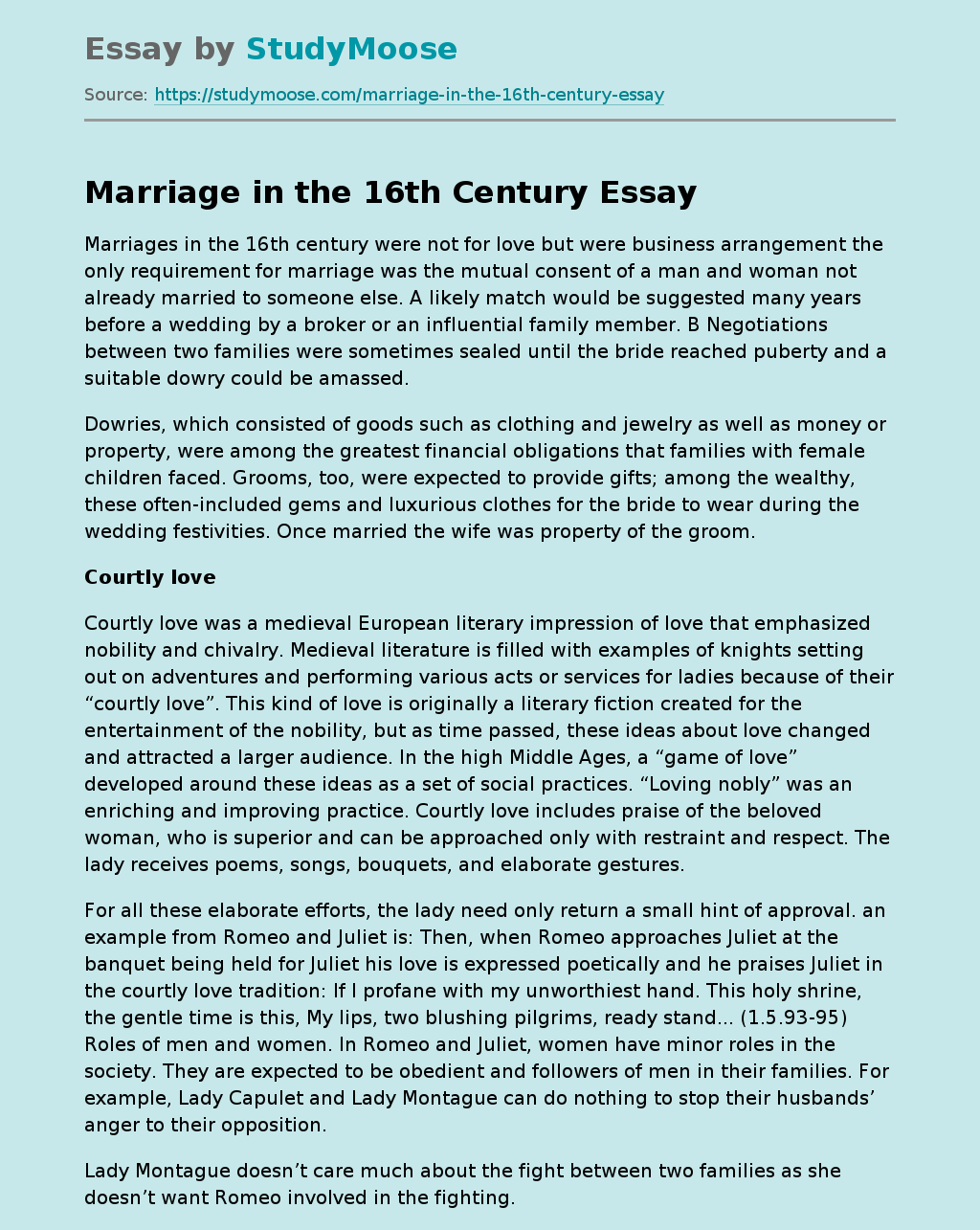