FOM Study Programme Master of Business Administration (MBA) Module: Marketing Assignment: 1/2 Author: Christian Gondek 1st Academic Semester 2010/2011 Essen, 21. 01. 2011 Executive Summary – Part I The Ford Motor Company (FMC) is one of the biggest and most successful automotive manufacturers in the world based on a long tradition of automotive development. Since 1931, the plant in Cologne has produced more than forty million vehicles.

The focus of this assignment is to analyse the latest version of the product Ford Fiesta (FF) for the German market which has been introduced in 2008.

Don't use plagiarized sources. Get your custom essay on
“ Marketing on Ford Fiesta ”
Get custom paper
NEW! smart matching with writer

First of all, the product will be introduced followed by a market analysis including demographic, geographic and behavioural segmentation in order to determine the prototype of the customer Ford of Germany (FOG) targets. It has been assumed that the customer is female, 28 years old or close to that age, living in or next to big or capital cities and is mainly focussed on design and life-style aspects.

The analysis of marketing objectives and strategy starts with Porter’s model of Five Forces shown in the appendix.

In order to analyse the environment, the SWOT analysis has been chosen. As part of the SWOT’s analysis of the external environment, a PEST framework has been applied. Finally, the competition of FOG and the product itself will be demonstrated. In order to present a clear positioning within FOG for the FF, data of the Kraftfahrzeugbundesamt (KBA) have been used to create a BCG portfolio analysis of FOG’s products with the highest market share.

FOG has achieved to launch the new FF at the optimal point of time and gained a momentum which has resulted in high market share in the market of smaller cars and was based on the right type of target group and a precise positioning of its product.

Ford Motor Company’s (FMC) product range consists of several models placed in different price levels. The FF represents a model of the so called small car line which is positioned in a lower price range. From a company’s perspective, the amount of revenue of vehicles sold determines also the revenue generated by additional services within the customer life cycle. 1 The market of the small cars is a very aggressive market since profits are low and success depends on a high number of sales and a mature market2 with low growth rates in the past.

This has resulted in a shorter product life cycle of the product, whereas companies have reacted by a variety of modifications to meet customers’ requirements and satisfaction. 3 Moreover, loyalty of existing customers has become an essential aspect. Within last years, the economic recession and the introduction of scrappage premium programs, predominantly within Europe, have led to a shift to smaller cars and an extended customer profile. In addition to that, one of the most striking aspects of the automotive market is a higher focus on environmental aspects influenced by the idea of sustainable development.

In the following analysis, the tangible product FF will be analysed by demonstrating the important aspects of the product in Chapter 2, its market in Chapter 3, its marketing objectives and strategy including its positioning within Ford in Chapter 4 and its unique selling proposition (USP) in Chapter 5. Finally, the conclusion in Chapter 6 summarizes all analysed aspects and draws the conclusion. [pic] [pic] Executive Summary – Part II This assignment is based on the first assignment and continuous to analyse Ford of Germany’s (FOG) marketing strategy for the Ford Fiesta (FF) based on the marketing mix.

On the one hand the outcome of the first analysis has identified a strong unique selling proposition (USP) for the product itself, on the other hand it has identified further requirement to remain competitive in the mature market of small cars. The marketing mix exemplified by the four P? s starts with an analysis of the product and shows that the offers and product variants have been chosen according to the positioning of the product. Branding, unfortunately, is a lack of the product which might have high impact on the product awareness and the future loyalty of customers.

As the price is the criteria which influences as well turnover as profit margins, it is one important criteria of the marketing mix. During the analysis, FOG’s positioning will be analysed and reasons for a close distance to competitors’ prices will be assumed. Within the automotive market, the place of distribution will be analysed, which demonstrates potential disadvantages to competitors due to the retailing structure FOG uses in the complex market situation. Finally, communication has been analysed which has been a great advantage to the product launch.

However, as the model of four P? s proofs advantages (price, promotion) as well as disadvantages (product in terms of branding and place) and according to the author’s point of view the model of four P? s is not sufficient to analyse the FF’s future positioning, a new model has been applied which takes Customer Satisfaction and Loyalty into account based on the automotive loyalty pie in order to reinforce the customers repurchase intention. Those approaches will need to be considered by FOG in the near future to remain their position which is the outcome of their successful marketing mix.

This assignment is based on publicly accessible data only. Table of Content – Part II Executive Summary … ii Table of Content … iii List of Abbreviations… iv List of Figures … iv 1. Introduction … 1 2. The four P? s: Product … 2 3. The four P? s: Price … 4 4. The four P? s: Place … 5 5. The four P? s: Promotion … 7 6. Beyond the four P? s: The Loyalty Pie … 8 6. 1 Customer Loyalty … 8 6. 2 The Automotive Loyalty Pie … 9 6. 3 Ford’s impact on Loyalty: The automotive marketing & loyalty mix … 9 7. Conclusion … 11 Bibliography … 2 ITM Checklist: 360-degree analysis … 13 1. Introduction – Part II This assignment is based on the first assignment which has concluded in the identification of a unique selling proposition (USP) and also identified a challenge that the USP might not be sufficient to remain the competitive advantage1 in the near future with the Ford Fiesta (FF). In the following chapters, the marketing mix, which marketing experts use to position their products, is used to analyse the reasons for the successful launch of the FF and its success in Germany.

As the FF is a product and not a service, the model of four P? s is applied and the model of seven P? s is neglected. However, the marketing mix will show disadvantages and difficulties for the positioning of the FF as well as advantages. Its outcome, which has already been analysed in assignment one, is a successful positioning of the product (Chapters 2 – 5). This leads to the question if the marketing mix and the demonstration of the four P? s are adequate to predict an outlook for the product in the next years and to bond loyal customers. In order to fulfil the requirement of considering loyalty, a new approach has been applied which also considers customer, product and service loyalty (Chapter 6). Due to the constraints of the size of an assignment, this approach can only be started and would need further development until it can be used as an adequate tool for marketing experts whilst creating the marketing strategy. [… ] [pic] 1 Cf. Kotler, et al. (2011), p. 433. 2 Cf. Mankiv, N. G. /Taylor, M. P. (2008), p. 76. 3 Cf. Kotler, P. et al. (2011), p. 305. 1 Cf. Rugman, A. /Collinson, S. (2006), p. 50. 2 Cf. Edelman, D. C. (2010), p. 62-69. 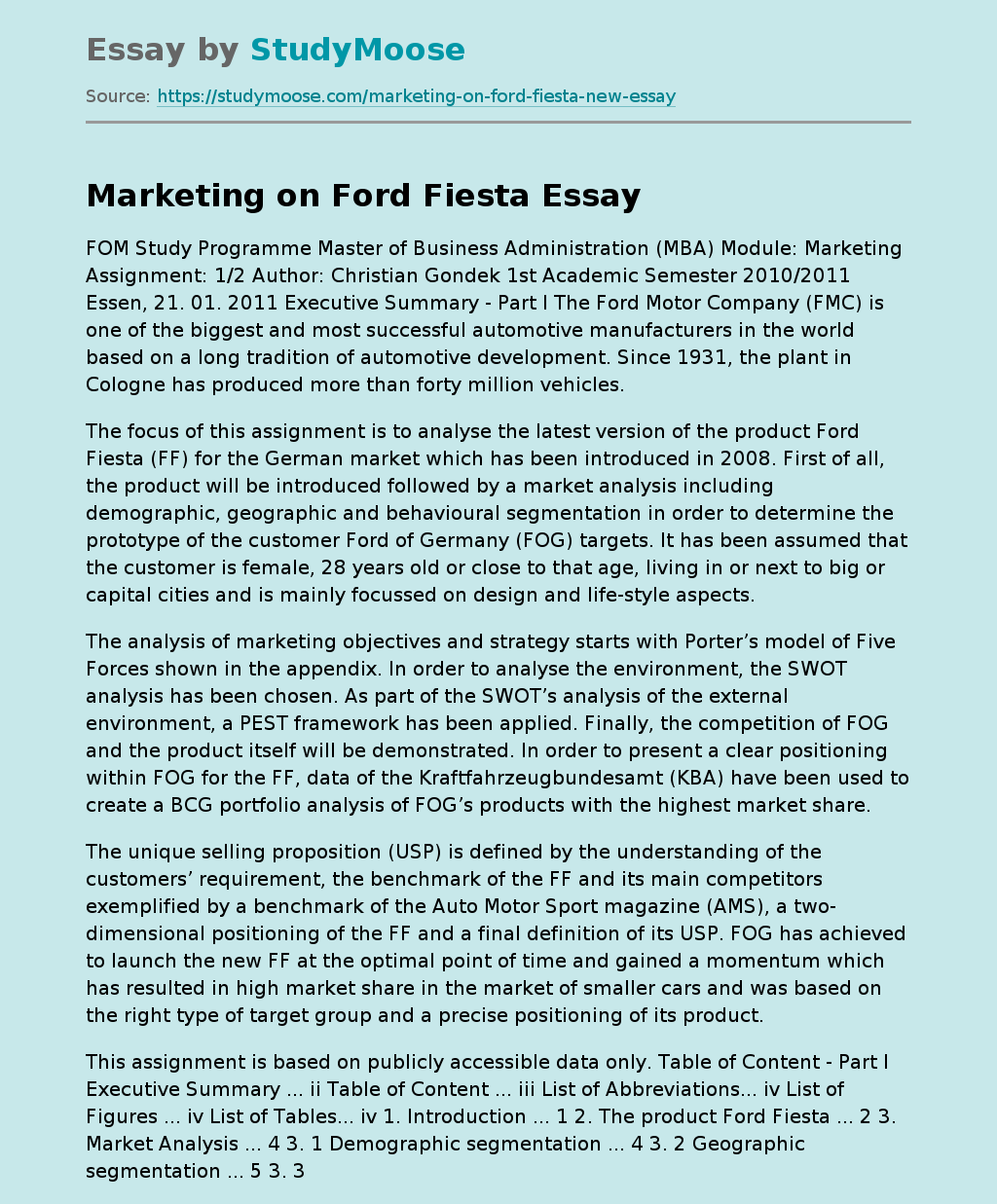