Mark Twain’s “Two Views of the River” offers two distinct ways of how to see the world. One is to see the world with a child’s eye. There is a certain level of amazement and wonder in seeing something for the first time or seeing something different in something very familiar. There is an exploration and a discovery involved. There is poetry. Then there is the other way of looking at things and seeing only the mundane. Here, people are seeing things and accepting that there is nothing extraordinary with things.

Don't use plagiarized sources. Get your custom essay on
“ Mark Twain’s “Two Views of the River” ”
Get custom paper
NEW! smart matching with writer

This happens quite often when people see a place or a thing and only see the practical side. There is less wonderment and more analysis as to why it is there, what is its usage and how does it affect people. From a colorful poetic view, it becomes a practical nonchalant way of seeing the world. To capture such feeling in film, one must first focus on the first way of looking at the world.

This involves seeing things for the first time with awe and wonder. It is poetic in a sense that almost every small detail has a hidden meaning and offers something worthy of camera time.

Therefore, it should start with a long shot of the whole scene. And then it follows the narration and zooms in into the details. This offers the effect that from the outside one notices the big picture but is affected more by the details. This puts emphasis on the significance of everything from the changing river to the ripples of the water to the shore.

Close-up shots of the river, the river’s changing colors, the sun, the ripples, the shoreline and the woodland should be taken. Each part should be consistently given importance and time. This creates the effect of taking it all in.

Each part contributes something beautiful to the whole scene and must be portrayed as such. The second scene would be about how a scene fades from being novel into something being practical. The key in giving off this kind of feeling is to look at how the small details fit into the big picture. Here, Mark Twain says how the sun tells of what the weather will be or how a floating log means that the water level is increasing. Everything is connected to each other and its importance is seen in how it contributes to the big picture. As such, it is good to go and reverse what was done on the first part.

From the close-ups, the camera can pan out of the woodland and the riverside through the river and end up with a zoomed out picture of the whole scene. It could also be shot in black and white while the other scene is shot in color. This does not mean the second more practical side in seeing things is less important. It does give off a dulling effect from something poetic to something practical. However, it also gives a larger view of the scene and as such, the viewer is able to see more and can use more what he sees for his everyday life. He sees the importance of things instead of its aesthetics.

The effect of both scenes is like how a child and an adult experience the city. The first time, as a child, one sees the city with its big buildings and assortment of. One notices first the different buildings and shops and lights. Each reminds that this is no longer home. There is something foreign in the air. The sounds of the city are loud as it is a mixture of people talking and cars going by. Then there are heaps of people, each dressing differently for different purposes. There is something amazing with being in the center of such a busy world where everything is in constant motion. But as an adult, the city is no longer such an oddity.

It becomes an everyday experience. The mass of people, cars, the noise, the shops, the buildings all fade into the background. Everything is accepted as part of reality. There is no longer amazement in learning new things. When people go to the city, they no longer look from left to right soaking in every detail. They simply go about their business without paying much attention except to see which route would go fastest or what store offers a better price. Such practicality becomes the main way of looking at things. This paradigm shift is the effect needed in portraying Mark Twain’s “Two Views of the River”.

There should be two clear distinct scenes – a colorful and full in awe scene and a more practical scene that looks at the big picture. This shift and the difference in the shots give off how people change in how they see the same things. From seeing the small details and reveling in them for the first scene, the last scene goes back and looks at the big picture and how it affects the viewer. The details are not in focus and the color fades. However, one is able to see a larger view of the world. This contrast between both scenes leaves, at the end, an open ended question regarding which viewpoint is better. 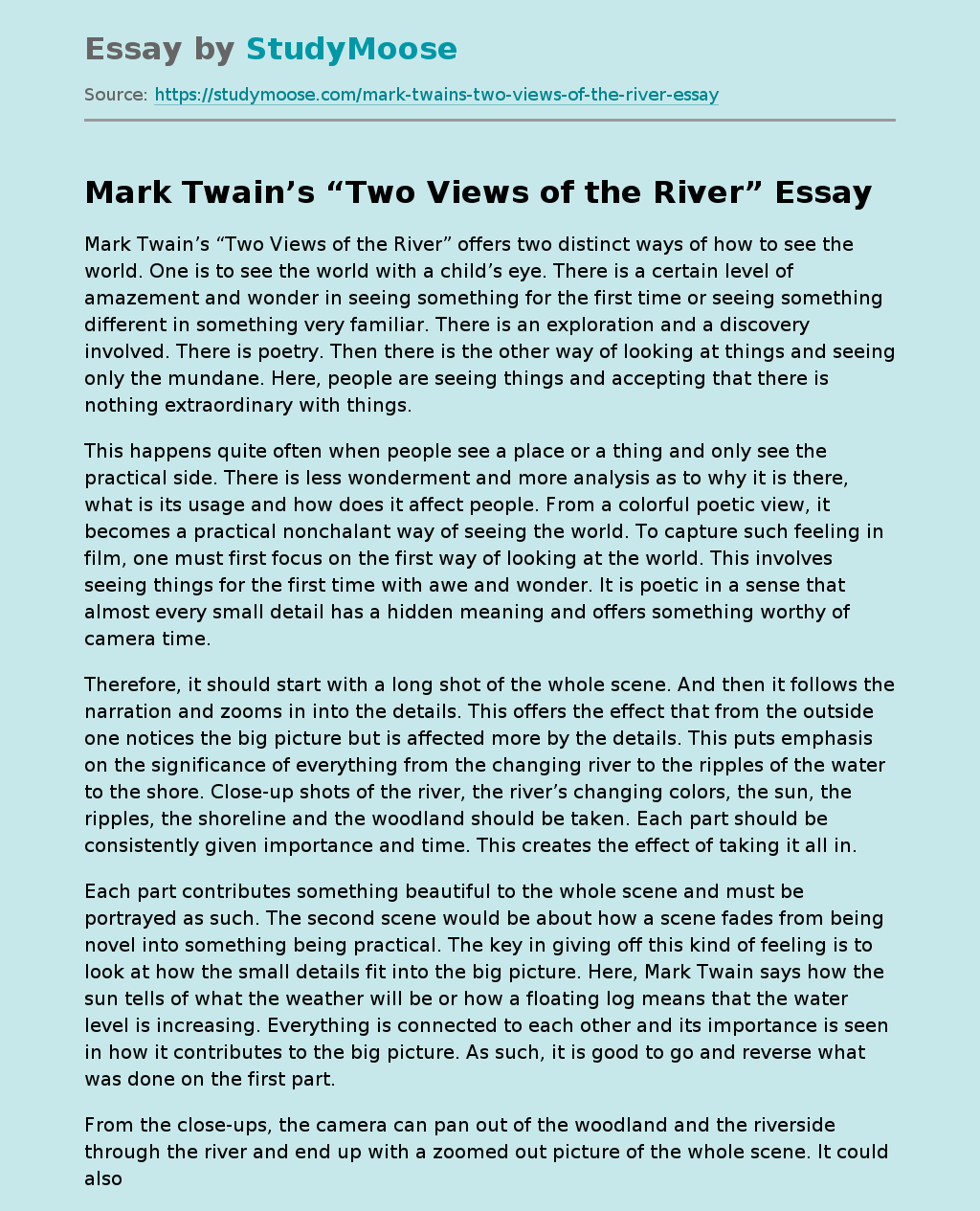