Competition between rivals causes a battle over the mead halls. Jealousy leads to rage between protagonists. These leaders include Unferth, Beowulf and Grendel. In the stories Beowulf and Grendel, there are fierce encounters between enemies who attempt to defend their boasts and seek revenge, leaving no true hero. “…I can show the wise Hrothgar a way to defeat his enemy and find respite…” (Beowulf 21). In Beowulf’s call to adventure, he is not invited to help the Danes; Beowulf takes it upon himself to go to the land of the Danes because he feels the need to relive his father Ecgtheow’s accomplishments.

Don't use plagiarized sources. Get your custom essay on
“ Mans Inhumanity to Man – Beowulf ”
Get custom paper
NEW! smart matching with writer

Beowulf was mocked by numerous people, such as Unferth, telling Beowulf that he is not man enough. “Unferth, a son of Ecglaf’s spoke contrary words…Beowulf’s coming made him sick…” (Beo 35). Unferth pushes the fact that Beowulf is only there to show off his strength. Beowulf is not a hero because he takes selfish credit for his actions.

Beowulf is fighting these creatures and obstacles with his band of men, “…Beowulf and his band of men crossed the wide strand, striding along…as they hastened to where…the young king Ongentheow’s killer…was dispensing rings inside his bawn…” (Beo 135).

In addition, he has achieved his goal of stealing the spotlight in the town of the Danes. Likewise, Beowulf keeps out the evil only when he is asked to, “A lot was to happen in later days in the fur of battle…the wide kingdom has reverted to Beowulf…” (Beo 151).

Because Beowulf shows arrogance, his leadership is dishonest. Beowulf’s drive to help the people did not fully exist throughout the story of Beowulf and Grendel. “…we belong by birth to the Geat people and owe allegiance to Lord Hygelac…” (Beo 19).

In the beginning of the story Beowulf was consistent with his actions, but as it drew near the end, there were no significant signs that proved Beowulf’s compassion toward the Dane people. His true ulterior motive was to prove to many that he was more than just Ecgtheow’s son, that he should be known as Beowulf, a great warrior. If Beowulf were a hero, he would have stopped Grendel early in his tracks. “…I have eaten several priests. They sit on the stomach like duck eggs…” (Gren 129). As Grendel is still successful in eating innocent people, he is neither a hero and can even be considered a villain.

Beowulf is given many chances to prove his heroism, but “…the builders are hammering, replacing the door for the fiftieth or sixtieth time…” (Gren 14). In both cases, neither figure is fighting for the right purpose. A true hero has a main purpose: to help the people consistently. Grendel pleaded to be a part of society that he was constantly rejected from. When Dane people see him they generally stared at him in disgust, “…Now you know how they feel when they see you…” (Gren 60). Time after time it Grendel is committing the crime, and killing many. He only appeared sane when gossiping about the Dane people.

And even in that case he is performing negative actions. Through the eyes of an impartial person, Grendel can never be considered hero. For example, “I leered in the rattling darkness of my tree. The name was ridiculous…” (Gren 100). In any attempt, a hero does not pick on people or kill innocent people. Grendel lacks the emotional disipline to be calm and settle things correctly, leaving him without the ability to be heroic. The want to show the bold true colors of each figure and win over a victory brainwashes the protagonists in both Grendel and Beowulf which concludes in no hero. 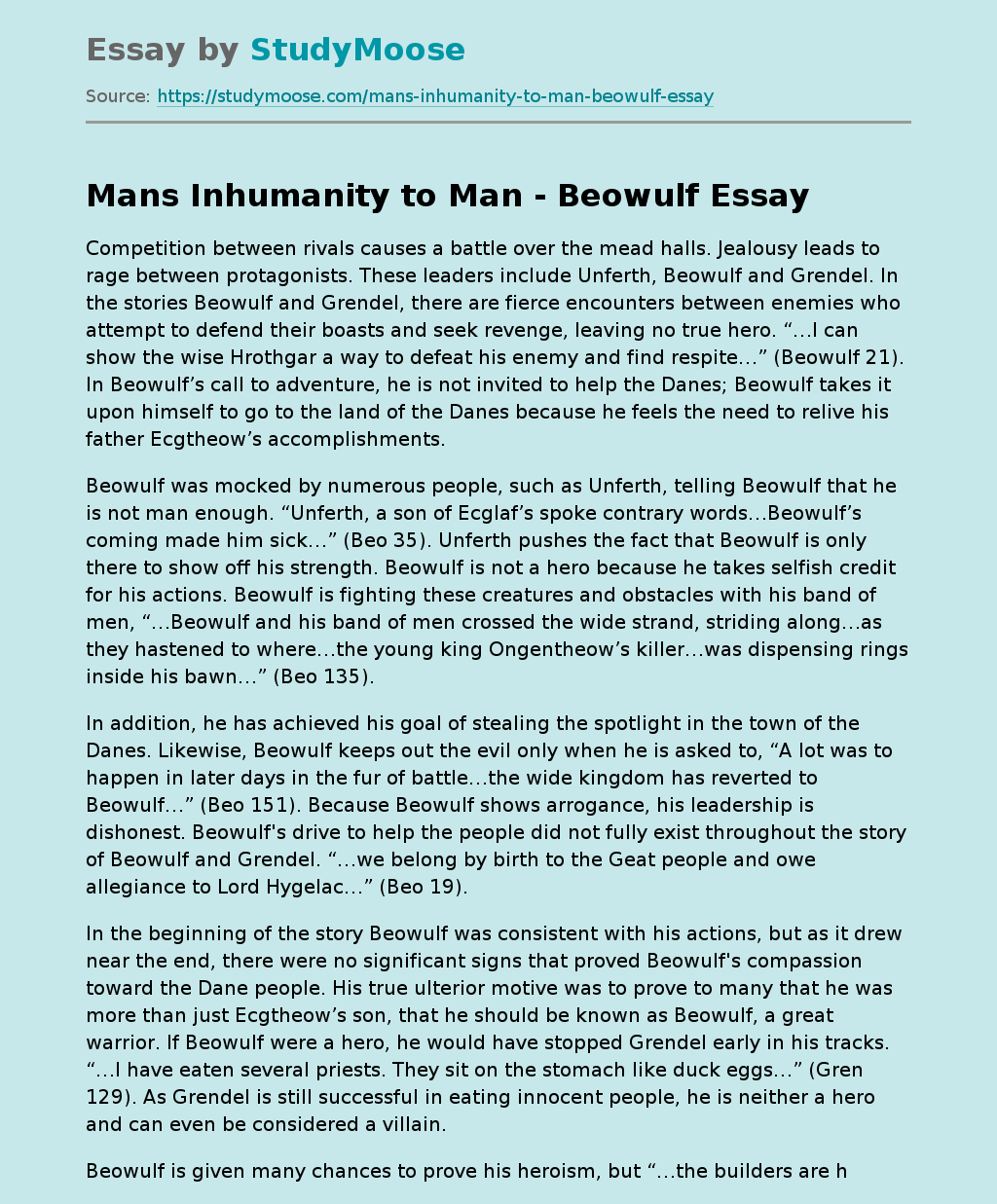