Night is a heart pulling memoir of its young Jewish author, Ellie Weasel, and his experiences in the Holocaust. The book begins with him living in the town of Sighet. He had a very sheltered life, with no accounts of negativity in the world. He and his family were also raised heavily on Jewish beliefs. One day a man by the name of Moshe the beadle comes to warn the people of the dangers of the Nazis. Unfortunately the people did not heed this and Sighet was invaded by Nazis.

Don't use plagiarized sources. Get your custom essay on
“ Dehumanization in Night ”
Get custom paper
NEW! smart matching with writer

Weasel and his family are taken and separated.

He only had his father now and they braved much torture and mal treatment by the kapos in the camps. At the end of it all only weasel himself made it out alive, though a brutal scar was marked upon his soul. He’d lost his family and his faith at those camps. But through all his sorrow and loss he wanted to share his accounts in this dark volume of his life, so that people understand what the Jews went through all those years ago.

This led him to write Night, where in which Weasel points out the inhumanity towards other humans during the holocaust as one of the themes of his chilling story.

One of the major factors that contribute to this theme is actually one of the first cruel things he encountered was the Nazis. At first on the other had he didn’t see them for the monstrous people that they were.

In the book Eliezer, Weasels character, even recalls, “Our first impressions of the Germans were most reassuring…. Their attitude toward their hosts was distant, but polite.” But this is just one of the many aspects of the holocaust that was tremendously misunderstood. But even more so unthinkable was the cold-blooded butchery of millions of innocent people. As the memoir progresses you will see how Weasel puts a spotlight of the actions of the Nazis by first seeing them as humans beings but then later on reveals the evil deeds that they commit upon innocent Jews.

Night also exhibits how inhumanity can spread to others who have been shown inhumanity. This is shown when the Jews start to turn on each other, instead of braving their harsh treatment together. It is even said by a Kapo: “Here, every man has to fight for himself and not think of anyone else. . . . Here, there are no fathers, no brothers, no friends. Everyone lives and dies for himself alone.” Because the Kapo are also just prisoners that are in control of the other prisoners, this is a very significant message. They were happy to help the Nazis in their plans for genocide. This led them to act really ruthlessly towards those under their command. In the fifth section of the book Eliezer mentions them as being, “functionaries of death.” The perspective of the Kapos show how those effected by the Holocaust can use inhumanity to infect other people like it as a virus. 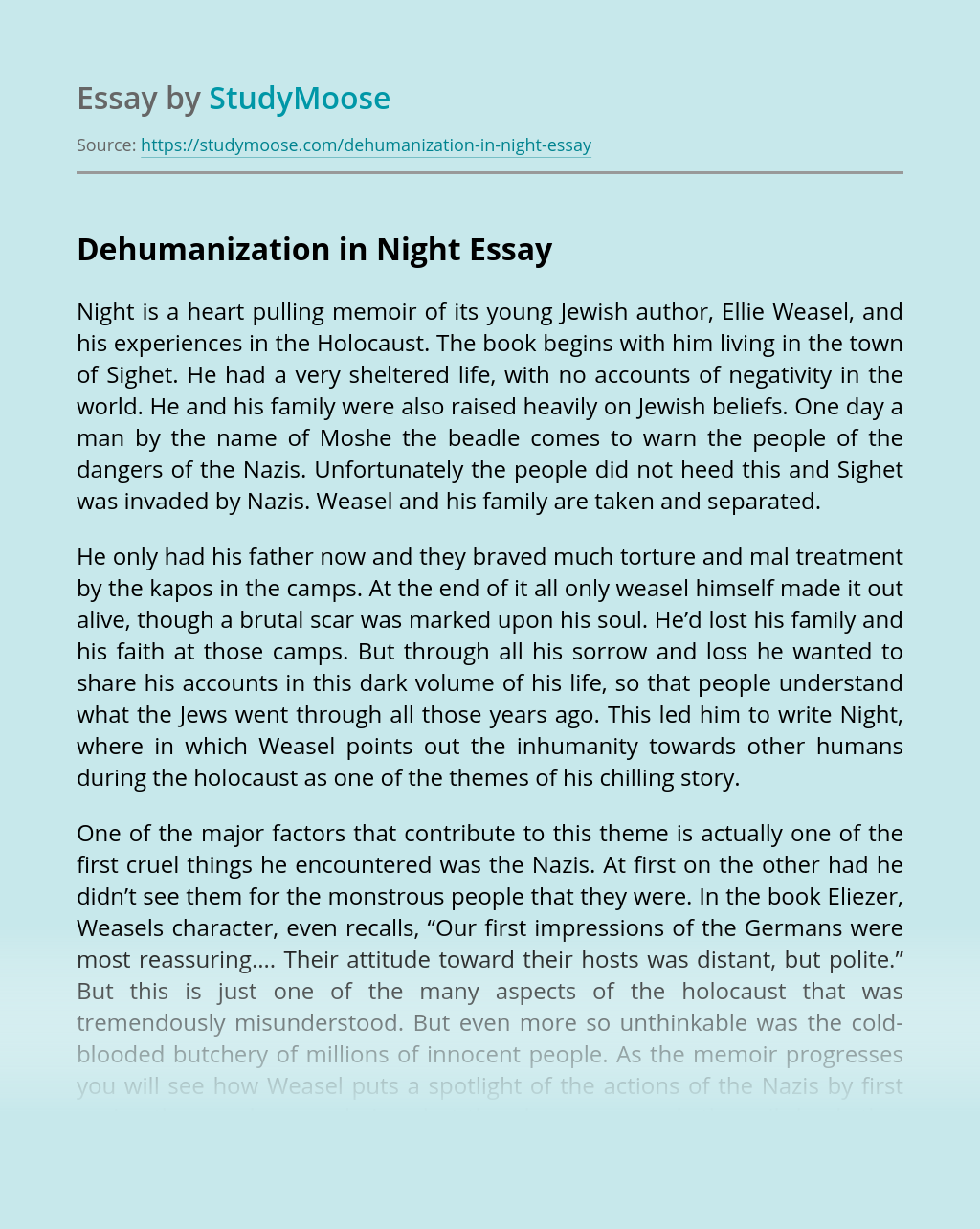