Industrial Revolution and Growth of Manchester

“Identify the issues raised by the growth of Manchester and analyze the various reactions to those issues over the course of the nineteenth century.”

Background: Manchester, England, became a leading textile manufacturing center soon after its first large mechanized cotton mill was built in 1780. Its population increased from 18,000 in 1750 to over 300,000 by the census of 1851, much of this made up of the working class and immigrants. In the 1832 Reform Bill, Manchester was granted representation in Parliament and middle-class men received the vote.

Don’t waste time
Get a verified writer to help you with Industrial Revolution and Growth of Manchester
Hire verified writer
$35.80 for a 2-page paper

After Queen Victoria’s visit in 1851, Manchester was granted a royal charter.

The early to mid 1800s in Manchester was a time of what could be seen as prosperous growth. Between 1750 and 1850 Manchester nearly quadrupled in size (DOC 1). The radical changes that occurred in this 100 year time span brought forth different responses from the social, economic, and political stand points.

Visitors, such as Robert Southey, from England, and Alexis de Tocqueville, from France, did not see Manchester as a glorious sight.

Robert Southey says that he could not imagine a more destitute city (DOC 2). He probably saw the same plumes of smoke that were depicted in The Graphic’s magazine picture of the Irwell River (DOC 11) The factories at this time, as one could expect, were putting forth pollution, and in a sense, laying a black cloud over Manchester. According to the French visitor Tocqueville, the city was leaving the civilized side of man and turning him savage (DOC 5). Yet, this same city that was looked upon by so many, was actually giving forth good for the rest of the world.

Frances Anne Kemble who was an actress, poet and dramatist actually visited Manchester and turned out disgusted. The workers were protesting to the lead officials, but they didn’t care, because the money flowing from the factories landed in their pockets (DOC 4). In a preface to the business directory, the Wheelan Company, who was one of those receiving the money, saw Manchester as alive and busy. This “workshop of the world” was a glamorous place to be (DOC 9). Obviously, the corporations and people receiving the money would automatically like Manchester. Perhaps the wonderful money signs in their eyes were filtering out the black gloom.

The liberal Member of Parliament and historian, Thomas Macaulay, tries to say that working in factories is better than working on a pretty cottage, which, “peasants wouldn’t have anyways” (DOC 3). The factory could actually be prettier than the cottage life because peasant life wasn’t. According to Flora Tristan, French socialist and women’s rights advocate, progress was being accomplished at the price of men’s lives (DOC 7). The factory owners did not take care of their workers, the workers were paid, and that was that.

According to a public health reformer, the factory life killed more than the wars did (DOC 6). He seems to be asking that if there isn’t a war, why are there men dying when they don’t have to. The English journalist and historian, William Abram noted that there was no discontent among the workers, and that because of the social reforms life was better (DOC 10). It was true that factory life had improved, but neither did that mean people were happy or life pleasant.

From different viewpoints came different interpretations. If two kids get in a fight each is going to tell a different story as to how it happened, and if they had a good reason. The same thing goes for that of the time. The social reformers thought Manchester was a horrible sight, as did the visitors. The owners and government officials usually said that they saw Manchester as a good place because they were making the money. From the workers stand point – they had a job – they didn’t like it, but they had one.

Industrial Revolution and Growth of Manchester. (2016, Jul 05). Retrieved from http://studymoose.com/manchester-industrialization-and-growth-essay 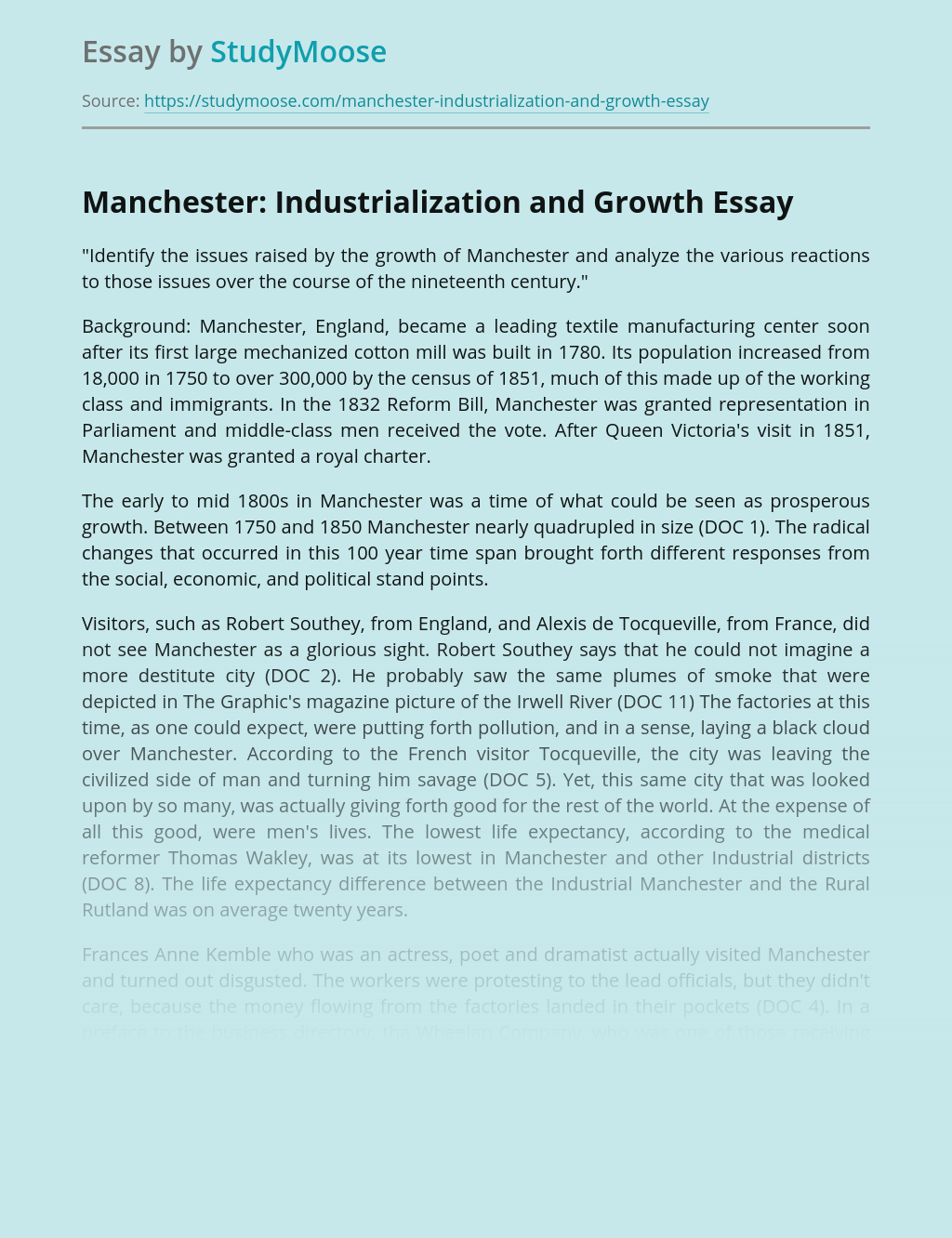 Don’t waste time
Get a verified writer to help you with Industrial Revolution and Growth of Manchester
Hire verified writer
$35.80 for a 2-page paper
Stay Safe, Stay Original