“Mama Might Be Better off Dead: the Failure of Health Care in Urban America” by Laurie Kaye Abraham, follows a families struggles over the course of three years in a poor Chicago neighborhood. Abraham points out specifically how the health care system in the United States has failed the different members of the poverty stricken Banes family. The main character, Jackie has the responsibility of taking care of her sick and elderly grandmother. Jackie also cares for her three young children with little help from her husband, Robert who also suffers from various illnesses.

Don't use plagiarized sources.
Get Your Custom Essay on Mama Might Be Better Off Dead Just from $13,9/Page

While, there are some government programs set up to help families like the Banes’, the health care system is certainly lacking.

Cora Jackson is an African American woman in her late sixties when the book begins. She suffers from many chronic conditions including high blood pressure and diabetes. Cora had a leg amputated because of complications from her diabetes. Diabetics often have poor circulation in their extremities which hinders wounds from healing properly.

Besides being bed-ridden and wheel chair bound, Mrs. Jackson suffers from bed sores and incontinence. She also sufferers from severe depression over losing her leg which is common among many with physical disabilities. Despite, her poor health Cora Jackson remains the matriarch of the family.

Mrs. Jackson raised Jackie as a young girl and before becoming ill, had a remarkable relationship with her great-granddaughter Latrice. As time goes on, Mrs. Jackson becomes more ill and Latrice begins to pull away from her great-grandmother. This seems understandable because it must be very difficult for children to understand and deal with the terminally ill. Jackie however, remains warm and caring toward her grandmother. She expresses her frustrations, but few of them are aimed at her grandmother. Most of them are aimed at the doctors and particular government agencies set up to treat and help her grandmother.

Obtaining health care services is not an easy task for Cora Jackson. Jackie, the primary caregiver for Mrs. Jackson, experiences struggles on a day to day basis. For example, Mrs. Jackson suffers from incontinence which makes her a candidate for adult diapers. However, Medicare sees adult diapers as more of a convenience item and do not see them as medically necessary. Medicare also covers a large portion of health visits and treatments but they fail to understand the transportation needs of disadvantaged patients. As a result, Mrs. Jackson is forced to miss many scheduled appointments. She misses out on many treatments that are recommended by her doctors. Consequently, Cora is forced to have her remaining leg removed because of an infection which could have been caught sooner. Jackie resorts to calling an ambulance to transport her grandmother to the hospital. This results in in some problems because the ambulance takes her to the closest hospital which is does not have all of her medical records.

I am puzzled by many of these rules and policies. First off, I do not understand how adult diapers are not deemed medically necessary. Diapers are seemed necessary for infants. Why aren’t they necessary for adults who suffer from incontinence? Also, adult diapers help prevent bed sores which many elderly, bed-ridden patients suffer from. This can prevent future hospitalizations and procedures caused by infection. I also have a problem with Medicaid’s spend down policy. Every month, Mrs. Jackson is required to spend a certain amount on medical needs in order to become eligible for Medicaid. By the time, she meets the requirement, she has to do it all over again. Also, there are some services that the Banes are not aware they are entitled to. For example, Medicare covers home health aides for those sick enough to require visits from a home nurse. Jackie turns down this service because she is mistaken and believes it will cost her 110 dollars a month. No one ever tells her this service is free.

There are many changes in the health care delivery system that would have improved the experiences of Mrs. Jackson. First of all, keeping track of a monthly spend down of an elderly, disabled patient is ridiculous. In Mrs. Jackson’s case, she needed Medicaid to cover her transportation needs. Its close to impossible to schedule appointments and procedures if you are not sure how you are going to get there. Other patients use Medicaid for numerous reasons. A better option for Medicaid would be to take an average of a few months expenses and use that to determine eligibility for longer than a month at a time. It is common for patients to spend the same amount on medication each month. They also try to visit doctors on a regular basis.

Knowing they are covered by Medicaid for longer than a month, would be a huge relief. The patients could keep their appointments without worrying about transportation costs. Also, medicine could be taken as directed instead of trying to make it last longer in fear of losing coverage the next month. Another area which needs addressing is in the area of medically necessary items. Who determines if adult diapers is necessary or a convenience? For an elderly person who does not want to walk to the wash room after going to the bathroom, I can see how diapers would be convenient. But what about the person with no legs and not adequate enough help to lift them out of bed? I would definitely say adult diapers is medically necessary for this person.

As a social worker in health care, I would definitely try to be of assistance to Mrs. Jackson. First of all, I would encourage Jackie to take advantage of the services set up to help her and her family. Then I would make sure she was aware of all they were entitled to. It is very common for poor people not to understand government policies, particularly Medicare and Medicaid. I feel there should be more services to explain and help people understand certain policies. Regular visits from a home health aide could have helped both Jackie and Mrs. Jackson immensely. I would talk to her about the stress of taking care of three children, a sick husband and an elderly, disabled grandmother. Paying attention to Jackie’s needs, as she is the primary caregiver, may give her a more clear mind to make decisions for her grandmother.

I would also discuss with Jackie all of her options. Jackie could have put her grandmother into a nursing home but neglected to do so until the very end of her illness. I would weigh out the advantages and disadvantages of Mrs. Jackson living in a home. Jackie was scared that by putting her grandmother into a home, she would feel unloved and neglected. I would explain to Jackie, that the care she would receive would be twenty-four hours a day. This would mean, no more missed doctors appointments, no more missed medication and all of her medical records would be in one place. I feel their would be an increase in her quality of life. Jackie states “Mama, might be better off Dead”. Why not try putting mama in a nursing home first?

In conclusion, “Mama Might Be Better off Dead: the Failure of Health Care in Urban America” really shows many areas of human suffering. In a country based on freedom and equality for all, the area of health care could not be further from equal in America. Every day we see talks of health care reform in the news. Political candidates form plans in their campaigns. However, this book puts a real face on the failure of health care in America. I hope more people become aware of how badly change is needed and they choose to become actively involved in the reform of the system.

Mama Might Be Better Off Dead. (2016, Mar 19). Retrieved from https://studymoose.com/mama-might-be-better-off-dead-essay 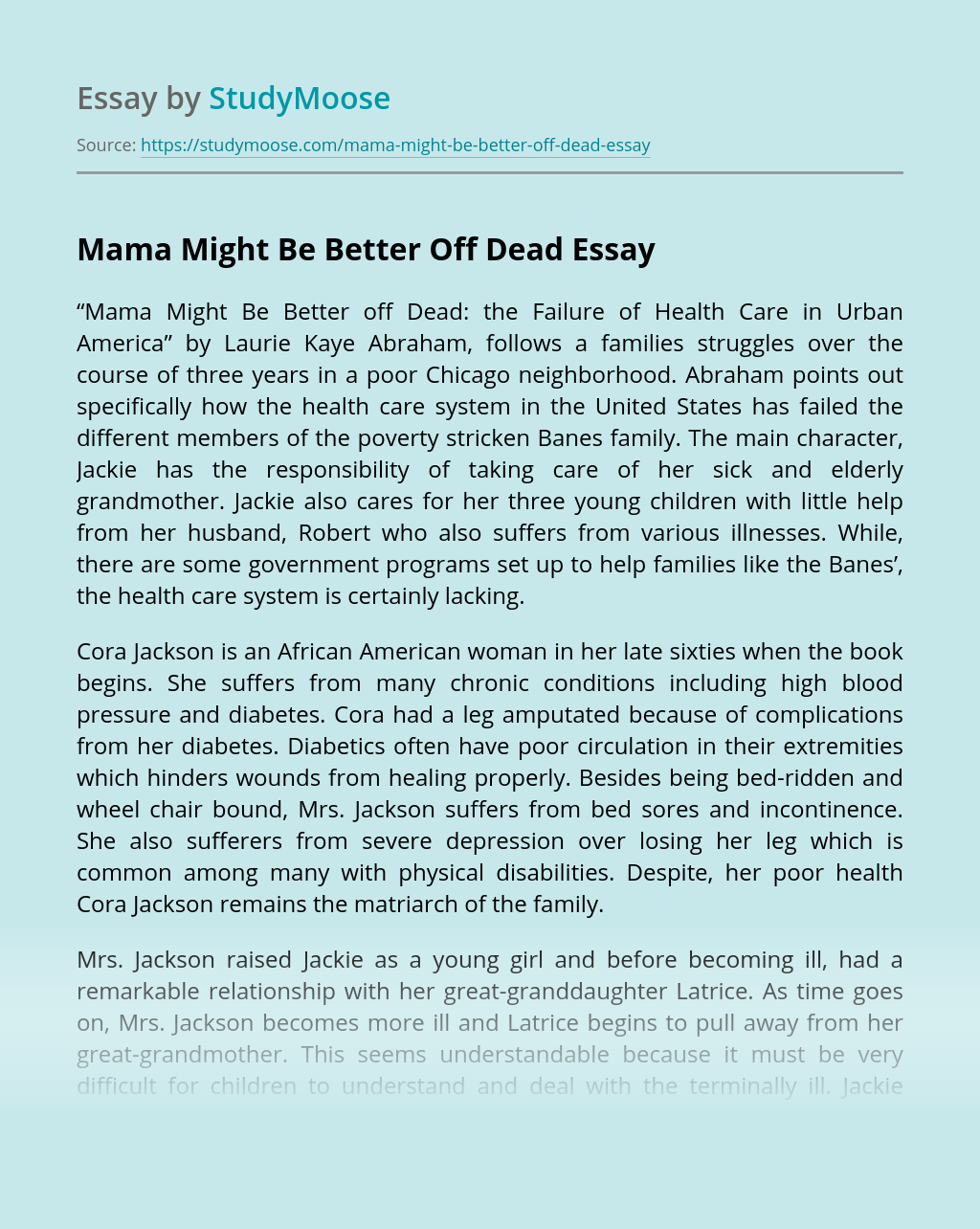 Everyone experiences feelings; they cannot be ignored as we have no control over them. In ‘Harmonium’, Simon Armitage explores the feelings of the relationship between himself and his father, using the extended metaphor he presents the instrument ‘harmonium’ to test his feelings that exists between the father and son. The name itself ‘harmonium’ immediately highlights... VIEW ESSAY

How does Billy’s tall story in “A Kestrel For A Knave” and “The Poor Relation’s Story” By Charles Dickens influence your opinion of the characters? Billy Casper, the main character in “A Kestrel For a Knave” has a very poor lifestyle. He is a short, skinny destitute teenager about to leave high school. He lives... VIEW ESSAY

Andrew Samluck5/11/19KNES 353Dr. SunMedia Analysis PaperIn this paper I will look at how Barry Bonds was portrayed in the media based on race and his character. I expect to see race play a factor in the media narratives leading up to his breaking of the all-time home run record but not after he broke the... VIEW ESSAY

Background of the study Computers have become a requirement in the business industry it easily completes duties that are tedious and timely foe humans. The business uses of computer are extensive. Although many of the computer duties are not irreplaceable, business has become dependent on their accuracy and timeliness. Many businesses use accounting software to... VIEW ESSAY