I have picked the first method out of the three options of experiments to conduct based on the flexion of a cantilever. I now have to decide on a method of collecting and processing the data for the first method, taking care to reach a value for Young modulus with some estimate of accuracy attached to it.

7. Screw gauge with a sensitivity of 0.1mm (Micrometer)

8. Vernier Calipers with a sensitivity of 0.2mm

Vernier Calipers – read the sliding scale along the top and bottom

The weights that are hung on one end of the ruler will vary each time by adding 50g to the previous weight and each time the deflection of the ruler is read until 450g of weights have been added.

The relationship for calculating Young modulus in this experiment is:-

L = length of the overhang of the ruler (cantilever)

Y = depression at the end (deflection of the ruler)

B = width of the ruler (strip)

D = thickness of the ruler (strip)

We repeat the above experiment two more times by measuring again the deflection of the ruler with the same weights and from the same side of the ruler. As we have three sets of results we can take an average to give a result that is more accurate.

As we are trying to prove that, as Hooke’s law says if one side is in tension the other will be in compression hence the same way in the experiment one end of the ruler was clamped and weights were hung on the other end hence one side of the ruler was under tension and the other in compression. Also from the preliminary work done and my knowledge from the text book this method proved to work. Hence I adopted this method.

Before we went onto the main experiment, we spent out first lesson conducting a preliminary experiment to get a feel of how everything works.

Below is a graph to show Young’s modulus of the ruler:-

Also the value for the width of the ruler was measured using the vernier calipers and this was done 5 times to give an average value.

There were other values taken as well like the thickness (D) of the ruler was measured with a screw gauge 5 times to give an average value.

The length of the overhand was approximately 90cm.

I also used the value of the gravitational force which is a constant 9.80Nkg -1.

Below is the graph to show the nominal mass against the average depression.

After the experiment had been conducted, each 50g mass was weighed individually to see if there was any error created. The following was found:

As can be seen from the above table, the massed used had slight inaccuracies in their value. This would have affected the results slightly and because of this I now need to find out how much the results were affected. To do this I will simply change the Nominal Mass on the following graph to Actual Mass.

To calculate the gradient of the graph the value of y would need to be divided by m (Y/M).

The gradient as calculated from the graph was 3.2475.

Therefore substitute the value of 3.2475 for M/Y

From my research on, I found out that the Young’s Modulus value for wood is:-

By looking at the actual value and the value obtained from the experiment, it can clearly be deduced that the experiment was accurate enough to obtain a rough Young’s Modulus value for wood. In order to gain a value closer to the actual value, the sources of error need to be considered. These errors are either experimental errors or human errors in measurement and through the general conducting of the experiment.

The experiment was carried out fairly accurately but still there were errors that were consistent and variable throughout the experiment. As the consistent errors were that the screw gauge that I used to measure the width of the ruler had a zero error of -0.01mm. As the ruler was clamped on one end and on the other end the weights were hung there was a ruler that was clamped along with this ruler so that the deflection could be measured but both of these rulers had a bend initially because of its own weight but these deflections were different hence this slightly affected my accuracy of my final result. The variable error was that, the weights were not hung from a fixed position this also could have affected results.

How to Minimise Errors

As for the zero error in the screw gauge was -0.01mm. I improved my results by adding this error onto the readings that I got for the width of the ruler. As the weights were hung at different positions I took three reading for each weight and its deflection so that I could get a more accurate result. Also for the other readings, like measuring the width and the thickness, they were measured a number of times so that the results could be more accurate.

When calculating the value for Young’s Modulus there were errors, although quite minimal, in the constants used in the original equation which calculates the Young’s Modulus value. Below I will show the percentage errors for each constant:-

There could be many errors in the experiment that could have affected the accuracy of the final result. First of all, when measuring the deflection of the ruler with certain weights as they had an initial bend due to their own weight. The screw gauge that I used during my experiment to measure the breadth of my ruler had a zero error of -0.01mm and the weights that were hung on one end of the ruler was not hung at a fixed position which could have affected the value for the deflection.

Systematic errors in the experiment were; the zero error in the screw gauge, the initial bend of the ruler due to its own weight, hence this had an impact on the measurement of the deflection throughout the experiment.

Vernier calipers used had a sensitivity of 0.2mm.

The experiment was carried out as accurately as I could and according to my result and the graph I think that there were no anomalous results in my experiment.

Throughout the experiment the same apparatus was used even for the repetitions. The only thing that varied during the repetitions was that I used different sides on the ruler to check that the deflections at each side were almost the same.

The method used for the above experiment was quite reliable. As the apparatus used were the same throughout the experiment.

To improve the method by which I carried out my experiment will be to use a screw gauge, which does not have a zero error. Fix a point on one end of the ruler for the weights to be hung so that there are no errors while reading the deflection of the ruler. Use a fixed length for the overhang. Initially see that the ruler does not have bend, if it does use a similar ruler with the same amount of bend length to place it next to the ruler on which weights are hung to get an accurate reading for the deflection.

Making sense of data - finding a value for the young modulus of a flexxible strip of material. (2020, Jun 02). Retrieved from https://studymoose.com/making-sense-data-finding-value-young-modulus-flexxible-strip-material-new-essay 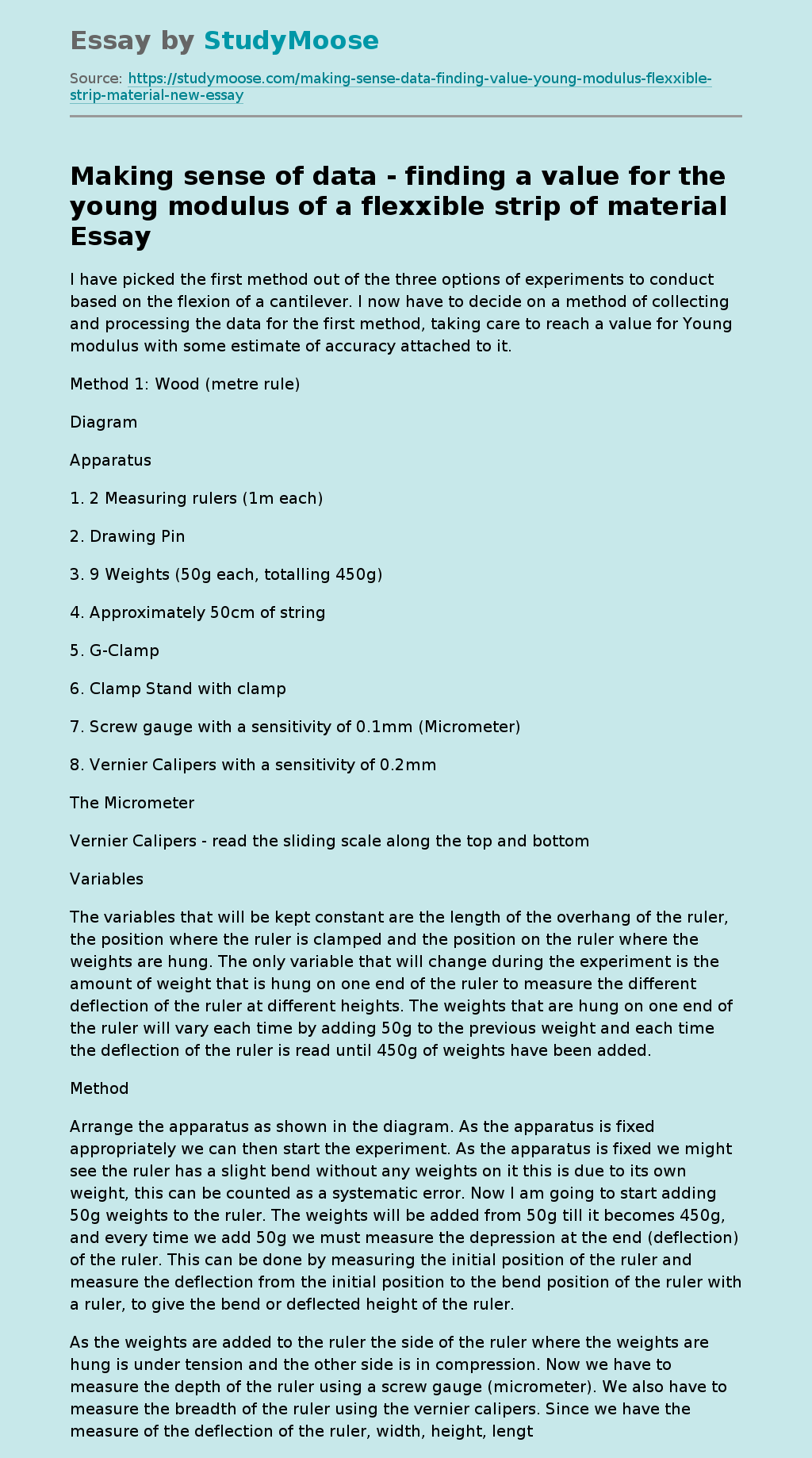