Is Macbeth a Tragic Hero?

Aristotle defined a tragic hero using a series of points, these points showed what characteristics or situations a tragic hero would define himself/herself by. The first point was ‘A Hero whose status means that his downfall will be significant, affecting many people’. We know that Macbeth’s downfall will affect the future of Scotland as he is a prominent person in Scotland’s society; the King. ‘Do we but find the tyrants power tonight, Let us be beaten, if we cannot fight?’ This shows the tyrant – Macbeth – holds so much power within his hands.

Don't use plagiarized sources. Get your custom essay on
“ Is Macbeth a Tragic Hero? ”
Get custom paper
NEW! smart matching with writer

Macbeth also has a good name, ‘This tyrant whose sole name blisters our tongues, was once thought honest; you have loved him well;’ His climb to power has affected many people as his position heightened. Now at this point, when Macbeth has reached the top of the ladder, he has the lives of many people and his downfall will being freedom to those close to him.

‘Those he commands move only in command, nothing in love.’ The people around Macbeth feel forced to bow to him; this is an example of this power and status over people.

The second of Aristotle’s points is ‘A tragic hero is one whose suffering reveals essential truths about humanity.’ These truths show themselves within Macbeth throughout the play. One of these truths is greed. This develops throughout the play and his want for power gets greater. ‘Glamis, and Thane of Cawdor. The greatest is behind.’ This shows he thinks the greatest is still to come, showing greed that he expects more to come.

Another of these ‘essential truths’ about humanity is ambition. Macbeth doesn’t find his own ambition though, it is pulled out of him by his wife. ‘Thou wouldst be great, Art not without ambition, but without the illness should attend it.’ This shows that Macbeth indeed has ambition but without a certain amount of ruthlessness and desire it will go nowhere. ‘If we should fail? We fail? But screw your courage to the sticking – place And we’ll not fail’ Another essential truth in this is desire, and we see Macbeth’s desire grow as he sees power within reach, this spurs on his desire. ‘Two truths are told As happy prologues to the swelling act of the imperial theme’ He sees kingship in reach, so therefore he must have had that desire in him before he found it. This is revealing that everyone has desire, but sometimes it only comes out when you need it. We can see that Lady Macbeth brought out this desire in him, but he made it grow.

The third of Aristotle’s points to define a tragic hero is ‘A hero who greatness of character and talent are tragically lost through circumstance.’ We can see Macbeth’s greatness of character when he comes victorious from war. ‘For brave Macbeths – well he deserves that name’ The war has shown how courageous and great he is. The circumstance of war, ‘noble Macbeth’ We have seen him triumphant.

Seeing the witches was also a course of circumstance that sees Macbeth ultimately to his downfall.

Is Macbeth a Tragic Hero?. (2020, Jun 02). Retrieved from https://studymoose.com/macbeth-tragic-hero-new-essay 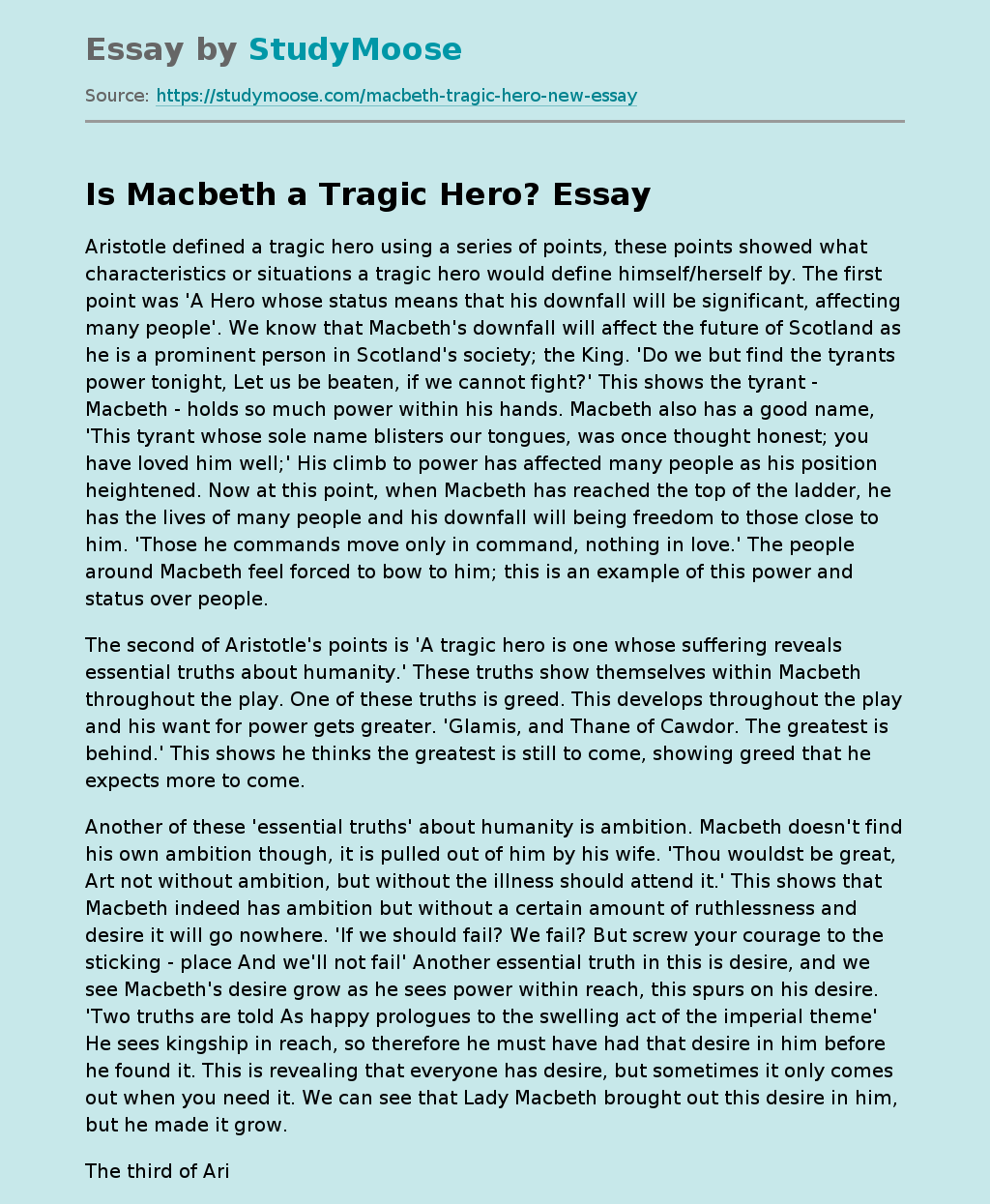