The flow of blood stopped and History recorded a tragic death. King Duncan over ten years was the most trusted noble. He was a good and Godly man, friend to the poor and defender of the downtrodden. He had been given the title, “Thane of Fife”. But he is no more with us. Our King Duncan was murdered last night according to the Scotland police authority. King Duncan was assassinated during his stay at Macbeth’s castle in the early morning on (May 12).

Don't use plagiarized sources. Get your custom essay on
“ Macbeth Newspaper Article ”
Get custom paper
NEW! smart matching with writer

He died surrounded by those that loved him and his legacy will live on. Duncan’s two guards were considered the main suspects, but were slaughtered by Macbeth at the scene. Authority has conformed the two guards responsible, but has no plan to charge Macbeth either. General Banquo told the police, everything looked good in the dinner.

Duncan seemed to have a pleasure time that night. He announced Macbeth and Lady Macbeth as the best host and hostess in the world and had several dances with Lady Macbeth.

They had been celebrating until eleven p. m. late at night. When the celebration finished, his Highness King Duncan retired back to his room. Other witnesses also agreed with Banquo’s statement. However, in the next morning, Duncan was found dead in his own bed. Nobel Macduff was the one who has found the King’s body.

Macduff told the police, he and Nobel Lenox arrived at the castle with some other servants around 7:30 am. Everyone in the castle seemed still sleeping at that time.

They knocked the gate several times before the porter opened it. Then, Macbeth led two to the King’s chamber. While Macbeth and Lenox stayed there discussing the scary storm on Friday night, Macduff discovered horrible scene along. “O Horror, Horror, Horror! Tongue nor heart can conceive nor name thee! ” Macduff cried (Pg 65, line 73). 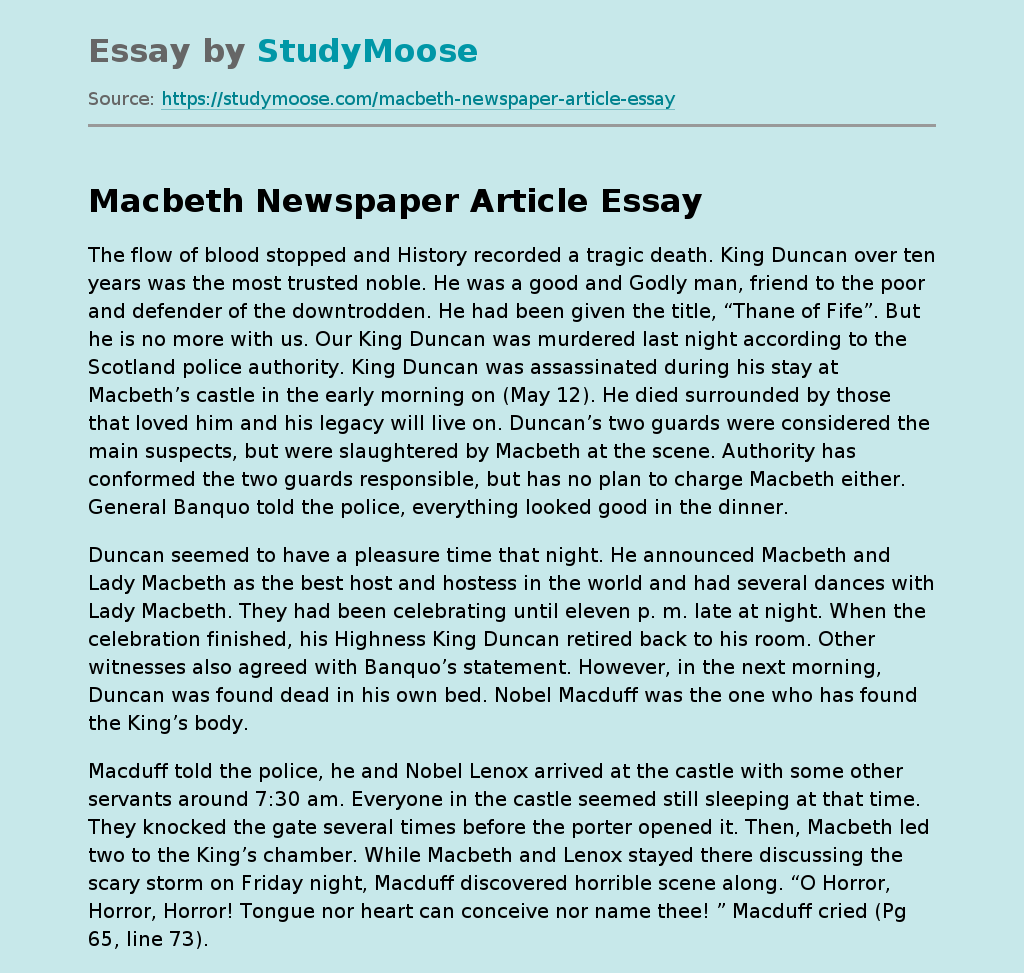