The article selected for this review was a two-part article discussing the many biological factors that contribute to the development of maximal power as well as how training programs can be manipulated to most effectually improve maximal power production. Maximal power production is relevant to the field of speed and agility as it applies to generic dynamic movements that are seen within most sports such as sprinting, change of direction, and jumping. The article that will be discussed is not original research articles but rather a comprehensive review of previous bodies of work, focusing on the variables, data, and results of previous authors to draw conclusions developing neuromuscular power.

Don't use plagiarized sources. Get your custom essay on
“ The article selected for this review was a twopart article discussing the ”
Get custom paper
NEW! smart matching with writer

As mentioned, the article selected was a two-part article, part one investigated the biological aspect of neuromuscular power, meaning it focuses on what happens at the muscular, and neural levels during training. To first understand maximal power, we must first understand what power is, the authors state that maximal power describes the highest level of power (work/time) achieved in muscular contractions (Gollnick & Bayle, 1986; Cormie et al.

, 2011). Meaning that power represents the greatest instantaneous power during a single movement performed with the goal of producing maximal velocity at takeoff, release or impact (Kraemer, Newton, 2000; Kraemer, Newton., 1994). There are fundamental relationships between force and velocity, length and tension when talking about muscle mechanics. Cormie, McGuigan, & Newton discuss the inverse relationship between force and velocity during concentric muscle actions, meaning as force increases velocity decreases and vice versa. This relationship is relevant because these power movements quantify the ability of the neuromuscular system to function under various loading conditions (Cormie, McGuigan, & Newton, 2011 p.

18). The length-tension relationship is the ability of a skeletal muscle to generate force and is critically dependent on sarcomere length. The sarcomere is the smallest contractile unit in the muscle and is made of myosin and actin filaments (Chandler & Brown, 2013). The overlap between these filaments forms cross-bridges has an effect on the amount of force that can be produced and therefore plays a vital role in maximal power production (Cormie, McGuigan, & Newton., 2011 p. 19). The type of muscle action meaning concentric, eccentric or isometric contraction or a combination also influence the muscles ability to generate power. The combination of eccentric and concentric actions forms the most common type of muscle function and is termed the stretch-shortening cycle (SSC) (Cormie, McGuigan, & Newton., 2011 p. 20). The SSC has many mechanisms at play and seems to be an issue of debate. As mentioned, the ability to generate power is dependent on the contractile capacity of the muscles involved, which is based on morphological factors, these factors include fiber type, cross-sectional area, and angle of pennation. The main fiber types discussed are type I and type II fibers, type II fibers or fast-twitch fibers have a greater capacity to generate power per unit cross-sectional area compared to type I fibers and it is known that the amount of force that a muscle fiber can produce is directly proportional to its cross-sectional area. (Cormie, McGuigan, & Newton., 2011 p. 22). Type II fibers have also been observed to have significantly greater specific force than type I fibers, the shorter contraction time of type II fibers is due to high ATPhase levels which means more rapid force production (Cormie, McGuigan, & Newton., 2011 p. 22). Therefore, the maximal power output of a muscle is influenced by its fiber type composition, making type II fibers more advantageous for speed and agility compared to type I fibers (Cormie, McGuigan, & Newton., 2011 p. 22). The angle of pennation also plays a vital role in power production. The pennation angle is the angle between the muscle’s fascicles and the line of action, as pennation angle increases, more contractile tissue can attach to the tendon or bone and the muscle can produce more force (Cormie, McGuigan, & Newton., 2011 p. 25). Kawakami et al. (1993) showed that highly trained sprinters possessed smaller pennation angles than both lesser trained sprinters, whereas bodybuilders had greater pennation angles. These findings by Kawakami et al. relate back to the previously mentioned force-velocity curve, the more force that is produced (greater pennation angles) the less velocity. There are many neural factors that come into play when it comes to the ability to generate maximal power. Motor unit recruitment, firing frequency, motor unit synchronization, and muscular coordination all play a role in power development. Motor unit recruitment follows the size principle which stated that motor units (muscles) are recruited from smallest to largest based on increasing force but can be trained to eventually skip the smaller units altogether (Henneman et al., 1974; Chandler & Brown., 2013). Firing frequency represents the rate at which the neural signal reaches the muscle, firing frequency can enhance the magnitude of force generation and the rate of force development (Cormie, McGuigan, & Newton., 2011 p. 27). Synchronization occurs when two or more units fire together and more frequently, this may enhance the rate of force production. Synchronization leads to the muscular coordination of the agonist, antagonist, and synergist muscles which leads to more effective and efficient movement. The second article on the development of maximal power discusses how the development of training programs can be used to effectively improve maximal power production in dynamic athletic movements (Cormie, McGuigan, & Newton., 2011 p 125). Traditional strength training and plyometrics are among the most frequently used strategies to improve sports performance, other techniques include ballistic training and Olympic weightlifting. As athletes develop maximal strength, they will also see improvements in other performance characteristics of neuromuscular function such as power and time to exhaustion (Tan., 1999). Traditional resistance training exercises have been shown to successfully improve maximal power output in dynamic, sports-specific movements (Chandler & Brown, 2013). This is specifically true when it comes to the early development of strength, as athletes develop their strength and power, further training-induced improvement in maximal power requires the involvement of other, more mechanically specific movements (Cormie, McGuigan, & Newton., 2011 p. 129). Plyometrics which are characterized by the stretch-shortening cycle, which is ballistic in nature, meaning they are required to circumvent any deceleration phase by requiring athletes to accelerate throughout the entire range of motion to the point of projection (Cormie, McGuigan, & Newton., 2011 p. 133). As a result, training programs incorporating plyometric exercises are often very effective at improving maximal power in sports-specific movements (Cormie et al. 2011 p. 133). The ability to maximize power production is not soulfully dependent on the type of movement pattern but also load specificity. Power output varies as the load changes from heavy to light (Cormie, McGuigan, & Newton., 2011 p. 134). Heavy loading, greater than 80% of 1RM has been shown to improve power output, light loads are considered loads of 0-60% of 1RM and are recommended to increase speed as they allow athletes to train at velocities similar to game velocities (Haff & Triplett pg. 458). Cormie et al. 2007 found that peak power is reached with extremely light loads of 0-30% of 1RM, and power output is most effective at 75-90% of 1RM. However, when developing and prescribing a power program for athletes it is important to keep in mind the athlete’s baseline levels as stronger athletes will generate greater power outputs at lower loads compared to weaker athletes. Just as well as individual differences do exist which means the load that may maximize one athletes’ power may not work for another. The article discussed was a two-part article covering the biological factors and training methods that help to develop neuromuscular power. Both part 1 and part 2 strength and power are interrelated, therefore increasing strength with increase power making these articles relevant in the realm of speed and agility. As noted in the introduction these articles were not original research but rather a review of the current literature, which may cause limitation due to the author’s interpretation of the previous research.

The article selected for this review was a twopart article discussing the. (2019, Aug 20). Retrieved from http://studymoose.com/the-article-selected-for-this-review-was-a-twopart-article-discussing-the-essay 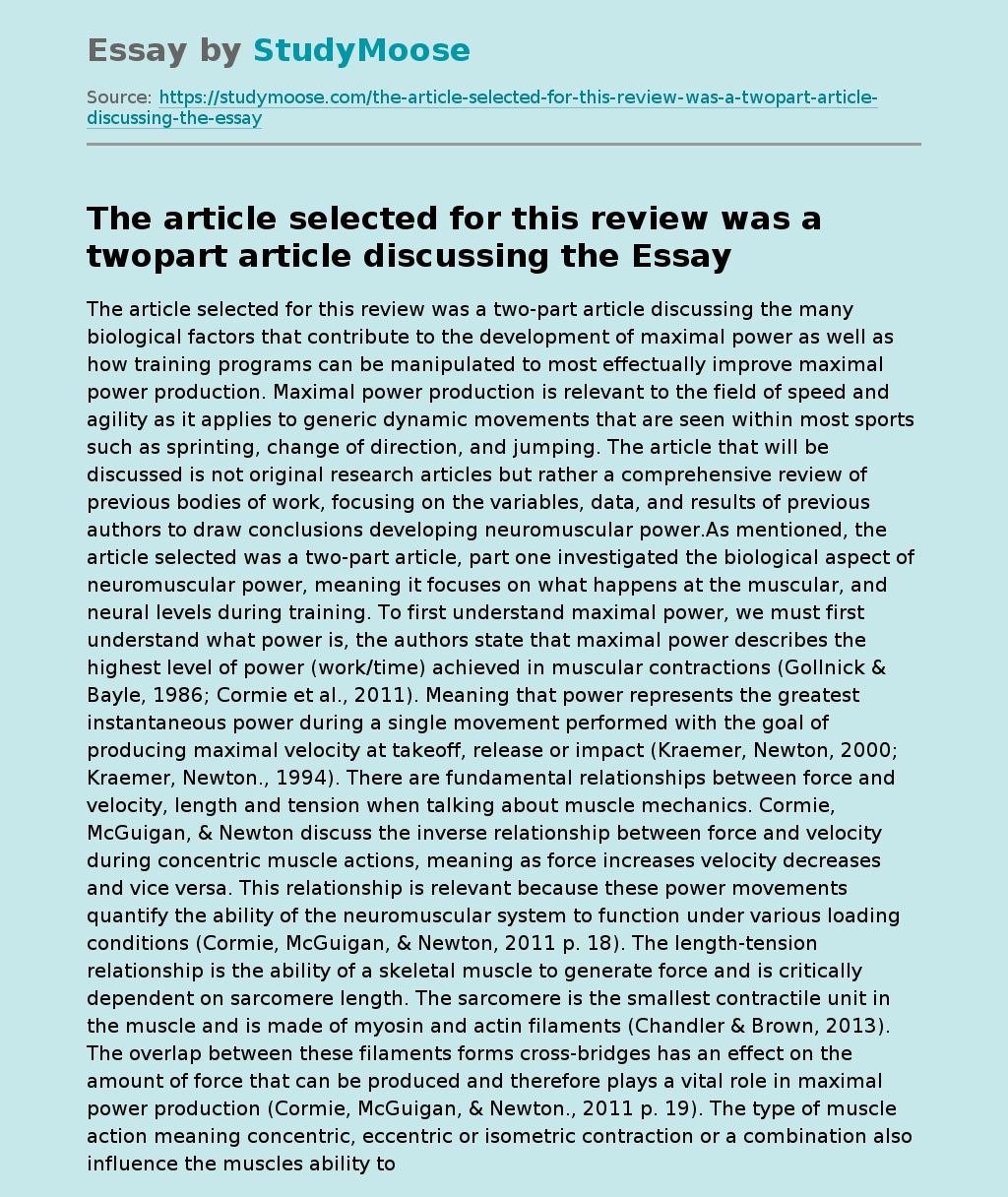