On the Sidewalk Bleeding: Newspaper Article

Last night at approximately 11:30 pm, Andy Anderson had become the latest victim of gang violence in the borough of Queens.

Andy was stabbed when he darted through a back alley on his way to buy a package of cigarettes at Alfredo’s on the next block. At that exact time, he was ambushed and later stabbed by a member of the GUARDIANS. A rival gang of the Royals. The ROYALS being that of which Andy was a part of. According to police officers that arrived on the scene about 45 minutes after the ambush occurred.

Don't use plagiarized sources. Get your custom essay on
“ On the Sidewalk Bleeding: Newspaper Article ”
Get custom paper
NEW! smart matching with writer

“Andy Anderson was wearing a bright, purple, silk jacket with The ROYALS stitched across the back of the jacket and Andy delicately stitched in black lettering over the heart.” Police also knew that when they saw ROYALS on his jacket that this wasn ‘t a random act of violence, and that this was a planned attack. This attack shows the extreme dangers of Gang violence in the borough of Queens.”

When police found Andy “On The Sidewalk Bleeding”, they had known that he had already died. This was because of three reasons: the location of the stab wound, the location of the wound, and how long it tom for EMS personnel to arrive on the scene. Police were also able to find him on the sidewalk with his girlfriend Laura who had this to say: “When I didn’t see Andy for a long period of time, I knew something wasn’t right and by the time I left the school and got to him it was too late… he was dead.

Police officers have just commenced their investigation and an autopsy will be conducted in the coming days to find out the time of death. Police would like anyone with any kind of information to contact 69 Division or to leave an anonymous tip for Crime Stoppers.

On the Sidewalk Bleeding: Newspaper Article. (2017, Jan 10). Retrieved from https://studymoose.com/on-the-sidewalk-bleeding-newspaper-article-essay 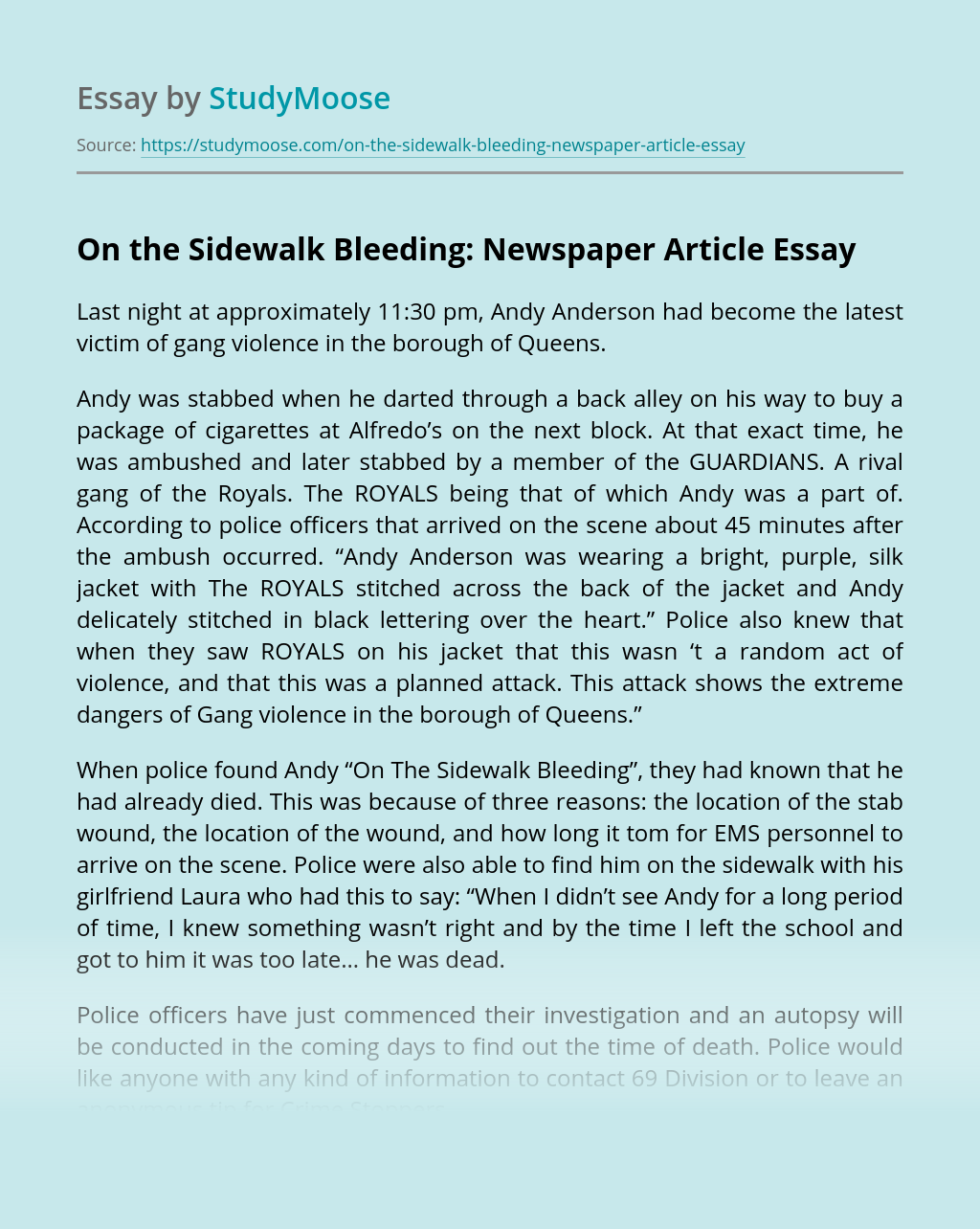