Macbeth as a fallen hero

Evil. Immoral. Good. These are words which with we use to define people, define their actions, their purpose and inevitably decide how we react to them. As we view Shakespeare’s tragedy Macbeth, the principal character Macbeth, is witnessed as a hero, an extraordinary soldier, someone who is honourable, valorous and someone who we might define and picture as good. As the nature of this portrayal changes, relative to his ambition, one sees the notion that corrupting power is the result.

Don't use plagiarized sources. Get your custom essay on
“ Macbeth as a fallen hero ”
Get custom paper
NEW! smart matching with writer

A result that leads to a pinnacle, a point in which one’s achievements are no longer satisfying, pleasing, and yet one is still forced to maintain that position, carry that burden simply because one cannot go back down, just as one cannot change one’s past. And it is at this point that one sympathizes with the character, the person who made his choices, who we considered evil, immoral, despicable, yet we still see as someone moral and most importantly good, who just took the incorrect path and cannot go back.

Macbeth was an honourable man, a man who felt emotions such as love. Love for his wife, his kingdom and truly his king whom he was considered “his kinsman”, “his subject”. A man who was recognized as “brave Macbeth”, who’s skills and courage were compared to “Bellona’s bridegroom”, the god of war, to show that Macbeth himself surpassed any man, and was only equal to that of a god himself. But, not only were his fighting skills impeccable, but his will to sacrifice, as he is compared to “another Golgotha”.

That in fact he is not only fighting for himself, but fighting for his people, his country and the king; the king who sat in “his great office”. For it was only when Macbeth’s honesty, ambition, self-doubt and honour were kept in tact with his loyalty to the “the crown” was he truly a man. However, the bonds that kept Macbeth’s dormant ambition locked were released and fueled, through his subconscious thought, but consciously by the manipulation of his own wife and most prominently by the prophecies of the three witches.

This is first seen when the witches prophecy proves to be true. That he had become “thane of Cawdor”, and that if such is true, even possible, then king is also within reach. Two paths lay in front of Macbeth, two choices, and inevitably Macbeth chose the path of power and immorality. However, without a doubt the full of this ambition and decisions was through his own wife, Lady Macbeth. Through her use of words and manipulation on Macbeth, she proved he was “a coward”. “Like” a “poor cat i’th’adage” . That in fact he wants power, but is not willing to do anything about it.

Not only that but that she would of “pluck’d my nipple from his boneless gums/And dash’d the brains out, had I so sworn/As you have done to this (1. VII. 57-58) That she would of killed her own baby, a mother’s greatest treasure, for this power, this opportunity, yet Macbeth would not shed a little blood on his hand. Through this manipulative language, we see that Macbeth is inevitably trapped, between his bonds of loyalty and his wife’s demands, but not only that, but the witches prophecies and their words harness him one way more than the other.

That ultimately going along with his wife still holds promise, promise of safety and power, and also because of the witches prophecies, moreover, the fact that one of them has already come true. However, the reality is that Macbeth chooses his ambition over his loyalty to the king who ‘his virtue’, ‘will plead like angels’ and how ‘tears shall drown the wind’, that the world would feel his senseless actions. His senseless actions at killing someone who respected, and prized Macbeth. Macbeth knows what is just, but ironically doesn’t possess the fighting skills that he was proclaimed to have on the battlefield.

The fighting skills of a ‘god’. For when Macbeth kills Duncan one sees the truth, Macbeth is not an evil person but a weak person, someone who is coward without a sword and that not even ‘Neptune’s oceans’ will clean the evil deeds that have stained him. That he was not strong enough to stand up to the forceful drive and temptation of his ambition by his wife, and the prophecies. And that he will feel the remorse, the guilt, and regret forever. He is trapped along a fate that he can no longer change. A fate in which he chose, yet didn’t choose.

For he had begun the ascension up the pinnacle, the beginning of a journey, in which he would be forced to lie or murder to continue up, to save himself from an inescapable end in which it could only lead him to a point, a point of no return. That the bond of loyalty to the king was broken already, just as he cancelled and tore “to pieces that great bond” which kept him pale. (III. ii. 49-50) That he ended all religious attachments, his belief of Christianity, for power, power which he could not control, by killing his own king, ‘his host’.

Macbeth was a mortal, someone who knew his mistake, that his hidden ambition had been released. That if he “Had… but died an hour before this chance,/” he would of “lived a blessed time”(II. iii 87-88). That he was condemned, doomed when he struck that fatal blow on King Duncan. It was then that there was “Nothing serious in mortality” to him anymore. He was set on a path which led only one way (II. iii. 88). He had given away the gift of happiness, for which he could have had. The path, the fate Macbeth chose for himself.

He was merely playing life as a toy, something which was not real. Something for which he could damage, because it no longer mattered anymore. As quoted in Act 5, “I’ll make assurance double sure/And take a bond of fate thou shalt not live (IV. 1. 82-83) Macbeth understood the prophecies, that there was no way for Macduff to kill, but he still chose to kill him. To murder him without intent, without motive, but for the mere carelessness of life. And not only that, but also “His wife, his babes, and all unfortunate souls/That traced him in his line” (IV. 11. 51-152) The no longer care for life, care for anything led Macbeth to become what he is. That he has even forgotten “the taste of fears” (V. 5. 9) and that is filled himself with so much regret, so much remorse, that he understands his mistakes clearly, but is past the point of no return, from when he thrust that blade down, that not even his cries of his own wife’s death can affect him anymore.

He knows, he comprehends, as he speaks that he has “fallen into the sere, the yellow leaf” (V. 111. 23) and that he should be accompanied by “honour, love, obedience, troops of friends. (V. 111. 25) But, in fact holds none of these, things that he did once have, such as of emotions of love, feelings towards his wife, feelings that no longer exist, that he can no longer feel, even at her death. Yet, he still continues to fight, to keep doing what is wrong because he has reached the pinnacle, the idea that he has “liv’d long enough” (V. 3. 22) and has sustained that corrupted power for so long that in truth he knows that there is no turning back and that he will not “play the Roman fool and die” (V. . 1) and ultimately will end the way he began, fighting on the battlefield, with the slight hope of being saved by his faith in the witches prophecies which he so much believed in and trusted, which deceived him, which hanged his proposed ‘blessed life’. For it inescapably filled his ‘vessel’ with too much guilt, guilt that cannot be removed, not even by ‘Neptune’s oceans’ a ‘god’, and that only by ‘killing’ more will he become utterly submersed in evil and forget about the mistakes he made.

The mistakes of condemning himself to evil, immoral deeds that a man like him should of not done. For he had cancelled and torn “to pieces that great bond” which “kept him pale” (3. III. 49-50). And as foreseen, in the end we see the fall of the once valorous Macbeth. A man who paid the consequences for the one single choice he made. That the root cause, his ambition, his will to believe in falseness lies, and his cowardness to negate it led to his change in his morals, into unrest and immorality.

And that all of it led him to a point, a peak where he spent all the effort to attain something that he did not deserve, just as a “a giant’s robe upon a dwarfish thief”, and that eventually one’s strength to uphold that great weight cannot last, even if you are a god. (V. II. 21-22) And it is here that we sympathize with Macbeth, a man who killed people, murdered them with or without intent, yet was led down this idea, this path simply by one wrong choice which led to another just as a butterfly flies from one flower to another.

He was a villain, he was immoral, but that in itself is mankind’s faults, which we all understand, that we all make mistakes, that we are led down paths in which we chose not too, and that Macbeth just went down a path which had no end. For it was this prominent downfall which without a doubt showed us that if someone recognized as a hero, a god can be deduced to such evil deeds, we can only sympathize with him, see ourselves as more vunerable, easier to manipulate, and just like himself.

Macbeth as a fallen hero. (2020, Jun 02). Retrieved from https://studymoose.com/macbeth-fallen-hero-new-essay 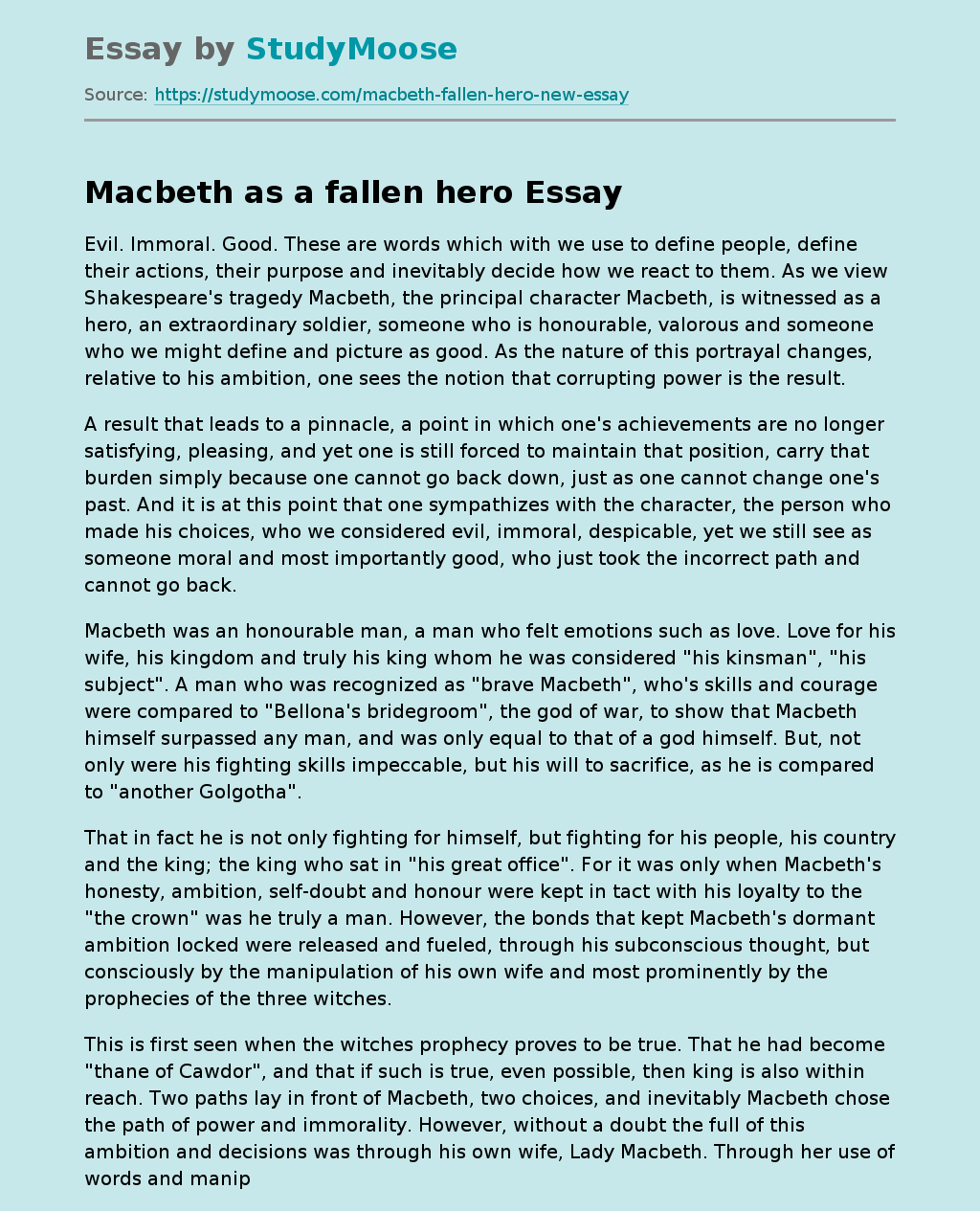