Love what you do and do what you love

If you love what you do and do what you love; every man would find his life a joyful encounter and thus would agree to what Helen Hayes says, ‘if we rest, we rust’. Everyone has an ‘Eros’, a life-wish as they say, which fuels us to unveil the magnificent canvas of our dreams. If Mr. Ram Chandran, a top notch management adviser, whose daily planner inflects that he has appointment even when he is airborne with the person seated next to him, did even think that he needed rest, he would have to wait for a five good years! As his calendar entries are occupied till then.

Don't use plagiarized sources. Get your custom essay on
“ Love what you do and do what you love ”
Get custom paper
NEW! smart matching with writer

When asked for his stress and mental strength levels due to his busy schedule all that he advised to the young generation was that if you don’t have time to get bored, you pretty much don’t been need rest ! If we have a planned schedule for today and tomorrow, why should there ever be a need where in our minds say ‘Enough for the day, I am loosing it all, I think i need rest’.

I wish to see myself teaching at one of the finest universities across the globe, and in order that i achieve what i have visualized, an equal amount of hard work and perseverance is required. If you are an ‘employee’ you take leaves to take ‘rest’, but when you are working for none but yourself you are the ‘employer’ and employees and self- believers believe in one common inner will which says, ‘if it takes madness to reach, where you want , be mad!’ Our mind is considered to be one of the most dynamic substances existing today! To let it rest would be to subject it to the vulnerabilities, which not only will affect our professional lives, but also our inner strengths and abilities! Things have their value, when they are best put to use! Things have been their value, when they are constantly being demanded for! And it holds true even for one body.

Then be it for the attainment of luxurious professional lives or satisfying one’s soul, a constant up gradation, an undeniable change, a relentless dynamism is critical I entirely agree with this statement: “If you rest, you rust.” In fact, I had seen my friend who had failed to the test by his sluggish. Also, I had been seen two of South Korea Presidents: Mr. Noh and Mr Park. My friend was top 10 student at Korean High School. He and I had competed each other in Academics since I was top 10 as well. He always, however, had surpassed me by two or three place until he indulge himself in indolence. I saw depravity of my friend; he was too confident by himself and did not study as hard as before he did. He thought he can still be top 10 without study hard. He always played game, met girlfriend, and smoked even during the final period.

I felt as if a cloud settled over him. After final, a teacher gave the students their transcript. He failed. I got top 10. Another example, there were two South Korea Presidents who had succeed and failed. Mr. Park, at first, who was the President in 1970 was army in South Korea, and he got power by a military coup. He, at that time, was condemned by nation. However, Mr. Park did so many good things during his period. Especially, his project, known as “New Region Project”, was praised by all nation. This project had brought up South Korea’s economy. According to “Jo Sun Il Bo”, which is the famous newspaper in South Korea at that time, South Korea’s GDP, Gross Donation Products, was risen from 7,000 dollars to 9600 dollars.

All these things could have happened by his assiduous work. In contrast, Mr. Noh who was President in 2002 to 2007 was took criticism by his indolence. Simply, he did not do anything during his period. He even went to movie theater to watch movie with his wife. The most worst thing is that he said he want to abdicate and be a farmer without any burden although he actually did nothing. For these reasons, the nation confidence degree of Mr. Noh had been falling by 22% in 2007. Once people be indolence, then they do not want to do anything, and this sloth make them to be rust. My friend and Mr. Noh had corrupted by their idleness. If you rest, you must be rust..

Love what you do and do what you love. (2016, Oct 11). Retrieved from https://studymoose.com/love-what-you-do-and-do-what-you-love-essay 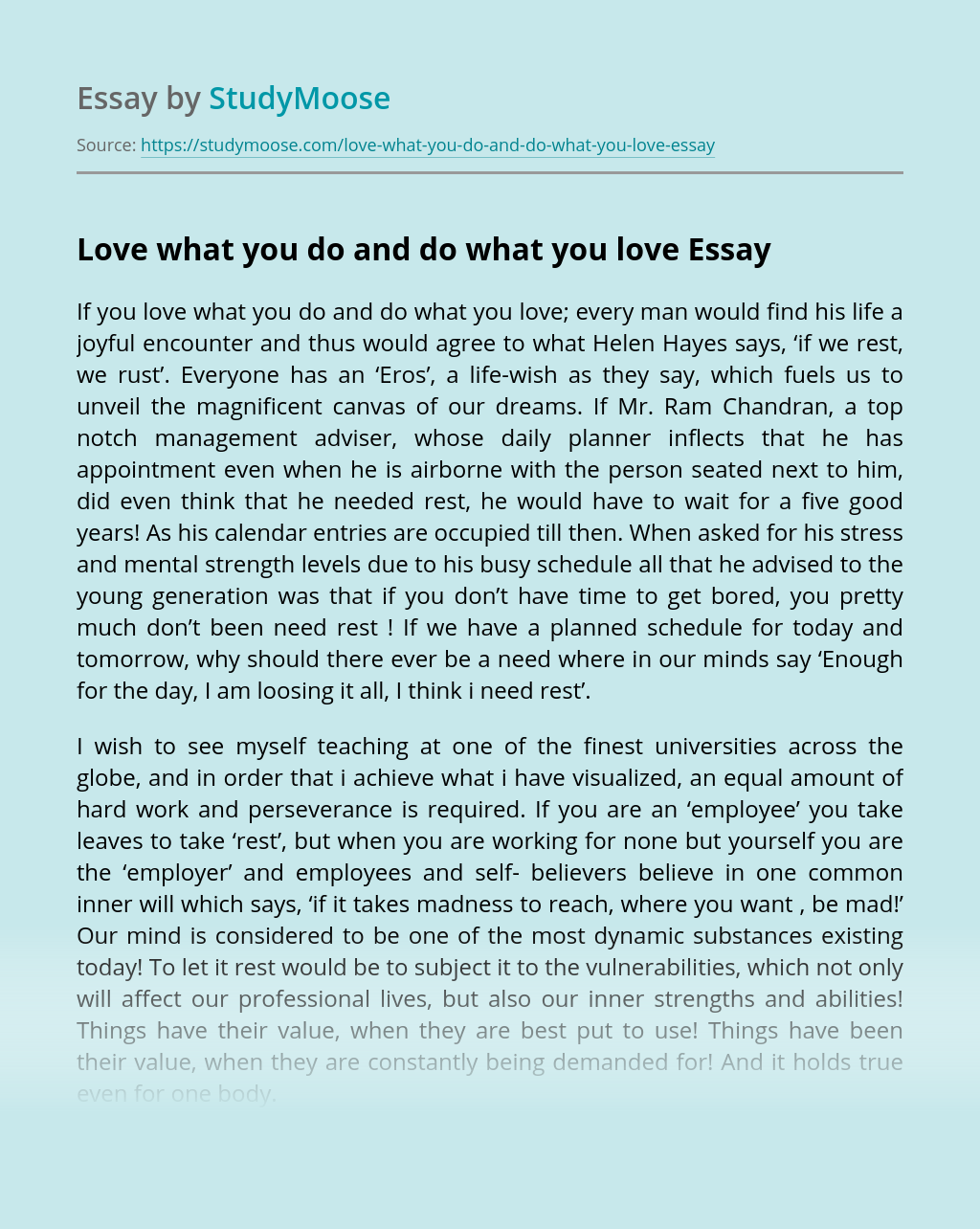