Love Theme in Pride and Prejudice

Love is the conquering theme in Pride and Prejudice. The love story between Elizabeth Bennet and Mr. Fitzwilliam Darcy gives rise to the theme that love can conquer over pride, prejudice, and even social hierarchies. Jane Austen uses the novel in order to propose that true love is precious and can conquer all things. Initially, Austen develops the theme by having love conquer Mr. Darcy’s pride. Mr. Darcy is at first cold and uninterested in the poor, socially inferior Ms.

Don't use plagiarized sources.
Get Your Custom Essay on Love Theme in Pride and Prejudice Just from $13,9/Page

Bennet. He says, “She is tolerable, but not handsome enough to tempt me” (Austen 31). He scorns the ball at Meryton, and says it’s a waste of his time (Austen 32). Mr. Darcy’s affections though begin to change after Elizabeth comes to Netherfield Park in order to take care of her sister, Jane.

The narrator states at this time, “He really believed, that were it not for the inferiority of her connections, he should be in some danger” (Austen 159). Mr. Darcy, surprisingly though, extends an offer of marriage to Elizabeth; He just proposes with the constant mention of how he is of higher standing, in so many ways, and how that this match is against his better judgment. Even while humbling himself to the point of asking a middle class woman to marry him, pride still exudes from his mouth. Ms. Bennet, needless to say, declines. This spurning of his proposal humbles him to the point where he once again asks for her hand, and this time humbly.

Austen shows love and affection subduing the proud Mr. Darcy humbling him to the point where he would happily marry a middle class girl of greatly inferior social standing, reputation, and wealth. Secondly, Jane Austen shows love conquering over Elizabeth’s prejudice. For the entire first half of the book, Elizabeth loathes Darcy and his social class. She finds him and his class snobbish, pretentious, and prideful. Elizabeth unrightfully believes rumors about him coming from the untruthful Wickham, and does not let Darcy defend himself against them. Elizabeth’s prejudice starts to subside though after Darcy’s marriage proposal and she gradually starts to trust and admire him, especially after Mr. Darcy’s servant Mrs. Reynolds’s speaks so kindly of him (Austen 755).

Elizabeth Bennet’s love for Darcy grew greatly the more knowledge she gained about him, which coincidentally destroyed Elizabeth’s prejudice. Lastly, Elizabeth and Darcy break down huge social barriers in their marriage. This is seen in no greater of a way than in the confrontation between Elizabeth and Lady Catherine de Bourgh. The old lady cannot stand the fact that her well-groomed nephew wants to marry a poor pauper girl. She warns Elizabeth that if she were to marry Darcy that he would soon become the “contempt of the world” (Austen 1108).

And not only does Mr. Darcy’s class object to the pairing, but Elizabeth’s own mother and father do not think it is possible that their daughter to marry that high into the social order (Austen 1173). The only reason this couple would have gotten together is love, and Austen is showing that love can overcome societal barriers. In conclusion, Jane Austen used the characters of Mr. Darcy and Elizabeth Bennet, to show that true love outshines social acceptability, and overcomes pride and prejudice.

Love Theme in Pride and Prejudice. (2016, Apr 23). Retrieved from https://studymoose.com/love-theme-in-pride-and-prejudice-essay 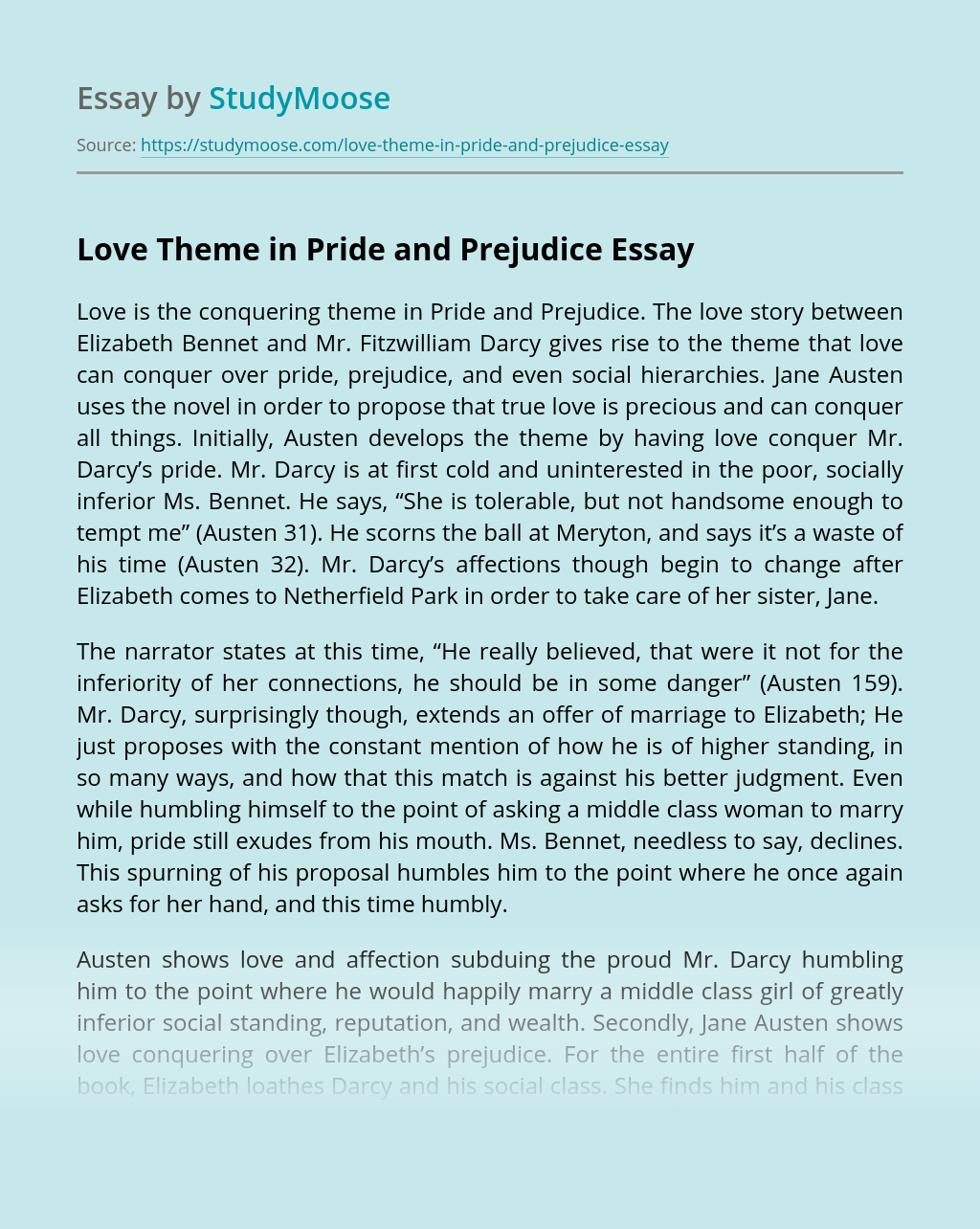 Teacher evaluation is documenting the quality of teacher’s performance; then its focus shifts to helping teachers improve their performance. The fact that the Baguio Seventh Day Adventist School is an educational institution, it evaluate its teacher performance. According to the principal of the school, evaluation of teachers by the students started in 2002. Then they...

View sample
Get Essay
Export of The Educated

Our country is full of competition. Year after year, the results of our exams improve. We see students achieve marks which were earlier deemed impossible. The irony is, that with all this intellect that can be found in every corner of our country, we are still not considered a developed nation. The cause for this...

Comedy of Manners, a witty, cerebral form of dramatic comedy depicts and often satirizes the manners and affectations of a contemporary society. A Comedy of Manners is concerned with social usage and the question of whether or not characters meet certain social standards. Often the governing social standard is morally trivial but exacting. The plot...

Pyramids The study of ancient history is made possible by the remains of great civilizations that are now long gone. Archaeologists, anthropologists, and other disciplines work hand in hand to understand the past, knowing very well that it is the key to understanding the present. Thus, the discovery of paintings, artifacts, ruins and other objects...