It was a regular day for my family. My parents had gone to work; my brother and I had walked to school. The excitement inside me was about to burst. That day was my first year to attend the Benton County Fair. I was six years old at the time. There were over a few acres filled with different rides, activities, games, and all the junk food someone could ever imagine.

We entered the gate having our admission paid; the journey began as we imagined what would be the best night ever.

Don't use plagiarized sources. Get your custom essay on
“ Lost and Found ”
Get custom paper
NEW! smart matching with writer

We hit up the ticket booth to buy tickets, to adventure through all the kinds of rides. My mom had decided to buy enough for my brother and me to have a sufficient taste of the fair. As we embarked on the first ride, my brother and I begged our parents to join us and came the expected response of, “You guys go and enjoy, and we will watch you from the side.

” We expected them to say that for they were exhausted after a long week of work. We passed the remark and handed the ride attendant our admission tickets for the ride. We took seats right by each other, not daring to think about another kid riding by us. The ride took off, and the screaming began, even if this had been the 15mph little caterpillar “roller coaster.”

My daringness from the beginning turned right away into fear and motion sickness. As I reached in the air just like all the other kids to try to blend in, I tried to laugh and scream in a sense of enjoyment and pretend to be excited, but really this was the biggest event of terror in my life.

Listening to noise of the wheels of the little cart against the metal rails was the most frightening. As I looked into my brother’s face, there were my emotions mirrored. The ride swayed and carried to an end, and we met my parents at the rendezvous point of the exit gate. Abdelsayed 2

They asked, “How was the ride…?” and came out the response of, “It was fun” trying to hide our pathetic, scared expressions. My brother and I shortly forgot the experience and gazed off to see less-motion-involving rides. As our tickets began to fade, we explored the park to see the cool things there. We came to see the huge slide you ride down with a carpet, and saw the kids laughing. I showed no interest, being tired, and thought to myself, “I can do that next year.” We simply admired the sliders. My parents had called my name and said it was time to go. As I had been slowly hypnotized by the amusement, I was separated from the rest of my family. I tried to fight the legs of grown-ups, to follow my sense of instinct of where they were. But no try connected me back with them. The fair that year had a lot of attendees and was very busy. I, being six years old at the time, was small in size. So everything that was in my sight of vision was the tall legs of grown-ups.

I hit the knees of a tall man dressed in brown as a sheriff. He asked me where my parents were. I confessed to him that I was lost. He asked me, “What do your parents look like?” As I began to explain what my dad had been wearing that day, he picked me upon his shoulders to give me a better look. We went through people and around corners for about what seemed to be hours. And when I was about to give up hope, I spotted and recognized my dad’s semi-bald head. I pointed in relief and he guided the way for both us.

I was reunited with my family at last. My mom’s sigh of relief was nice to see. My parents thanked the officer as he greeted them. We ended our trip of the fair, for we were too tense to enjoy the rest. And as our journey home consisted of repeated criticism for not listening to my parents, I accepted it knowing that I had done wrong. Shortly after, I drifted asleep to go about the next day like the one before never happened. 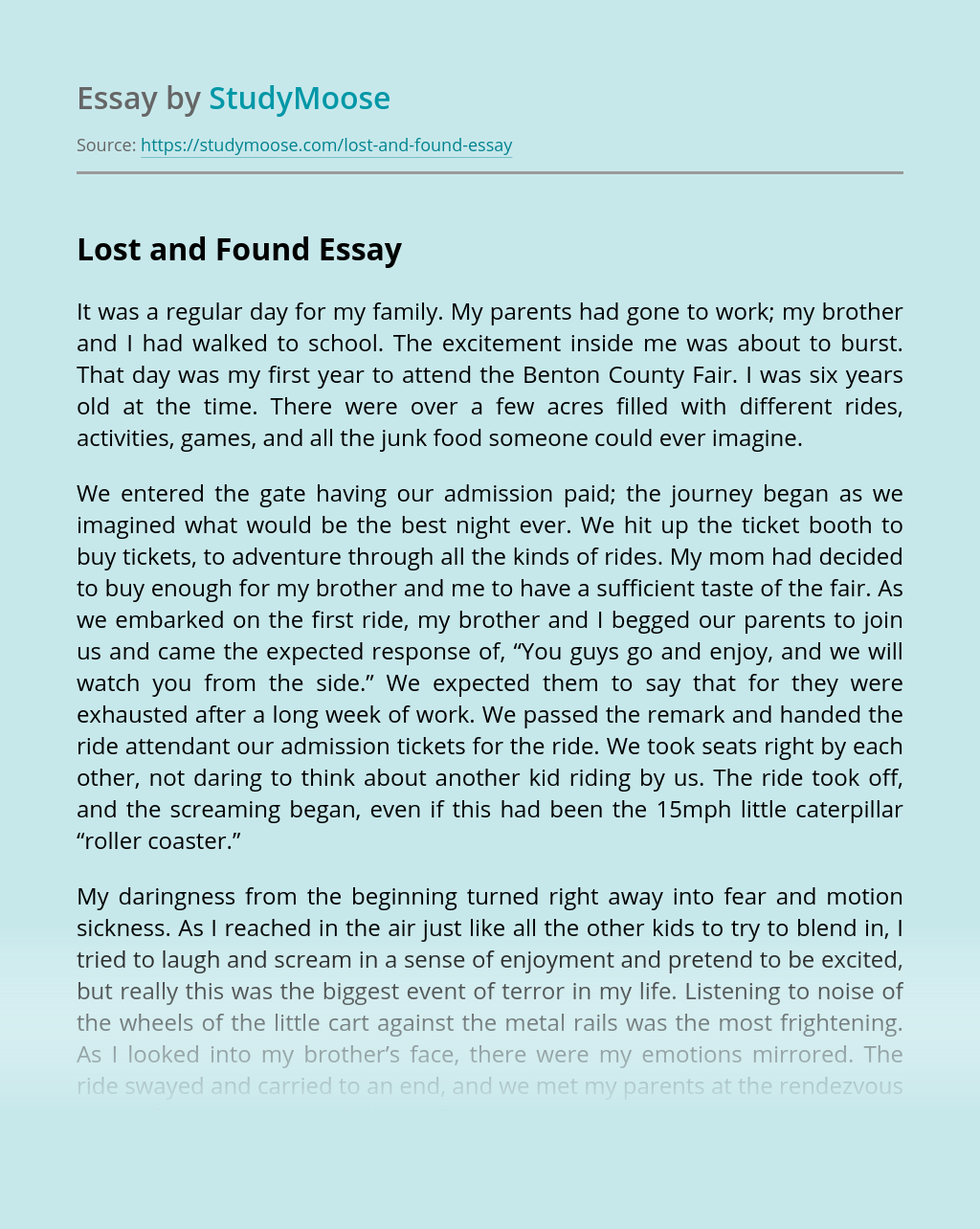