Loss of Innocence in Toni Cade Bambara's "The Lesson"

Democracy implies equal chance for all. Such is not the case for the black children of the ghetto, as we learn through reading Toni Cade Bambara’s “The Lesson”. During the course of the story the narrator, Sylvia, develops as a character due to the trip that Miss Moore takes her on. Miss Moore, an educated black woman who comes to the ghetto to give back to the children, takes children from the ghetto of New York to F. A. O Shwarz which is an extremely glamorous toy store.

Don't use plagiarized sources. Get your custom essay on
“ Loss of Innocence in Toni Cade Bambara’s “The Lesson” ”
Get custom paper
NEW! smart matching with writer

She does this to make the children aware of their social and economical situations by forcing them to face the difference between them and the people who would purchase toys from such a store that would sell a toy sail boat for over a thousand dollars. The theme of this story is very similar to the lesson Miss Moore is trying to teach the children. It is that through the loss of innocence and naivete that poor black children can have a chance to stand up and fight for their piece of the pie.

Proficient in: The Lesson

In “The Lesson” all the children come from poor families. They live in apartment buildings where drunkards who reek of urine live in the hallways that reek of urine from the drunks who pee on the walls; they live in what Miss Moore would call the “slums. ” The children’s families, however, exhibit somewhat of a varying degree of monetary security. For example, Flyboy claims he doesn’t even have a home whilst Mercedes has a desk at home with a box of stationary on it, gifts from her godmother.

Moore is the educated women that moves into the neighborhood. She is opposite of everyone else who lives in the neighborhood. Sylvia says, “And she was black as hell cept for her feet, which were fish white and spooky”(Bambara 116). Bambara uses this quote to symbolize how Ms. Moore is black, and that she is the children’s connection to the white community. This connection is realized through the outing to F. A. O. Shwarz through the realization that white people do not know the value of a dollar.

The children, however, surely understand the value of money, and they easily comprehend that the amount of money charged for the toys at F. A. O. Shwarz is astronomical. They compare the handcrafted fiberglass sailboat, which costs $1,195, to the ones they make from a kit, which cost about 50 cents. Sylvia, astonished at the price of the sailboat thinks “That much money should last forever,”(Bambara 119) which opens her eyes with the loss of her innocence and starts becoming infuriated. “White folks crazy”(Bambara 121) mumbled Rosie Giraffe.

“I think,” Sugar interrupts Sylvia because she is infuriated with the progress of the day, “that this is not a democracy if you ask me. Equal chance to pursue happiness means an equal crack at the dough, don’t it? “(Bambara 121) At the beginning of the story Miss Moore brought them to F. A. O. Shwarz in cabs. At the end she brought them back on the train as though including the transportation into her lesson by using cabs and F. A. O. Shwarz she gave them a view of what could be and by bringing them back through the train she brought them back to their reality.

All of this in an attempt to give the children a reason to fight through protest or other means for equality. Sylvia, despite all of her anger she was the only child to truly be affected by the lesson. Sugar may have understood it but through her carefree composure after being dismissed by Miss Moore, the reader learns that she is not truly affected. Because of Sylvia’s loss of innocence through this experience she has had her eyes opened in a blaze of infuriation. ” I’m going to the west end and then over to the Drive to think this day through.

“(Bambara 121) Her life will forever be affected by that day as it was the day where she lost her innocence. Miss Moore sought to give all her ‘students’ this very same reaction. A contributing-factor of her loss of innocence is, her hatred for those who are out of place. She often laughs at the Junk Man who fancies himself a businessperson and Miss Moore who spoke properly wore no make up and had a “nappy” head. She absolutely hated the drunkards who would pee on the wall and “stink up the place”. When at F. A. O.

Shwarz she felt as out of place as the drunkards she hated, the Junk Man and Miss Moore who she would laugh at. This was the main reason why she began becoming infuriated which built up to her losing her innocence and her eye opening experience. One’s loss of innocence is not easy to overcome such is described in “The Lesson”. However it is essential otherwise the change for equality through protest that Miss Moore is constantly encouraging through her lesson would be null. “But ain’t nobody gonna beat me at nuthin.

“(Bambara121) is the last sentence in the story and it is important because Sylvia’s determination is stronger than ever before and her losing her innocence has put her on a defined track to a determined life. Bambara is demonstrating how loss of innocence is not a horribly unscrupulous event but a life changing one that could prove to be marvelously beneficial for she who has lost it. “The Lesson” is a clever story of necessity to lose one’s innocence to better themselves for equality and change in America.

Loss of Innocence in Toni Cade Bambara's "The Lesson". (2016, Sep 07). Retrieved from http://studymoose.com/loss-of-innocence-in-toni-cade-bambaras-the-lesson-essay 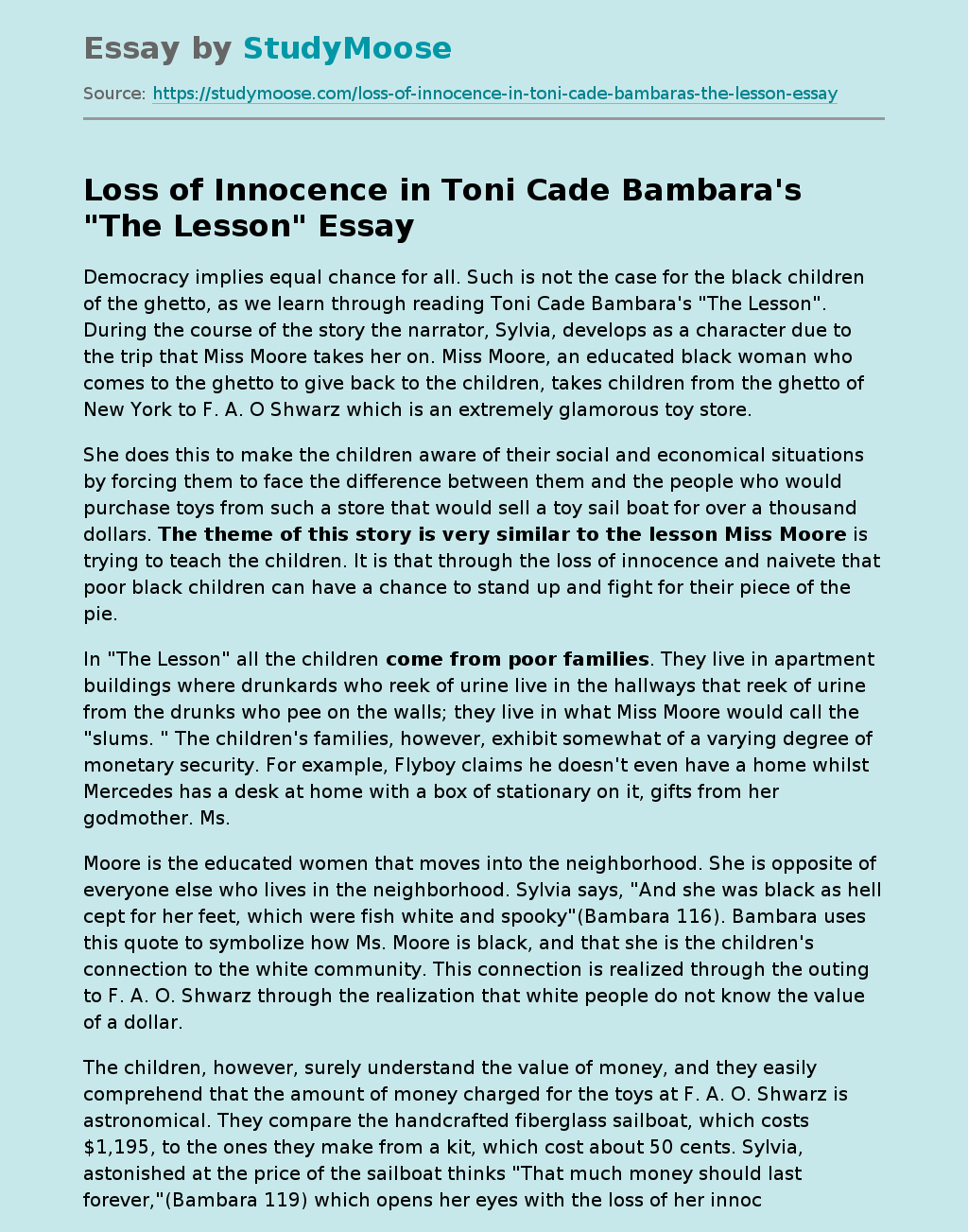