Analysis of "The Lesson" by Toni Cade Bambara

Toni Cade Bambara’s “The Lesson” revolves around a young black girl’s struggle to come to terms with the role that economic injustice, and the larger social injustice that it constitutes, plays in her life. Sylvia, the story’s protagonist, initially is reluctant to acknowledge that she is a victim of poverty. Far from being oblivious of the disparity between the rich and the poor, however, one might say that on some subconscious level, she is in fact aware of the inequity that permeates society and which contributes to her inexorably disadvantaged economic situation.

Don't use plagiarized sources. Get your custom essay on
“ Analysis of “The Lesson” by Toni Cade Bambara ”
Get custom paper
NEW! smart matching with writer

That she relates poverty to shame—”But I feel funny, shame. But what I got to be shamed about? Got as much right to go in as anybody” (Bambara 604)—offers an indication as to why she is so hard-pressed to concede her substandard socioeconomic standing in the larger scheme of things. Sylvia is forced to finally address the true state of her place in society, however, when she observes firsthand the stark contrast between the rich and the poor at a fancy toy store in Manhattan.

Initially furious about the blinding disparity, her emotionally charged reaction ultimately culminates in her acceptance of the real state of things, and this acceptance in turn cultivates her resolve to take action against the socioeconomic inequality that verily afflicts her, ensuring that “ain’t nobody gonna beat me at nuthin” (606). The Lesson” posits that far from being insurmountable, economic and social injustice can be risen above, but it is necessary that we first acknowledge the role that it plays in our lives, and then determine to take action against it; indifference, and the inaction that it breeds, can only serve to perpetuate such injustices.

Sylvia’s languid regard for Miss Moore, whom she refers to as “this nappy-head bitch and her goddamn college degree” (601), is a reflection of her initial disregard for the role that social injustice plays in her life.

Miss Moore, with her “proper speech” (601) and desire to “take responsibility for the young ones’ education” (601), is a foil to Sylvia: educated, discerning, analytical. Her informed and realistic perception of the society in which they live qualifies her as an embodiment of truth within the story, and Sylvia’s rejection of her is thus symbolic of her overarching rejection of the truth. More than just refusing to acknowledge the verity of her poverty—”And then she gets to the part about we all poor and live in the slums, which I don’t feature” (601)—Syvlia even subconsciously runs away from it. Don’t nobody want to go for my plan,” Sylvia says, “which is to jump out at the next light and run off to the first bar-b-que we can find” (601). Her compulsion to stray from Miss Moore suggests that on some subliminal level, she seeks to avoid confronting the truth that the lesson conveys about her indigent state. Upon arriving at the toy store, Sylvia notes: “‘This is the place,’ Miss Moore say, presenting it to us in the voice she uses at the museum. ‘Let’s look in the windows before we go in’” (602).

That Miss Moore introduces the children to the store in her “museum” voice is indicative of her desire for the children to thoroughly analyze their new environment and synthesize what it might suggest about social stratification; Miss Moore means to show them that, like a historically significant painting in a museum, the society in which they live is worth studying intently. Although the explicit differences between the ghetto and Manhattan are immediately apparent, Sylvia initially fails to make the implicit connections between these external differences and larger social inequity.

She boggles at the concept of a woman in a fur coat—”Then we check out that we on Fifth Avenue and everybody dressed up in stockings. One lady in a fur coat, hot as it is. White folks crazy” (602)—but fails to interpret what she sees in relation to the disparity between the rich and the poor. Instead, all she can do is point fingers and criticize. The children’s discovery of the fiberglass sailboat marks the story’s climax and signals the transition from rising to falling action.

The cost of the sailboat provokes an as yet unseen emotionally charged, one might say true reaction from Sylvia: “‘Unbelievable,’ I hear myself say and am really stunned” (603). More than just being stunned at the price of the sailboat, however, Sylvia is perhaps on some deeper level stunned at the emotions that have been roused within her. It is at this point in the story that her overriding indifference towards the roles that economic and social injustice play in her life begins to yield to a real emotional response to them. Although Sylvia has begun to respond to the disparity between the rich and the poor, she is still eluctant to fully accept it: “So me and Sugar turn the corner to where the entrance [to the toy store] is, but when we get there I kinda hang back. Not that I’m scared, what’s there to be afraid of, just a toy store” (604). The hesitation Sylvia encounters upon entering the store is a reflection of her desire to insulate herself from the feelings of inadequacy she is beginning to experience: she understands that if she enters the store, she will be forced to finally confront the actuality of the socioeconomic gap that separates her from the people that the store caters to.

The door to the toy store symbolically manifests this divide, as the toy store itself, with is exorbitantly priced items, is symbolic of the world of the wealthy. Sylvia’s struggle to get a hold of the door is indicative of her continuing struggle to accept absolutely her disadvantaged economic situation. Once inside the store, Sylvia can no longer ignore the blinding imparity between the rich and the poor. Her discovery of an overly priced toy clown prompts her to consider what could be bought for its price: “Thirty-five dollars could buy new bunk beds for Junior and Gretchen’s boy.

Thirty-five dollars and the whole household could go visit Granddaddy Nelson in the country. Thirty-five dollars would pay for the rent and the piano bill too” (605). Sylvia is forced to finally address the socioeconomic inequality that works against her while simultaneously conferring certain luxuries on the rich: “Who are these people that spend that much for performing clowns and $1000 for toy sailboats? What kinda work they do and how they live and how come we ain’t in on it? (605). In stark contrast with her earlier disregard for economic and social injustice, Sylvia is now incensed by it. Her anger is further incited when Sugar speaks on the implications of these newly perceived inequalities: “‘I think,’ say Sugar pushing me off her feet like she never done before, cause I whip her ass in a minute, ‘that this is not much of a democracy if you ask me.

Equal chance to pursue happiness means an equal crack at the dough, don’t it? […] I am disgusted with Sugar’s treachery” (605). In concretely addressing the existence of socioeconomic inequality and its effects on their own lives, Sugar cements its realness in Sylvia’s mind—she can no longer run from it. It is thus the truth in Sugar’s words that she is disgusted with, not Sugar herself. Sylvia’s powerful emotions ultimately culminate in her resolve to not just acknowledge the roles that economic and social injustice play in her life, but to understand these njustices and eventually rise above them: “We start down the block and she gets ahead with is O. K. by me cause I’m going to the West End and then over to the Drive to think this day through. She can run if she want to and even run faster. But ain’t nobody gonna beat me at nuthin” (606). That Sylvia does not run with Sugar is symbolic of her refusal to run from the truth any longer; she now understands that it is her responsibility to face her situation head-on so that she might one day overcome it.

Ironically enough, in the end it is the most cynical of the pack—the one whose idea it was to ditch Miss Moore—who extracts the most meaning from the day’s activities. In his analysis of “The Lesson,” Jerome Cartwright addresses the significance of Sylvia’s realization in relation to how it moves her to take action: “[Sylvia] is changed in a way that promises hope for her ability to respond effectively to the newly discovered reality she faces” (Cartwright 61).

However, he suggests that although Sylvia’s realization regarding “the unfairness of life and, as a black girl, her often low position in the scheme of things” (61) is central to the story, “the conflict between rich and poor and the economic injustice it reveals” (61) is not what drives it forward. For Cartwright, “the story is essentially about the value of lessons themselves, the value of learning and thinking. […] The children do not simply need to learn one lesson: they need an education” (61).

Cartwright’s generalization in this way belies the story’s true meaning. Although historical surveys of the collective economic status of African Americans point to a long-standing relegation of blacks to lower income levels, “current information points to a continuation of a long-term trend toward parity with national levels and absolutely higher levels of affluence than those experienced by most populations outside the United States” (Wikipedia 10).

Moreover, “since the mid to late 1990s, […] over 1. 7 million African Americans have gone off the poverty rolls, earnings by African American women have moved to within a few percentage points of white women’s, and unemployment among blacks in recent years has dropped below the 10 percent mark” (10). While these numbers are not enough to invalidate the existence of socioeconomic inequality, they affirm that in this country, social and economic injustice can be mitigated.

The “unprecedented access to higher education and employment” (11) that African Americans have been party to since the Civil Rights Movement speaks strongly to the opportunities for change that this country affords its citizens. However, the value of the struggle cannot be lost on us. We must recognize that such fundamental change does not manifest itself overnight: it is achievable only where a lasting commitment to it is available. Change is not beyond us. Action, however, is its necessary predecessor.

Analysis of "The Lesson" by Toni Cade Bambara. (2016, Oct 19). Retrieved from http://studymoose.com/analysis-of-the-lesson-by-toni-cade-bambara-essay 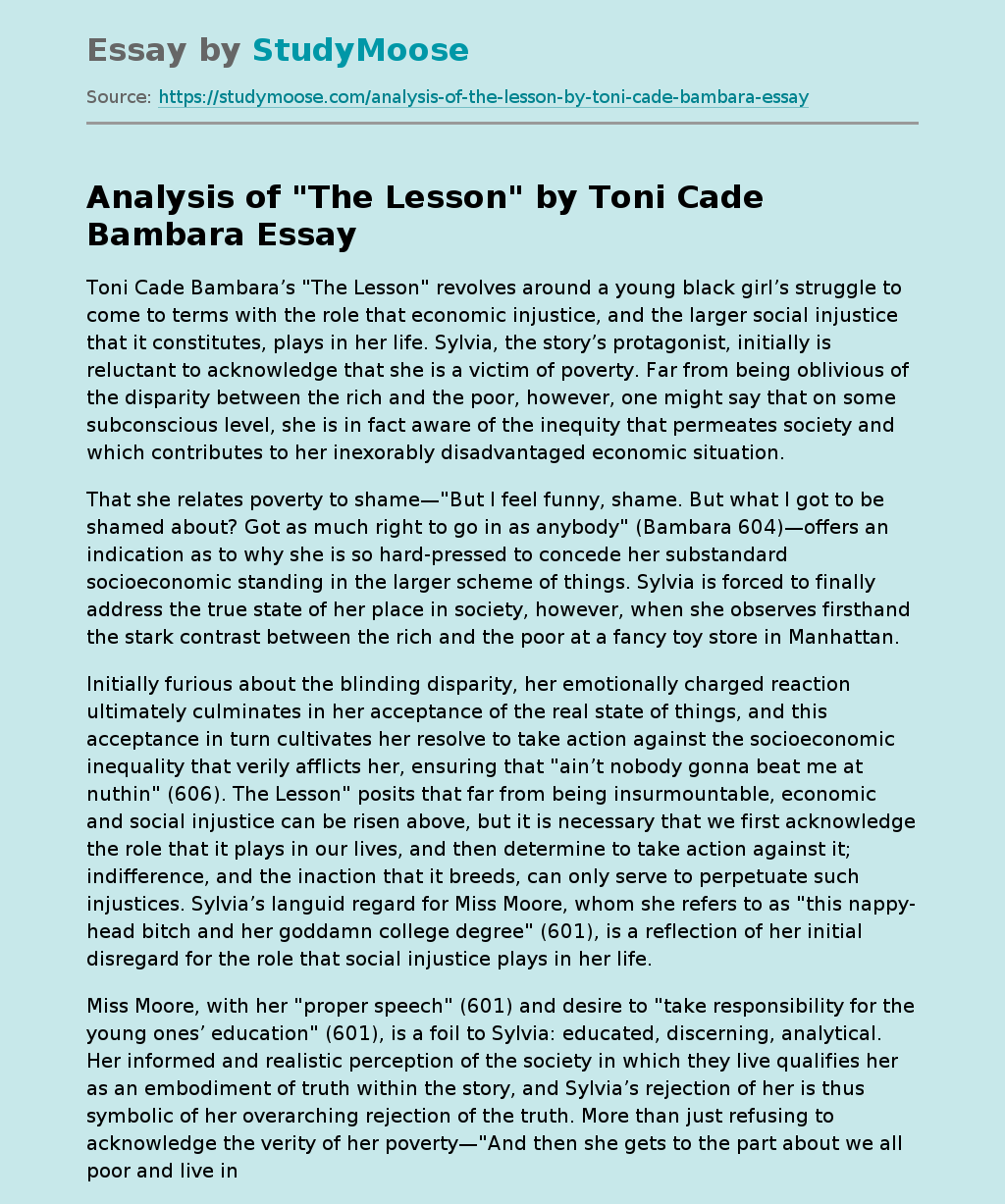