In the short story, “The Lesson,” Toni Bambara reveals the injustice in society in the United States through the eyes of young ghetto children. A field trip to an expensive toy store exposes the bitter truth of society; not everyone has an equal opportunity to make money. In the children’s view, everyone should have an equal standard of living. Toni Bambara effectively articulates the unfairness of economic inequality through the use of three short story elements: language, character, and theme.

Don't use plagiarized sources. Get your custom essay on
“ Short STory The Lesson by Toni Bambara ”
Get custom paper
NEW! smart matching with writer

The author chooses to use informal diction to closely relate the readers to the economic problems that children are facing. The children in the story speak non-standard English. Instead, they speak in AAVE, or African American Vernacular English; throughout the story the reader can easily find slang and other colloquial expressions, such as “sorry-ass… goddamn gas mask.” (pg.90) Although it may sound disturbing, this authentic voice adds realism and humor to the story. The narrator’s diction provides us with clues about the background of characters; her frequent usage of non-standard English indicates that Sylvia is not educated.

She uses a phrase, “nappy head bitch,” (pg.90) which both denotes and connotes.

The word “nappy head” denotes “small tight curls.” However, it has a negative connotation which is used in colloquial or derogatory reference to the hair of black people; it is a racist term against black people. Informal diction also narrows the gap between the reader and the text, thus emphasizing the economic injustice. If the story were written in formal diction, it would not have had the same effect; we would not realize the profound unfairness of society.

By selecting African American ghetto children as major characters, the author adds reality to the economic difficulties that they face, and highlights the unfairness of society. The children in the story live in the slums, and their parents do not look after them. Miss Moore takes responsibility for educating the children. She is an unwavering woman who is determined to teach the children about the unequal distribution of money and the problems that African Americans and poor people face. Miss Moore takes eight children on a fieldtrip to an expensive toy store, and challenges them to think about what they see.

Even though it may seem harsh to reveal the bitter truth to the young children, she has a clear reason for bringing the children to the toy store; she wants them to think about social injustice. She feels that the children should learn the lesson even though it might be painful. Miss Moore is a static character; she remains unchanged. Her ultimate goal is to educate the children so that they resist inequality and bring changes to the society, and this stays the same throughout the story. Miss Moore’s motivation enriches the meaning of the story.

All eight children are shocked to find out the unreasonable prices of the toys. However, regarding their behaviours and responses, the children are roughly divided into three main categories. One category includes Big Butt, Junebug, Q.T., Rosie, and Flyboy. They acknowledge the unreasonable prices of the toys. Each child shows his or her distinctive response to the expensive toys. For example, Big Butt shows his avarice as his nickname implies. When he sees the microscope, he says, “I’m going to buy that there,” (pg.91) without any knowledge of what a microscope is for and how much it costs. Q.T. is a quiet one. Without saying a word, he quietly stares “hard at the sailboat.” (pg. 93) These five characters are static and flat characters; they are barely developed, and embody only one or two character traits. They face the same challenges that Sylvia encounters, but they remain unchanged.

The second category includes Sylvia and Sugar. They recognize the economic injustice that the toys imply. Yet, these two children respond differently. At first they both scream in response to the fascinating toys, “This is mine, that’s mine, I gotta have that, that was made for me, I was born for that.” (pg. 91) However, after the group closely examines the toys, Sugar realizes what they represent, and remains quiet. At the end when Miss Moore asks the children what they think about the toy store, Sugar speaks up, “I think… that this is not much of a democracy… Equal chance to pursue happiness means an equal crack at the dough, don’t it?” (pg. 94) Sugar doubts if a country with the unequal distribution of money is a true democracy. It becomes obvious that Sugar is a dynamic character. At the beginning of the story, she was a sidekick; she was Sylvia’s closest friend, and she was “loyal” to whatever Sylvia said.

However, she changes during the course of the story, gradually developing into a thoughtful character. In contrast, Sylvia reacts in the opposite way. She is a bold and bossy girl who stands out in many ways. However, her narration clearly shows that she is vulnerable inside; when she finds out the outrageous prices of the toys, she is utterly stunned. She feels the sense of inferiority, even shame. On the way back, she thinks about a thirty-five-dollar toy clown, and is surprised to find how much thirty five dollars can do to her family. However, she is not willing to show her feeling to Miss Moore and other children. Sylvia is a round character; she is a complex character and well developed.

The third category includes Mercedes. She does not understand the significance of the toys suggest. Mercedes is different from other characters; she is the only one who has a desk at home. She boasts, “I have a box of stationery on my desk and a picture of my cat. My godmother bought the stationery and the desk,” (pg. 92) and this statement angers the other children. She aspires to live like white people who spend a lot of money on toys. While other children are astonished by the price, Mercedes is the only one who remains still. When the other children hang back in front of the toy store, Mercedes was the first one to enter. After the group returns to the neighborhood, she says, “I’d like to go there again when I get my birthday money.” (pg. 94) She does not learn any lesson. Instead, she wants to be more like white people. Mercedes acts as a character foil to Sylvia; her behavior, attitudes, and opinions contrast with those of Sylvia’s. She is a static character who remains unchanged; she is still selfish and arrogant.

Sugar’s statement leads the readers to the author’s thoughts about poverty and economic injustice in our society. The children in the story are from poor families, and they live in the slums. The poverty that they live in is introduced when Sugar says that the sailboat costs more than the food they eat in a year. Then it is further emphasized when Sylvia thinks about what thirty-five dollars can do for her family. After the field trip to the toy store, Sylvia realizes the discrepancy between the way the rich people live and the way her neighbors live, and she gradually becomes angry at the idea of economic inequality. The theme of the story becomes clear when Sugar questions whether a country with an unequal distribution of money is truly democratic. Through the narrator’s anger and Sugar’s incisive statement about the unfairness of the society, it is apparent that Toni Bambara wants to illustrate that while some people are faced with poverty, others waste money on inconsequential possessions. Therefore, money should be distributed equally to all.

Through the use of informal diction, the author provides a courageous voice against unjust society. The thoughts and statements of characters enrich the theme of the story even more. The United States is not the only nation with unequal distribution of money. While we are spending money on insignificant possessions, many people around the world suffer from poverty and poor education. By incorporating short story elements and integrating them, Toni Bambara draws us closer to this open-ended story and challenges us to think more about the unfairness of society. 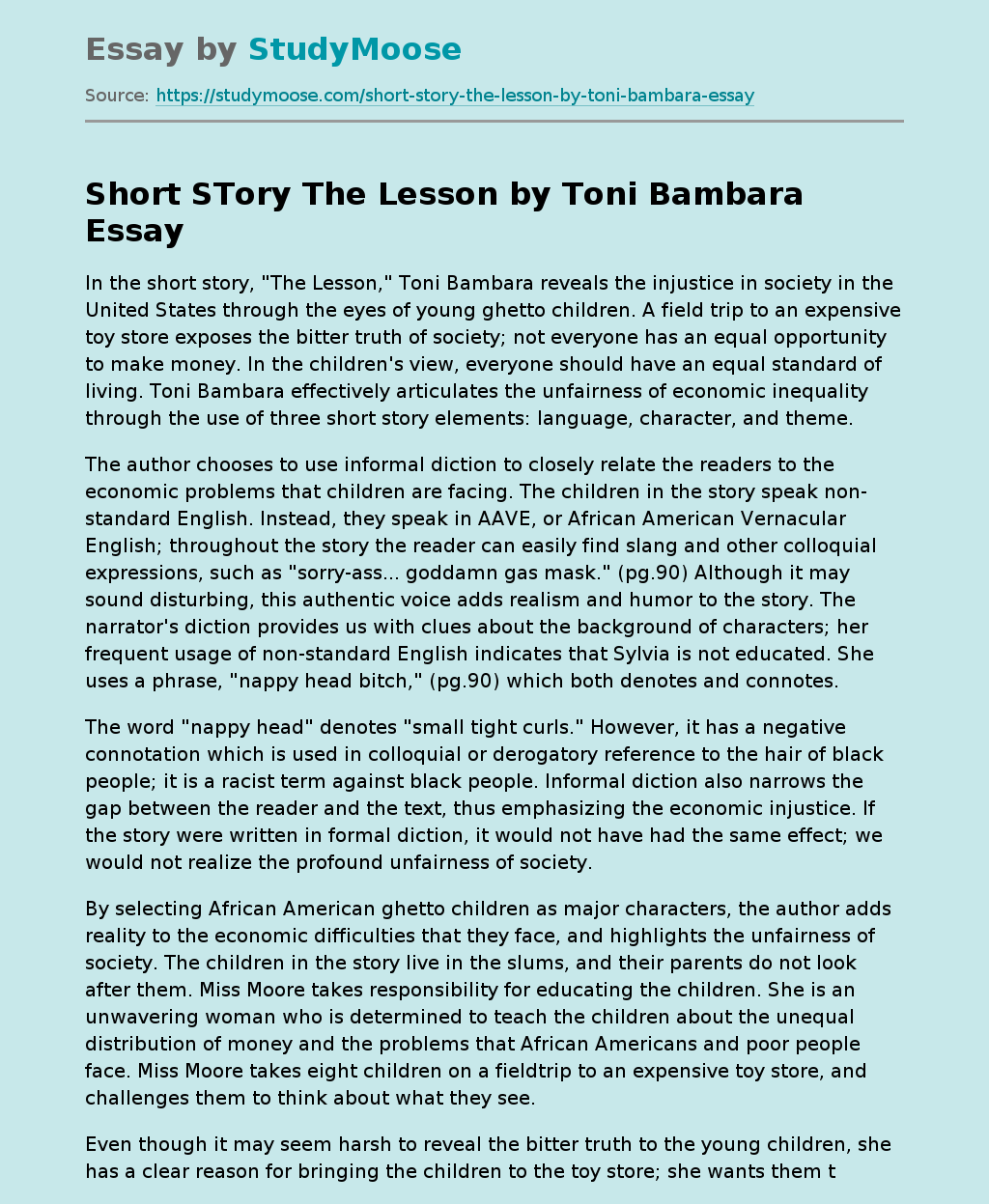