Loss of Innocence in To Kill a Mockingbird

“Maycomb was an old town, but it was a tired old town when I first knew it. In rainy weather the streets turned to red slop; grass grew on the sidewalks, the courthouse sagged in the square.” This environment as Scout Finch accurately describes is not the best or conducive place for young children, loud noises, and games. In the same way as the children, the adults of the novel played games that came from their imaginations, and they themselves are the ones who provided the fear for everyone.

Don't use plagiarized sources.
Get Your Custom Essay on Loss of Innocence in To Kill a Mockingbird Just from $13,9/Page

As most children do Jem, Scout, and their newly-found friend Dill find amusements to make the days pass by with excitement. When they first met Dill at the beginning, the day’s play is in the backyard. The implication is that it becomes routine for them to play and that each day brings a different experience.

When Dill joins them in their daily adventures, they begin to create more elaborate activities.

Many days they spent improving the treehouse, and acting out parts of plays by Oliver Victor Appleton, and Edgar Rice Burroughs. There games of Tom Swift the Rover Boys, and The Ghost are the sources of their pleasures for hours and days upon end. Once these games seem rot and overplayed they decide to make Boo Radley come out. Thus the “Boo Radley”, plays begin. These plays are simply for amusement in the end, they teach Jem, Scout, and Dill lessons about respect, courage, and understanding. The “Boo”, games begin with a simple dare that Jem has to carry out in order to gain respect from his sister and friend. Scout and Jem both learn about courage through the first Boo game they invented by testing their levels of fear.

The game has turned into a dangerous, scary expedition that leaves all three of them shaken. Boo’s unspoken, unseen presence at the fire put him in a new light in Jem’s and Scout’s eyes. Yet again, they see reality and their games slowly fading and losing their meaning. The burning house and Boo’s reappearance show Jem and Scout more pieces of reality and causing them to push that much closer to reality and the adult world and that much more of their innocence and childhood is lost.

As the trial crept closer, Scout and Jem each have to test their self-control in accepting or ignoring the multitudes of “nigger-lover” comments coming their way, by adults as well as children. Scout ends up losing all control when she beats up her cousin Francis, for testing her patience by criticising others. Though Scout doesn’t totally understand her mistake until her uncle Jack, punishes and guides Scout to realization. Jem, of his own fault, has to read to Mrs. Dubose every day and eventually he learns an important lesson. Jem and Scout learn about death and they gain an understanding for the type of person Mrs. Dubose is when they see how her views on life have an effect on her death. The adult games have been going on for a while but Scout and Jem are just beginning to see the games evolving.

The most difficult matter for Jem and Scout to understand soon comes to be the trial. Though they have been faced with ignorant people calling them “nigger-lovers”, they haven’t truly had a full understanding of the slang term until the trial is upon them. Scout, Jem, and Dill experience a faint taste of the adult’s games’ flavor, watching from afar as the mob of common men around Maycomb County gather around Atticus, threatening his and Tom’s lives.

Scout still in her innocence, breaks the crowd by recognizing Mr. Cunningham and she, proceeds to praise his son Walter without thought to the fact that Mr. Cunningham realizes that he is a father, not just part of a nameless mob, and, in a sense, he “walks around in Atticus’s skin” for a moment. The individualizing Scout has done humanizes the originally dehumanized mob and ends the threat to many lives at stake. Scout does not realize the extent of her actions until later on and the understanding raises her up a level of maturity. The game that the men are playing puts lives at risk and shows Scout that adults play with strange sets of rules. She reaches an understanding in the jailhouse scene that still continues to push her into the adult world.

Loss of Innocence in To Kill a Mockingbird. (2017, Jan 03). Retrieved from https://studymoose.com/loss-of-innocence-in-to-kill-a-mockingbird-essay 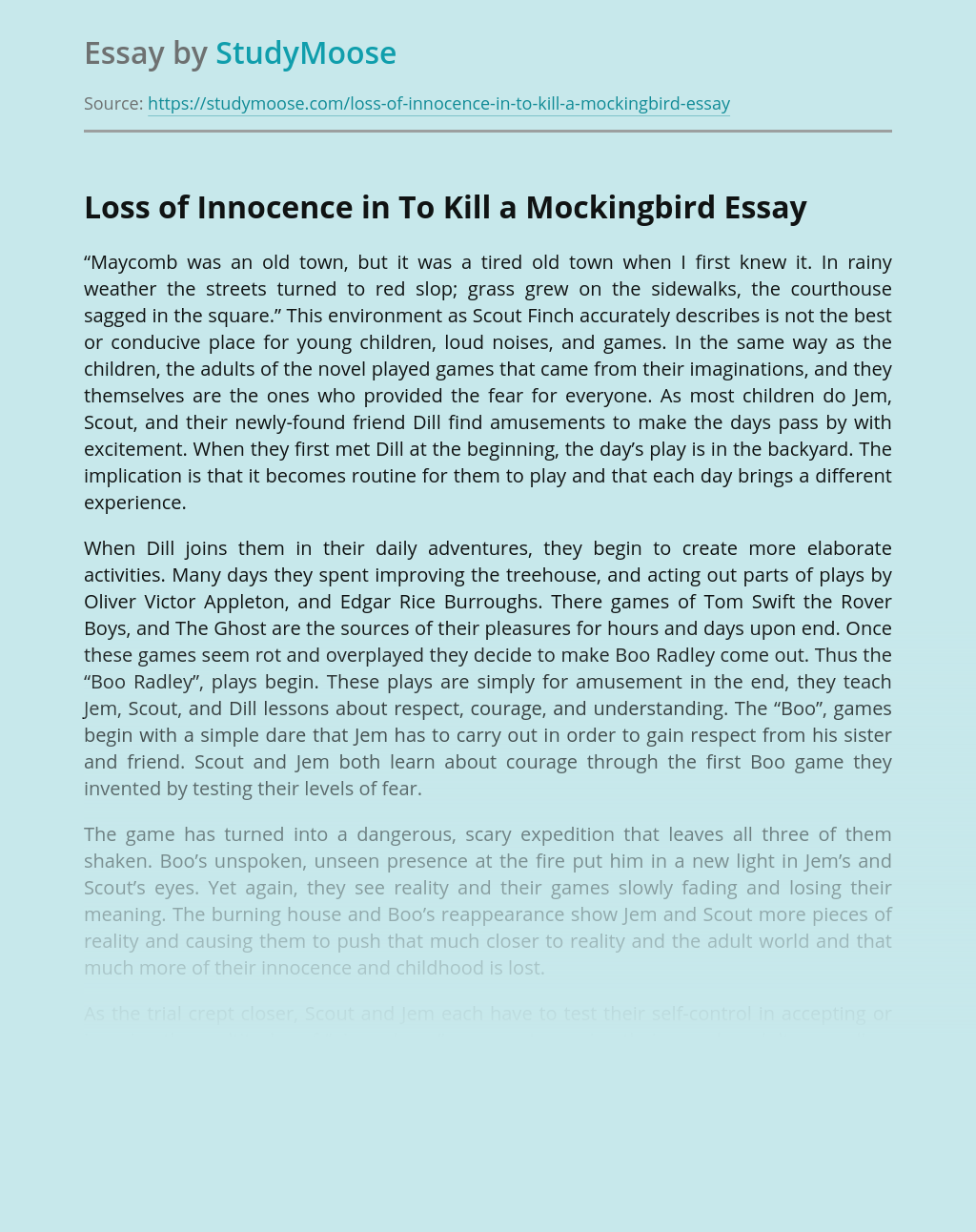 Rate this post Interpretive Essay To Kill a Mockingbird is a classic novel about a young girl, her brother, a close friend their adventures in finding Boo Radley, and growing up in a prejudiced society. The book’s main character, Jeane-Louise Finch, nicknamed Scout, is shown how cruel and unfair the world can be, especially southern...

Characters that influence scout in to kill a Mockingbird

Rate this post There are many positive influences that help shape Scout into the person she becomes at the end of the novel. In Harper Lee’s To Kill A Mocking Bird, there are 3 main characters that have an effect on Scout’s maturity. Jem Finch influences Scout because he is always looking out for her...

Get Essay
"To Kill A Mockingbird" by Harper Lee

Rate this post In the novel To Kill a Mockingbird, Harper Lee tells the story of Scout and Jem, two young children who learn about racism and injustice in the small town of Maycomb, Alabama, in the 1930s. The children’s father, Atticus, is a lawyer who is appointed to defend Tom Robinson, a black man...

Rate this post In the Novel ‘To Kill a Mockingbird’, Atticus Finch is portrayed as a truly unique individual. Atticus is a morally bound intelligent lawyer who believes in true justice for all. As a father, he puts a lot of emphasis on being an excellent role model for his children. The acts of heroism...

To kill a Mockingbird by Harper Lee: Idea of Justice

Rate this post “…in this country our courts are the great levellers, and in our courts all men are created equal. Don't use plagiarized sources. Get Your Custom Essay on Loss of Innocence in To Kill a Mockingbird Just from $13,9/Page Get custom paper ” Describe and explain how justice and injustice are represented through...

To Kill a Mockingbird: Walking in Their Shoes

Rate this post Many authors utilize symbolism in their stories or novels for several reasons. Ideas, objects, and characters can be related to these symbols to add a deeper meaning to the story. Writers can use these symbols to communicate a more profound impression than what they actually engrave on the pages. These unique symbols...

Courage and Bravery in Lord of the Flies

Rate this post In amidst of the tragic events that occurs in the town of Maycomb, one positive theme that stick out throughout the whole time is nerve. Its existence is observed by the storyteller Scout from the characterisations of the central character Atticus, his impact on his children’s upbringing and other the members of...

To Kill a Mockingbird Newspaper Article

Rate this post Big Scandal By: Jessica Morash Above shows defence Atticus Finch and Tom Robinson Under the authority of Judge Taylor in the small town of Maycomb County, a black man named Tom Robinson (age twenty-five) was allegedly accused of raping Mayella Ewell (age nineteen). The events being told had originally happened according to...