Prejudice and Innocence in To Kill A Mockingbird

The main character of the movie adaptation of To Kill A Mockingbird, Scout Finch, in many deeming aspects of her story demonstrates significant similarities between the main character from the novel Jasper Jones, Charlie Bucktin. One of the first main similarities between the two is their father figures, Atticus Finch and Wesley Bucktin. Both of these men are considered highly intelligent and demonstrates the understanding of being a good role model for the two children. In To Kill A Mockingbird Scout remembers an incident she had with another boy at school where he called her father an “n-word lover”.

Don't use plagiarized sources. Get your custom essay on
“ Prejudice and Innocence in To Kill A Mockingbird ”
Get custom paper
NEW! smart matching with writer

Scout recalls of the situation and Atticus, shocked and quite taken aback, quickly informs Scout that she should not say that word and explains to her about the different views and opinions of the opposite party. Much like in To Kill a Mockingbird, in Jasper Jones Charlie asks his Wesley what a “half-caste” is and what does it mean. Just like Atticus’ reaction, Weasley is very taken aback and tells Charlie not to use that word again.

Proficient in: Character And Integrity

Both Charlie Bucktin and Scout finch also have a moment of coming of age and loss of innocence. For Charlie, the most notable moment of coming of age was when Jasper Jones convinced Charlie to sneak out with him. This was the first time Charlie had ever done something deemed as rebellious, so this action was a huge step in his coming of age story. After this moment, he continuously pushes himself to do things he would have never done before.

However, the moment where Charlie loses his sense of child-like innocence is when he sees Laura’s body hanging from the tree.

In that moment his whole life changed and his perspective on the world shifted forever. For Scout, her coming of age and loss of innocence was discovered in the courtroom scene, where Robert Ewell was accusing Tom Robinson of sexually assaulting his daughter, Mayella Violet Ewell. Similar to Jem Finch and Dill Harris, Scout loses her innocence and overly more positive outlook onto the world during the Tom Robinson trial after she witnesses Judge Taylor reads the guilty verdict, and continuously discovers the obvious and down outright racial injustice firsthand. Scout develops an awareness of her community’s unconcealed and bias prejudice, just like Jem and Dill. None of the kids no longer views Maycomb as a normal town, but a town with extremely high levels of prejudice and favouritism.

Prejudice and Innocence in To Kill A Mockingbird. (2021, Jan 29). Retrieved from https://studymoose.com/prejudice-and-innocence-in-to-kill-a-mockingbird-essay 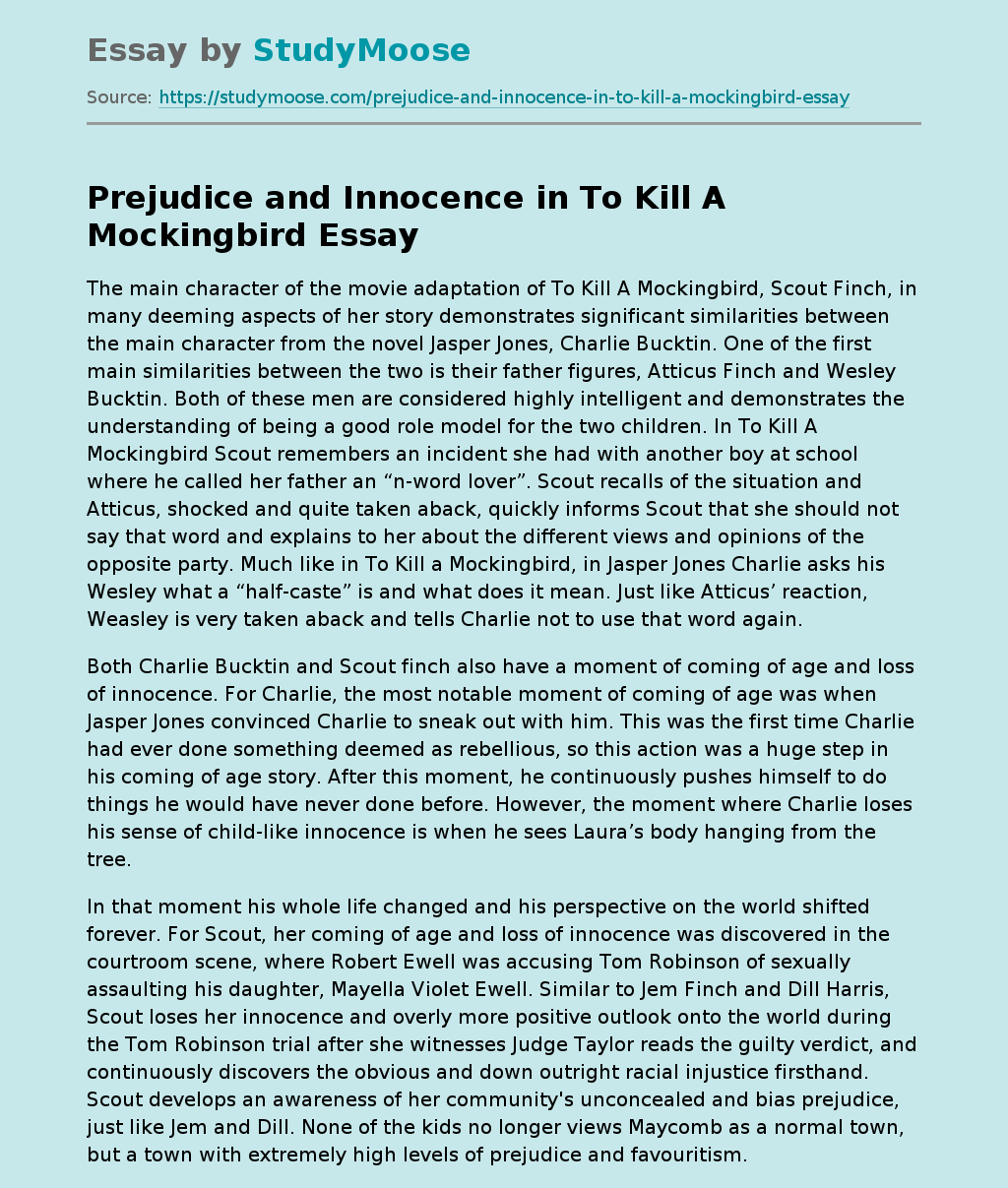