Loss of Innocence in Lord of the Flies Essay

Within the novel innocence is progressively lost through the boys. The boys were placed in a situation where they had no other choice but to grow up, and grow up fast. These boys were put in a very traumatic situation and they had to learn on their own and from each other how to survive and almost create a thriving society all on their own. Slowly they learn that their needs to be a leader, but there are no adults to precede the role of authority.

Don't use plagiarized sources.
Get Your Custom Essay on Loss of Innocence in Lord of the Flies Just from $13,9/Page

Therefore the children resume power and take the role of authority. All these things make the boys lose their innocence and become very violent. No one is completely innocent and everyone has the ability to turn violent, this is demonstrated in William Golding’s novel, Lord of the Flies.

Having their plane crash on an abandoned island with no civilization is something everyone would find traumatizing, especially boys from the ages of about 6-12. With no adults many of the boys do not know what to do.

Being put in such a traumatizing situation they learn how to grow up very fast. This is where a lot of the boys innocence is lost simply because they do not know how to act as adults and because of this they act in a violent matter “You should have seen the blood!” (70). Here is an example of how the boys take violence as something exciting, something fun, when really there is nothing good or fun in violence.

Very quickly the boys realize that they need to start some survival skills if they would like to stay alive. For some of the boys this is all new, some know nothing. Luckily others have been put in situations where they have needed survival skills so some can think creatively and use materialistic objects to survive. “His specs- use them as burning glasses!” (40) Here is an example for the boys using materials they have with them to survive on the island alone. They use Piggy’s glasses to create a fire by reflecting the sun off of them. With no adult or no authority to tell them what to do, the boys have to know how to survive on their own and work off of each other.

These boys have never had to take over a role of authority that normally adults have. They have never had such power to control people. This causes complete chaos and lots of violence breaks out due to the feud between Ralph and Jack. The problem with children resuming the roles of adults is that they do not have the experience or knowledge to resume these roles. There is a major lack of authority and power on the island. What happens is that both Jack and Ralph resume authority which divides up the group of boys.

“’I’m chief,’ said Ralph, ‘because you chose me. And we were going to keep the fire going. Now you run after food—‘”(150). This is Ralph claiming his authority. “I ought to be chief,” said Jack with simple arrogance, “because I’m chapter chorister and head boy. I can sing C sharp.” (22). This is Jack claiming authority. Both boys believe that they have authority and they do not get along with one another. Jack turns quite violent in the novel and is violent towards the other boys. The violence that the boys have towards each other is a major part of their loss of innocence.

I believe that the boys in Lord of the Flies suffered from loss of innocence in a very fast and drastic way. They had to learn how to move on from such a tragic and traumatizing situation and learn on the spot how to survive as well as well as how to thrive as a society and work together. Although the boys might not have succeeded in their objectives, but the efforts made to work towards these objectives are what caused their loss of innocence. There are people who will never be deemed violent, whether its because of their age or level of maturity. Small children are perceived as being innocent and adults are seen as mature and self-composed. Yet, William Golding presents a very different opinion in this novel. Golding suggests that under certain circumstances and in the right situation, anyone, even a child can become a savage. Everyone has the ability to turn violent it is just a matter of the situation and the circumstances.

Loss of Innocence in Lord of the Flies. (2016, Sep 26). Retrieved from https://studymoose.com/loss-of-innocence-in-lord-of-the-flies-essay 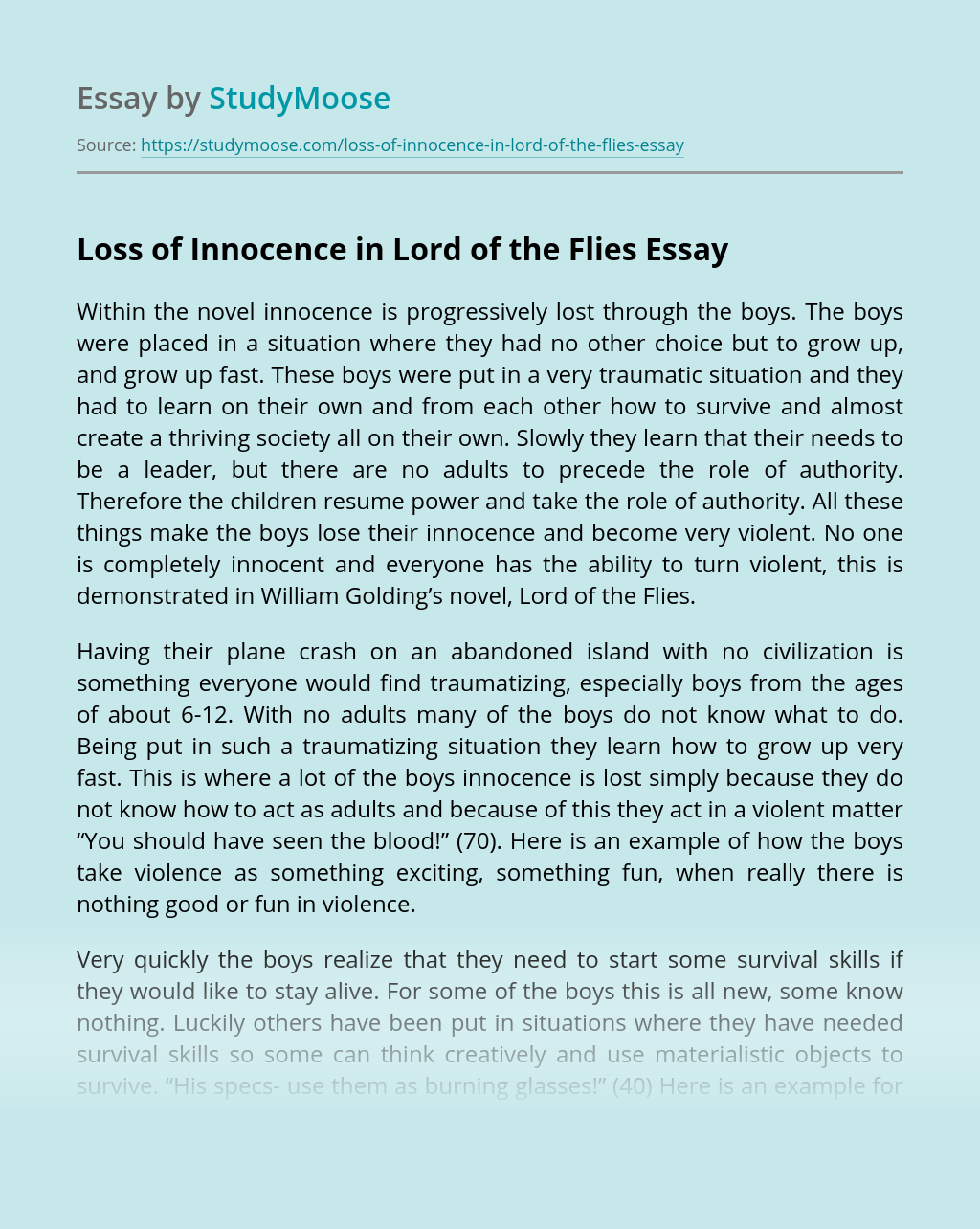 Chapter 1 “The Prison Door” 1. What colony is the setting for the novel? Boston Massachusetts 2. Where in the colony does the opening chapter take place? In the jail 3. For what 2 “practical necessities” did the new colony set aside land? A cemetery and a prison. 4. Who is Anne Hutchinson? How does... VIEW ESSAY

Introduction Thomas Merton went through a significant conversion in his youth and turned into a prominent Catholic author and spiritualist. His autobiography “The Seven Storey Mountain” discusses his life from childhood to adult and the conversion to Roman Catholicism and entry into a monastery.  The title and the sequence of this book were enthused by... VIEW ESSAY

View sample
Get Essay
Of mice and men - dreams and hope

Hopes and dreams help people survive even if they never become real. How true is this for the characters in ‘Of Mice and Men’? The novel ‘Of mice and Men’ was written by John Steinbeck and is set in Salinas and Soledad California in the 1930s when life was hard for so many people because... VIEW ESSAY

View sample
“The Way Up to Heaven” by Roald Dahl

The short story that I chose to be the subject of my literature analysis is “The Way Up to Heaven”,written by the famous author named Roald Dahl. In my opinion,Roald Dahl wanted to convey that marriage was supposedly being built by having tolerance and understanding as its base.Its the other other way round when it... VIEW ESSAY

This is an awsome essay! Do not hesitate to utilize it. Excellent comparison of books, excellent work. novels. Throughout Lord of the Flies and Heart of Darkness the value of restraint is significantly stressed. This being the restraint to remain human and keep sanity. In Heart of Darkness, Marlow was able to remain his restriant... VIEW ESSAY