Logitech is an innovative global provider for several technological accessories and peripherals. Logitech become incorporated in the early 1980’s and nearly three decades later it had roughly 40% of the market share in arenas such as Mice, Webcam, and Remotes. In order to fully understand Logitech’s success it is important to understand their strategy for growing but also their strategy for the issues they have faced. And ultimately deciding what will be their competitive advantage in the future. In order to understand the strategy of Logitech is it imperative to conduct a brief external analysis, beginning with the general environment.

The general environment focuses on demographic, economic, political/ legal, socio- cultural, technological, geographic, and physical environmental trends. These trends help analyze what the next strategic moves should be. In Logitech’s case it is crucial for them to analyze all seven trends but focus on the technological trends. Next, an industry analysis needs to be done in order to gain an idea of what kinds of competitive forces the industry will face.

The third step in conducting an external analysis is understanding the competitor’s objectives, strategies, and their capabilities. Logitech realized early on whom its competitors were, Creative Technology Ltd., Microsoft Corporation, and Royal Philips Electronics, and was able to differentiate its products from them. Strategy is a set of commitments and actions designed to exploit core competencies and gain a competitive advantage.

Based on Logitech’s objectives of growth and earnings, they enacted a few key strategies in order to achieve their goals. One strategy was acquisition; Logitech realized that to enhance the company’s development it was crucial to expand their portfolio into other markets and not just the computer mouse. This strategy was seen through the acquisition of QuickCam PC in 1998, Labtec, Inc. in 2001, Intrigue Technologies, Inc. in 2004, etc. After Logitech’s initial product, they realized that they would have to be proactive in finding innovative ways to grow and in 2000 they introduced their first gaming console controller. Followed quickly by the production of Logitech’s io Personal Digital Pen.

Logitech’s competitive advantage has been the first- mover advantage, allowing them to build a rapport with buyers enabling them to have larger market segments. This is seen with their pioneering of the computer mouse and keyboard, as well as having been on the forefront in video conferencing. The case also states, “Instead of following market trends, Logitech has often created them.”- an indicator of their first- mover competitive advantage. Although Logitech had much success with its strategies of innovation and acquisition, they have also had their fare share of implications, some of which they have overcome and others that remain. One critical issue that Logitech faced was the recent financial crisis of 2007/2008. Because technological products are a luxury good, consumers tend to cut back when there is less disposable income. This can be seen in the 9% decrease, 29% decrease, and 39% decrease for sales, operating income, and net income respectively from 2009 to 2010. One method that Logitech maneuvered the crisis was by reducing its workforce by 15%.

Additionally, they cut dividends causing their earnings retention ratio to increase, which give them excess cash for R&D as well as excess cash for acquisitions. Another issue that Logitech faced was having numerous manufacturing plants dispersed globally. After Logitech realized that these dispersed plants were hindering their growth, they consolidated. This allowed them to increase their competitiveness and maintain lower priced products. The examples above relate to issues that Logitech faced but were able to overcome. However, there are still issues that Logitech faces but have unable to resolve. The dominant challenge that Logitech faces currently is in regards to evolving buyer needs. In 2010, Apple enhanced their touch screen technology by incorporating built- in accelerometers, which eliminated the need for mice or Trackpads. Additionally, Apple and Windows products now come equipped with higher quality speakers and camera, diminishing the need for Logitech peripherals. With the decreasing market demand for Logitech’s peripherals, they must decide the strategic direction for their future.

From the inauguration of Logitech, they have always exceled in overcoming their competitors by their innovative strategy. In order to overcome the issues they currently face they need to bring innovation back to the table. They need to truly differentiate by focusing directly on attributes, consumer relationships, or links within or between firms. In addition to achieving differentiation as a competitive advantage, Logitech needs to redirect their strategic goals by examining the five major elements of strategy. They need to reevaluate their arena and narrow their market segments. They need to focus their vehicle on acquisitions, as they have done in the past. Redirecting their strategic direction and putting the focus back on innovative, cutting- edge product will help them re-differentiate from their competitors, which will allow Logitech to continue in the future as a premier technology company. 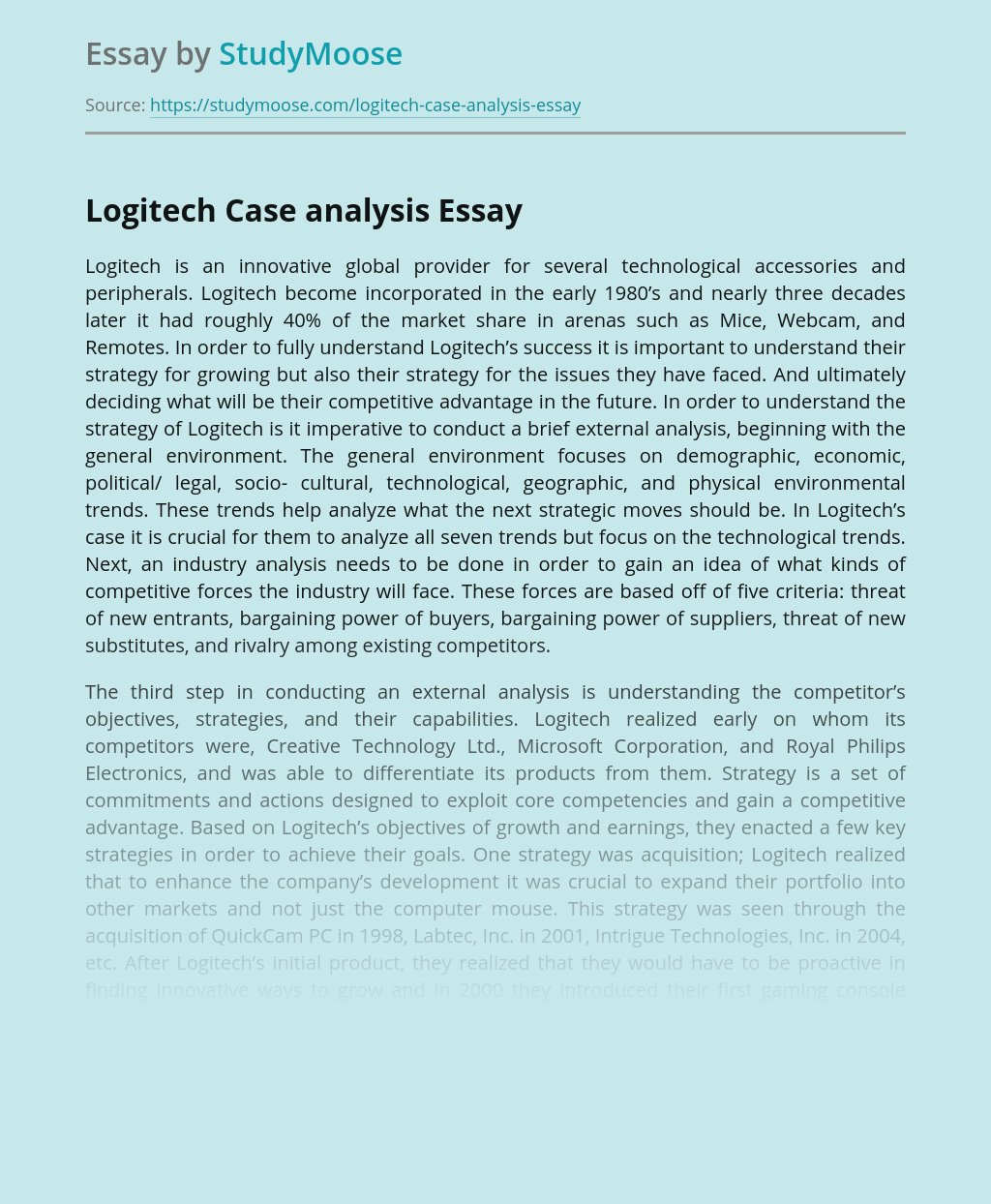