Living In A Multicultural Society

Today it is not unusual to see people of all different races, ethnic backgrounds or cultural groups living in one society. Our society is formed of a mix of different people and sometimes it is not easy to define ones self. Since we live in a society that is influenced by many social aspects expressing ones personal identity may be a hard task. Aspects of society that make it hard to identify ones self include a persons sexual orientation, their ethnicity and their lifestyles.

In society there are many labels that are put on people because of their sexual orientation. For years people have been taught that the correct way to live is to be in a heterosexual marriage. Andrew Sullivan states in his article What Are Homosexuals For? that “Heterosexual marriage is perceived as the primary emotional goal for your peers; and yet you know this cannot be your fate” (Sullivan 351). By stating this Sullivan makes it apparent that being a homosexual presents a challenge for the individual because he or she is considered different then others because of his or her sexual orientation.

Sullivan also inquires the idea that without homosexuals in today’s society there are some things that would never be made sense of or even acknowledge. Sexual orentation may not be accepted by many in society, but it is a growing idea that people are becoming more adapt to because it is being exposed more and more in society.

Another problematic area to identifying ones self is their ethnicity.

Society sometimes does not make it easy to express yourself if you are not white. What I mean by this is that sometimes because you’re of a different race other then white like Spanish or African-American there may be disadvantages for you in society. For instance, I have a friend named Pedro and because Spanish is the only language he knows fluently before taking regular English courses in college he must first take and pass English as a second language. Language barriers are a part of everyday life for minorities. Not only does this mean that they will have to learn our English language it also means that they must find a way to hold on to their personal cultural backgrounds.

A persons lifestyle can influence their role in society not only does it define who they are but it may present obstacles when trying to be accepted in society. Zora Hurston lived in an all black society and was conditioned to their way of life and knew no other. Hurston states, “White people differed from colored people to me only in that they rode through town and never lived there” (Hurston 385). It was not until Hurston left her society that she realized that her lifestyle was much different then others. She expected that people of different cultures or who grew up in other areas had the same mind set as her, she found this not true. Despite the fact that she was colored there were many things that differed between her and society as whole. It was not just the color of her skin.

A multicultural society presents obstacles to all humans, every person tries to find out who they are and where they stand in the world. Homosexual, heterosexual, Spanish, English, black or white it does not matter where you come from or what you look like there are always social changes, stereotypes, ethnicity differences and cultural differences, it’s just a way of life.

Living In A Multicultural Society. (2016, Jun 20). Retrieved from http://studymoose.com/living-in-a-multicultural-society-essay 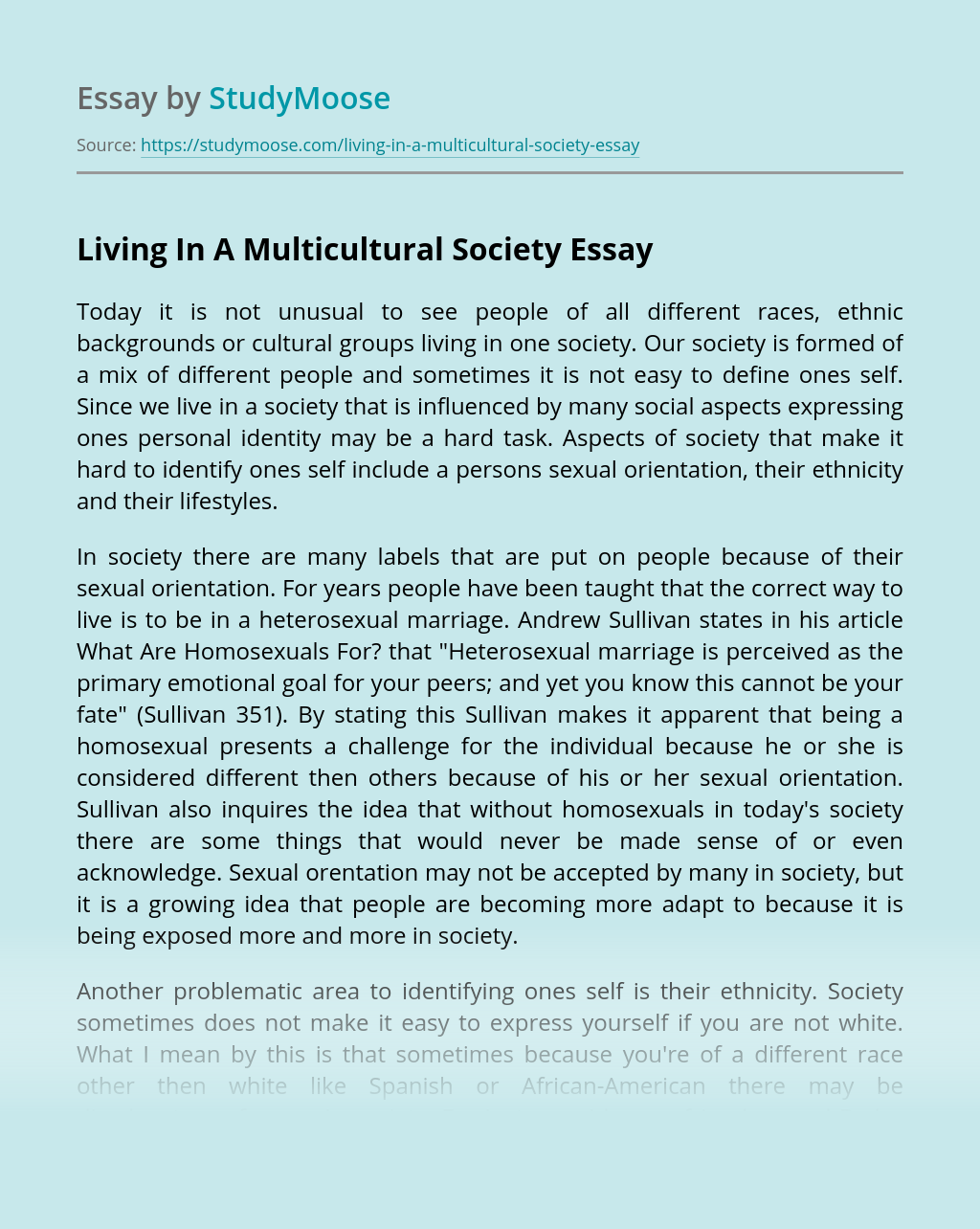 Don’t waste time
Get a verified writer to help you with Living In A Multicultural Society
Hire verified writer
$35.80 for a 2-page paper
Stay Safe, Stay Original