Little Miss Sunshine is a film about how families are always there for each other no matter how dysfunctional their family may be. Released in July of 2006, the film is directed by a husband and wife team, Jonathan Dayton and Vanessa Faris. The directors do a terrific job of keeping their audience engaged and amused throughout the film. The main character of the movie is a young seven year old girl named Olive Hoover, played by Abigail Breslin. Olive has always had a dream of being in a beauty pageant.

One day her dream came true, when she was accepted into a beauty pageant in California. Due to certain situations in the family, all family members are forced to indulge on this journey to California with Olive. Having completely different personalities, each family member creates comical conflicts between characters. From this story of family bonds, viewers will realize as long as you strive for something you truly love, your family will be behind you whether you win or lose.

The family of Olive has many different quirks, from drug attics to suicidal members, nothing seemed right in Olive’s mind.

Richard and Sheryl are the parents of Olive. Putting together s nine step plan to success, Richard thinks he is a brilliant. His family members and others around him consider him a complete loser. Frank, Sheryl’s brother is going through depression and suicidal thoughts due to a recent break up with his former boyfriend. Being forced to live with a family member who can watch over him, Frank has to stay in Paul’s room, Olive’s brother.

Paul decided that being a jet pilot for the Nietzsche is the only thing he wants in life, everything else is absolutely stupid. For over a year he hasn’t spoken one word, using pen and paper to communicate with the outside world. This dysfunctional family would begin embarking on a cross country adventure that will change their lives forever. In Little Miss Sunshine, the film helps render the themes of family bonding in a dysfunctional way. Techniques in any movie are very important for a director to produce.

One technique in this film is instead of using multiple themes in the film, the dominate theme is family. In many other films, viewers are introduced not only to the main characters, but also introduced to numerous side characters. Dayton and Faris do a very good job on only giving the main characters screen time, and no other side characters. This makes the viewer truly understand how the Hoovers work and bond together since there are no outside character. The whole dynamic of the film with the color, light, language and so forth gives the film a special painting in the viewer’s head. The lighting in the film is more granny than clear, giving off a sort of odd sense while watching the movie. Who would have thought pageants could be created into such a big deal for young girls. For Olive it was. All she could think about was standing on stage receiving that beautiful crown in front of a crowd of people.

From the very beginning of the movie, the first scene is of Olive watching Miss America win in the U.S. pageant and being in awe of how she reacts. Her Grandpa, Edwin is the one person in her remote family she really looks up to and knows she can always ask him anything. He has been teaching her a solo performance for the pageant in California. Unlike most mature and wise grandparents, Edwin is a very perverted druggy, causing a bit of concern to Olive’s mother and father, since he, rather than a sensible adult, was the one coming up with a solo performance for Olive. Symbols in a movie are always very important because they are the effects that catch the viewer’s eyes. One example of a symbol in Little Miss Sunshine is the forty year old yellow volks wagon the family uses on their journey to California. However, the van definitely is a perfect match for the Hoover family. It matches how the family stands out because of their strangeness.

The van also brings the family together. For instance, when one family member tries to start the van he has trouble, but once the whole family works together to start the van they have no trouble. The restaurant menu is also another symbol. On the road the family stops at a restaurant to grab a quick bite. Creating a big controversy when Olive states she wants to order ice cream with her pancakes, the family says how she should not have all that food since she is going into a pageant. The menu symbolizes America’s obsession with diets and weight. The final scene of the movie shows how families are willing to do anything while standing behind a family member. Olive’s performance turned into a very provocative dance. Instead of her dad going on stage to remove Olive from the pageant, he begins to dance with her.

Then the rest of the family joins them on stage. Even though Olive lost the competition and was never allowed to come back to any pageant in the state of California, she didn’t care. She had a blast performing in her first pageant and she knew her family was proud of her. In the end, Olive was the one who brought her family together. She taught them that it doesn’t matter if you win or lose, the way you look or act, family is all you need. Little Miss Sunshine depicts numerous conclusions. Stand behind your family no matter how ridiculous they may seem. Who cares about what others think about you. Maybe you don’t have the skills someone else has or the looks but as long as you try you know you are a winner in your own heart no matter the outcome. Sometimes there really is sunshine on a cloudy day. 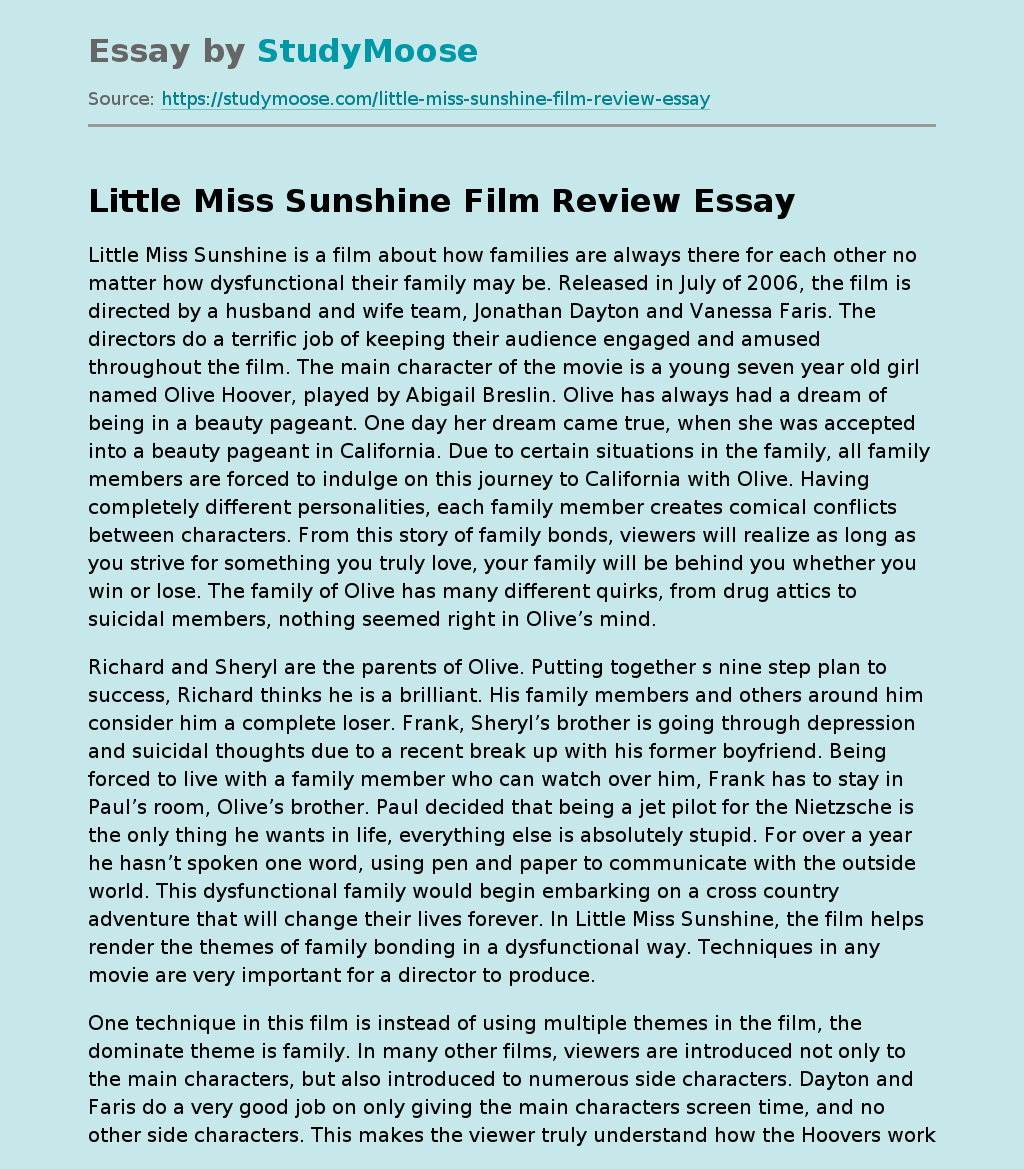