The directors of the film “Little Miss Sunshine” satirize aspects of American society by completely humiliating and twisting the basis of many issues within American civilization. Numerous aspects are parodied throughout the film, however the angle in which the theme of personal failure and beauty contests is mimicked is particularly intriguing. Personal failure is highly satirized in multitudinous ways during the film, and the subject has been accentuated to the extreme.

Richard’s nine steps to success completely blocks out failure, and when his program is not sold amid the movie, the scene was developed to express so much irony.

Don't use plagiarized sources. Get your custom essay on
“ Little Miss Sunshine ”
Get custom paper
NEW! smart matching with writer

Throughout the entire movie, personal failures and achievements are both considered and accentuated using different film techniques. Camera distance and viewpoints are used when both Richard and Dwayne experience personal failures within the movie. When Richard hears the news from Stan Grossman that his program deal had slumped and was not sold, the camera was very distant from Richard.

Showing both him and the nature of the area, this allowed us to see and hear the event from a more external perspective.

As Dwayne runs out of the car when he discovers he cannot become a pilot, the camera angle changes from a close up, to a distance shot. This allows for the audience to take in the atmosphere of the situation and shows that during the present moment, Dwayne is all by himself in his position. Close up shots are used when Dwayne falls to his knees and screams, which shows the disappointment and setback he is experiencing.

The mood soundtrack changes from a happy, up-beat song, to a very slow and depressing melody when Dwayne realizes he can never fly. In both situations, the satire is extremely blunt and gets straight to the dilemma of personal failure. Another evident personal failure in the film is when Olive humiliates herself and the entire beauty pageant when she performed her routine for Little Miss Sunshine. The narrative structure within this scene is Olive giving everything she has got into her dance, being the protagonist who is motivated by their desire to achieve a goal.

Throughout the movie, many obstacles stand in her way to arrive at her desired destination in Redondo Beach, California. These obstacles create conflict; however also allow some family members and Olive to overcome problems whilst traveling to the beauty contest. Despite the ups and downs of the family’s voyage to Redondo Beach, the protagonist being Olive, is able to achieve her goal of being in the Little Miss Sunshine beauty contest and the family’s questions and tensions generated by the conflict along the way are answered and resolved.

Throughout the scene when Olive was performing, many different film techniques other than purely narrative structure were utilized such as: camera distance/point of view, sound effects, mood, soundtrack and cinematography use of camera angles. All of these techniques cooperate together to allow for the audience to fully absorb the way this scene is set up to satirize beauty contents and show personal failure and the other two scenes to show purely personal failure.

Not only were film techniques portrayed in the film, several humorous techniques were put to use and stood out within the theme of personal failure. Caricatures were assiduously used throughout all roles in the movie, however the exaggeration of Richard’s persistence and obsession of winning and Dwayne’s vow of silence are played on intensely to show how ridiculous they are without saying it. The directors have adapted the film to make the movie more prominent for the audience to be able to reflect their own experiences to the events so that it is easy for them to relate to.

Irony is a huge factor when it comes to Richard; he is so overwhelmed by himself and his nine steps to success program that he is absolutely oblivious to his ignorance, which represents situational irony. Taboos, irrelevance to the plot and running jokes are also humorous techniques applied to the theme of personal failure. The most noticeable aspect satirized in the film is the theme of beauty contents. The song that Olive dances to, ‘Can’t Touch This’ by MC Hammer, in the competition is mocking the basis and perception of young girls beauty contests.

Olive’s Grandpa chose this song for her to perform her routine to because it patronises the whole structure of how tarty, promiscuous, immoral and ridiculous these obscene events are. Evidence in which shows the concept of beauty contests being satirized comes from film techniques such as the music soundtrack, cinematography, sound effects and camera distance/point of view. Humorous techniques exercised throughout this scene include satire, irony, tone, reflection on human lives and experiences, ridiculous situations and irrelevance to the plot. Little Miss Sunshine” utilizes film and humorous techniques to satirize aspects of American society.

The directors have carefully and thoroughly utilized various film techniques to make it evident to the audience the way they attempt to satirize themes throughout the movie. Overall, the most evident theme satirized within the movie was personal failure, due to the frequent amount of scenes related to the subject during the movie. “Richard, whatever happens, you tried to do something on your own, which is more than most people ever do. I include myself in that category. You took a big chance, it took guts, and I’m proud of you” (Grandpa). 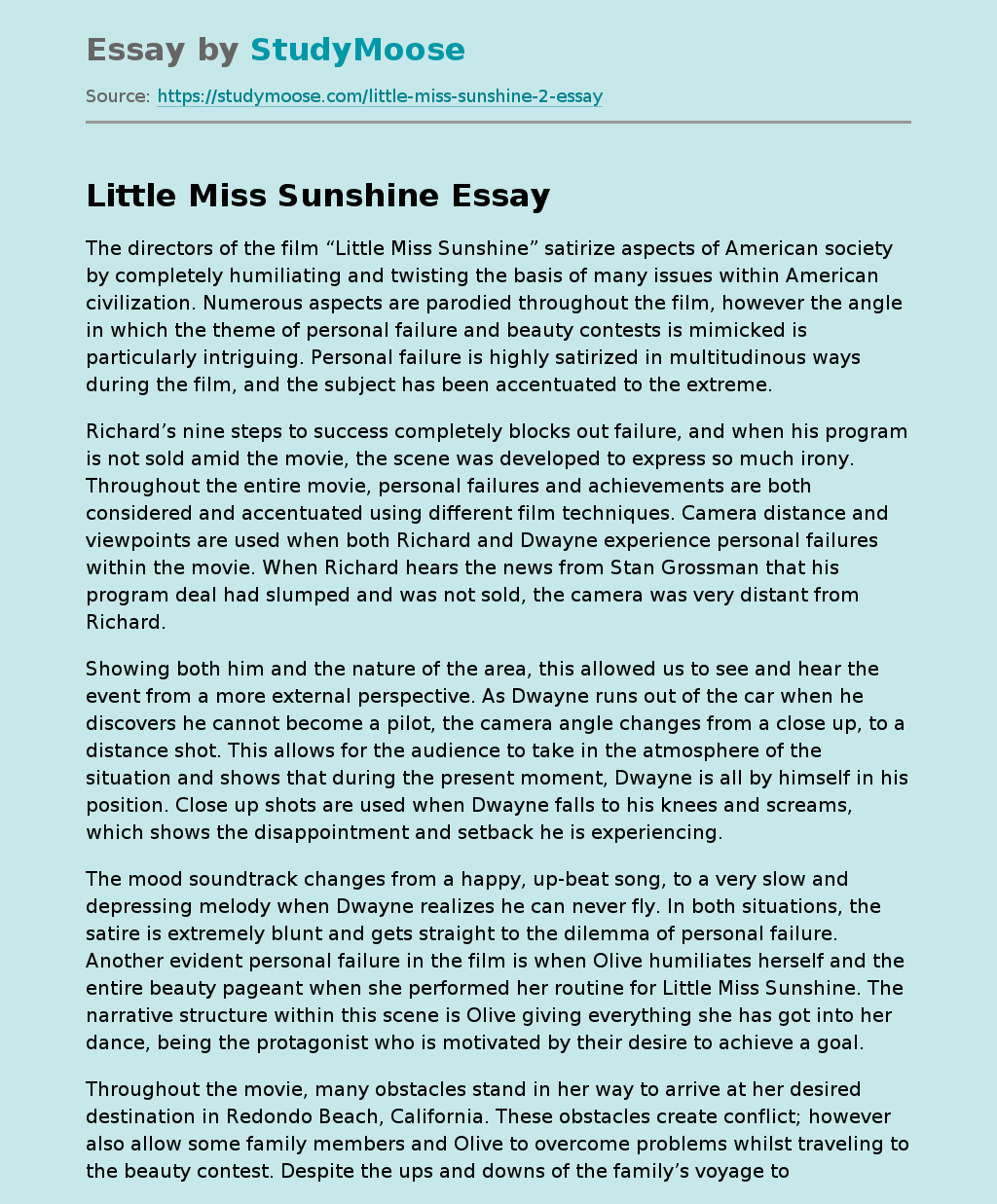