The 21st century is an era greatly influenced by “reality television”. If we’re not trying to keep up with the Kardashians, we’re watching Big Brother, Bachelors/Bachelorette, and Flavor of Love. This is a contrast from the 20th century, which was the era of the silver screen, the era of cinema. Rather than having little to no imagination like television today the films of this time era pushed the boundaries of our imagination and fulfilled and captured our wildest dreams.

Two of the greatest movies of this time were A Trip to the Moon, directed by Georges Méliès (1902) and The Great Train Robbery directed by Edwin Porter (1903).

In his movie A Trip to the Moon, Georges Méliès is an early example of narrative film, his introduction film editing and help distinguish narrative films and how they were seen in comparison of music, books, and theatre. Although his edits were simple, for example people disappearing win a cloud of smoke, meaning he would make smoke build in front of the actors, stop filming the scene, move the actors out of the frame, and start recording again thus making the audience believe that the actors instantly disappeared in front of their eyes.

This brought a new dimension into film, and introduced film editing to the world. He shot his films at 14 frames per second, his shots always remained stationary but what made these scenes amazing were his amazing sets designs, hand painted backgrounds and his in camera effects, Really took an audience who were alive before the first manned moon landing in 1969 to a world of pure science fiction and imagination.

Taking what Méliès introduced into narrative movies and running with it, Edwin Porter being the father of the “narrative”, introduced at this time what was considered state of the art filmmaking technologies that help further film narrative. In The Great Train Robbery, Porter introduced several Film Technologies such as cross cutting, double exposure, movement of the camera, tracking and panning, out of sequence shots, and colourizing of people and actions.

He also introduced a different film method which was location shooting, unlike Méliès who’s camera always remained stationary, and were shot on sets, Porter wasn’t stationary it moved with the actors, and his set wasn’t a set at all, is was outside, it was in the train, it was were ever the story took them. This took film narrative to a new level; it brought the audience on the journey, something film lacked before Méliès and Porter.

The result of their films telling a story helped them reach their goal and what they wanted their audience to get from the film and that was the story. A Trip to the Moon a film that follows a group of very intelligent astronomers as the hatch an intricate plan to travel moon.(Westminster, 2010) While The Great Train Robbery is a story about the 4 bandits who tie up and assault a worker at the train station sneak on the train, steal all the passengers’ money and shoots at them as the make a get away.

A child finds the worker at the train station tied up tells the sheriff and they go on a hunt to get the bandits. To compare these two films and say which one was better effective reaching it goal then the other, is hard, and practically impossible. They both told their stories, but if it weren’t for Méliès introduction of film editing many of the effects that were used in Porters film wouldn’t have happened.

A Trip to the Moon was the first science fiction film; the first of it’s kind ever. It was extremely popular and helped the cinema market transition into narrative films. Not to take away from Porter, The Great Train Robbery took what Méliès did and took to a whole complete level and help solidify narrative films spot in the cinema market. Comparing these films is like comparing the IPhone to the IPhone 5, of course the IPhone 5 is better and more effective at doing it’s job then the original IPhone but without the original IPhone there would be no IPhone 5.

Life without social media. (2016, May 06). Retrieved from http://studymoose.com/life-without-social-media-essay 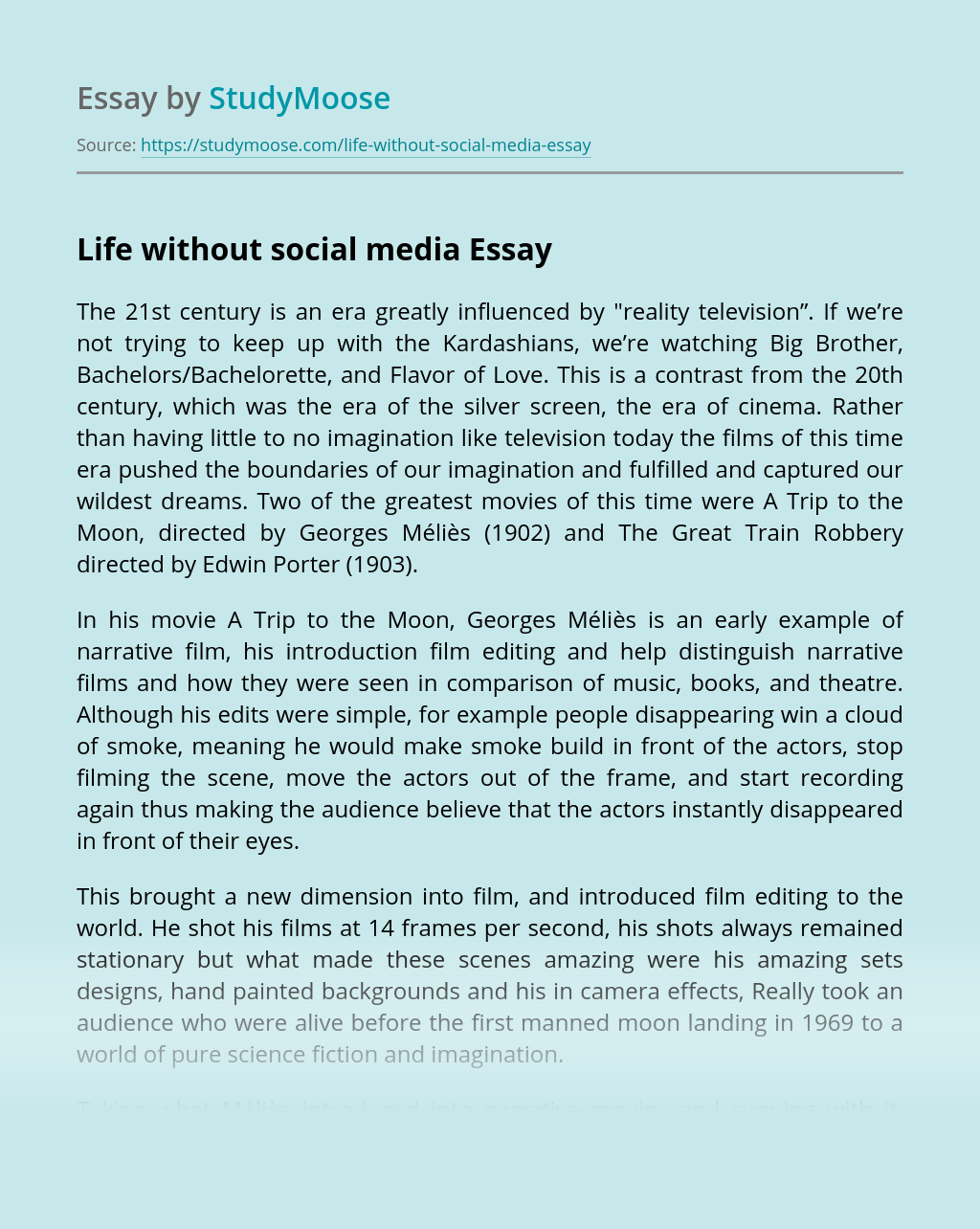 Don’t waste time
Get a verified expert to help you with Life without social media
Hire verified expert
$35.80 for a 2-page paper
Stay Safe, Stay Original