Life and Times of Frederick Douglass

First and foremost, Frederick Douglass had to endure the horrific treatment of slaves for throughout his childhood. In the beginning of the Narrative of the Life of Frederick Douglass, an American Slave, Douglass illustrates tragic lives of black slaves in the 19th century. Slaves had to work hard all year round, but their living conditions were horrible. Slaves did not have beds. They usually laid down on a cold and damp floor together and covered each other to keep warm when they are sleeping (Douglass, p23).

Don't use plagiarized sources. Get your custom essay on
“ Life and Times of Frederick Douglass ”
Get custom paper
NEW! smart matching with writer

The monthly allowances of food and clothing were very poor for each slave. “Eight pounds of pork, or its equivalent in fish, and one bushel of corn meal” (Douglass, p23), food supplement is far below the normally required of a working adult. Besides, a yearly suit of one slave cost less than seven dollars, and many of the clothes were made by cheap cotton fabric. The children unable to work only had two coarse linen shirts per year.

If they grew too fast, and clothes could not fit them in a long period of time, they had to be naked until next allowance-day (Douglass, p23). Above all, slaves were never allowed any education whatsoever. These horrible conditions are what Frederick Douglass grew up with.

Now let’s take a look at Booker T. Washington’s life as a child. When Washington was nine years old, the Civil War ended. All the slaves were set free. Washington, his mother, his step-father, and his brothers moved to Malden, West Virginia.

Washington’s step-father got a job there as a salt-packer. Although the family was poor, they always had enough food to eat. Washington grew up in a warm home, with food, sleep, and love. He also had an education. He heard of job openings in the home of General Lewis Ruffner. Ruffner owned the salt furnace where Washington’s father worked. Mrs. Ruffner made him work hard. She wanted the house very clean. She also wanted him to learn. So she gave him books. And she taught him good English, history, and some math. At last his academic skills were strong enough for him to gain admission to the Hampton Institute. When comparing these two great men’s childhood, we see that one was filled with hunger, pain, and neglect, the other filled, with freedom, opportunities, and education.

In addition, Frederick Douglass and Booker T. Washington received completely opposite treatment by the white race. Frederick Douglass has to endure being whipped continuously, just because of the color of his skin. Forcing people to work by whipping them had been already inhumane. Even more, masters and overseers were sometimes whipping slaves not only for punishment but also for fun. They got pleasure by whipping slaves vigorously and watching the victims bleeding, the more pain slaves felt the more pleasure slaveholders would get. They even invented kinds of whipping trick to make the atrocity became more interesting to them, such as making a slave “standoff from a suitable distance to be touched with the end of the whip” (Douglass, p29), this trick can raise great pain upon the victim’s back. Douglass endured many whippings in his life. Once Frederick was “rented” out to a man by the name of Edward Covey. Douglass arrives at Covey’s farm on January 1, 1833, and he is forced to work in the fields for the first time. His first task is to guide a team of unbroken oxen. The oxen are uncooperative, and Douglass barely escapes with his life. Finding that Douglass has failed, Covey orders him to take off his clothes and receive punishment. When Douglass does not respond, Covey rushes at him, tears his clothing off, and whips him repeatedly. Covey continues to whip Douglass almost weekly, usually as punishment for Douglass’s supposed “awkwardness.”

Life and Times of Frederick Douglass. (2020, Sep 15). Retrieved from http://studymoose.com/life-and-times-of-frederick-douglass-essay 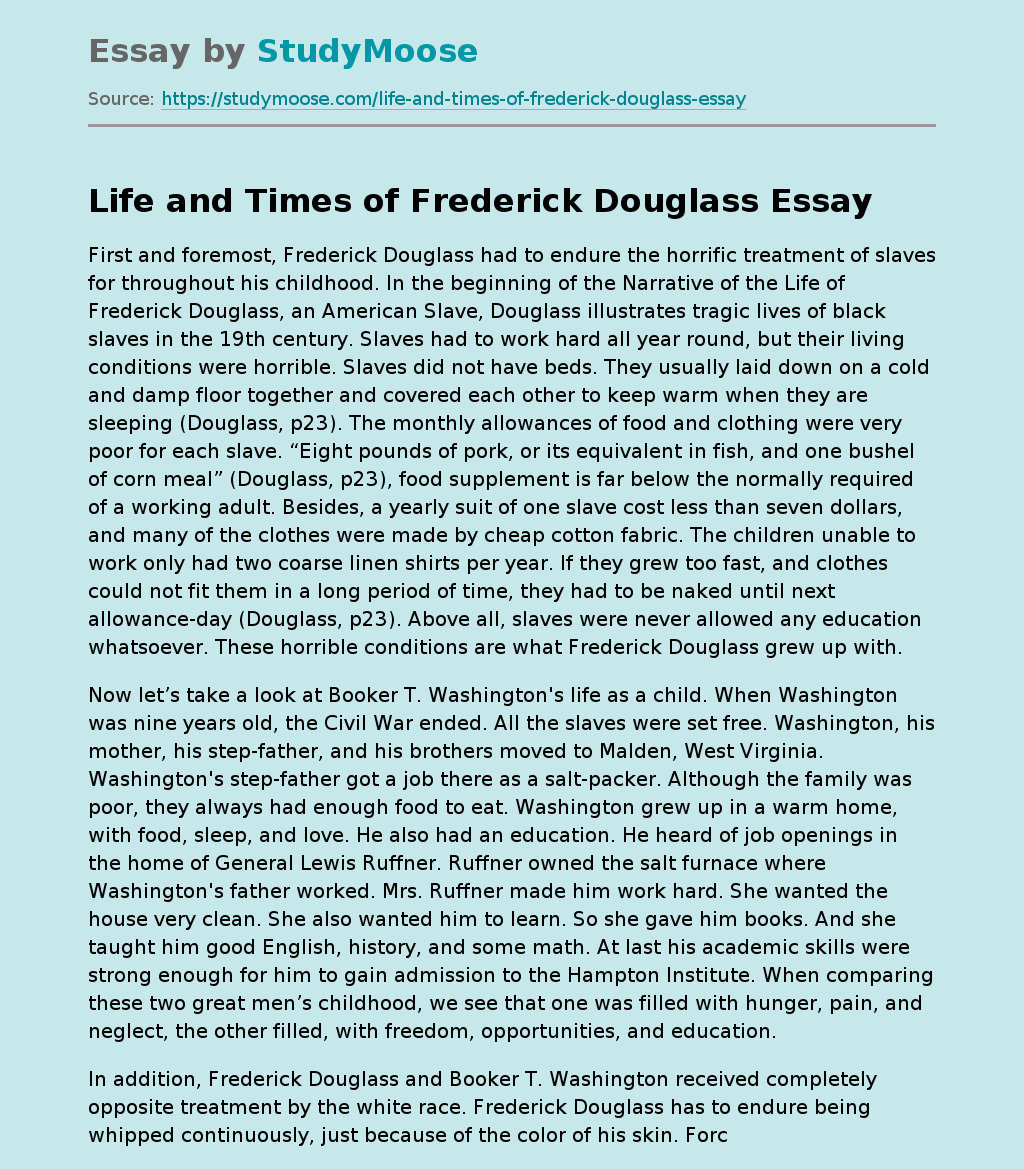