In court, Mary Warren gives in to Abigail and refuses to witness for John and Elizabeth as she starts to pretend to be witched by Mary. Trapped, the only way Mary would get out of Abigail’s trick was turning the accusations to Proctor. ‘You’re the Devil’s man! ‘ (Mary Warren, Act Three) As the girls were just making the situation more complicated for Proctor, he realises that the only way to liberate Elizabeth is to confess his sin of adultery to the court, proving the non innocence of Abigail.

Don't use plagiarized sources. Get your custom essay on
“ Liberate Elizabeth – The Crucible ”
Get custom paper
NEW! smart matching with writer

John Proctor was a man full of pride, however when he sees that Elizabeth would be gone, he becomes a man, just a man and does not even think what will be his consequences, if his beloved wife will be released. At the beginning of Act Two, Miller presents some points of the impact of Proctor’s affair with Abigail. ‘There is a pause. She is watching him from the table as he stands there absorbing the night.

It is as though she would speak out but cannot. Instead, now, she takes up his plate and glass and fork and goes with them to the basin. Her back is turned to him.

He turns to her and watches her. A sense of their separation arises. ‘ (Stage directions, Act Two). Even forgiving Proctor, Elizabeth naturally, still cannot see the same person in her husband. Proctor noticing the coldness, the sadness, after having been trying to please her, gets angry knowing that it is not working.

‘Spare me! You forget nothin’ and forgive nothin’. Learn charity woman. I have gone tiptoe in this house all seven month since she is gone. I have not moved from there to there without I think to please you, and still an everlasting funeral marches round your heart.

I cannot speak but I am doubted, every moment judged for lies, as though I come into a court when I come into this house! ‘ (Proctor, Act Two) Even in a phase that Proctor’s and Elizabeth’s relationship seems to be walking under rocks, neither Proctor nor Elizabeth give up the respect for each other, ‘I do not judge you. The magistrate sits in your heart that judges you. I never thought you but a good man, John – (with a smile) – only somewhat bewildered. ‘ (Elizabeth, Act Two) During the play, Miller presents John Proctor character with different variations of personality along the play.

From the moment that Proctor sees Elizabeth in a situation caused by his own faults, the audience discover a new side of Proctor, which previously could just be seen as an authoritarian, abusive and unfaithful man. Yet in Act Two, while Mr. Hale was in Proctor’s house trying to investigate why Elizabeth has been charged on the court of witchcraft, Hale brought up the fact about how Elizabeth and Proctor have not been following the religious puritan life, by not going to the Sunday’s Sabbath. Intrigued, Hale asks Elizabeth about her knowledge on the 10 Commandments.

She firmly agrees, saying that she is aware of them. He then, asks Proctor, who also confirms the question. Trying to find out the evidence, Hale asks Proctor to say the commandments. With some hesitation Proctor says almost all of them correctly, although in the end he forgets one. Elizabeth, after noticing that Proctor could not remember it, said the last one: adultery. ‘You see, sir, between the two of us we do know them all. (Hale only looks at Proctor, deep in his attempt to define this man. Proctor grows more uneasy. ) I think it would be a small fault. ‘ (Proctor, Act Two).

Looking closely at Proctor’s character, it is possible to see that forgetting the commandment ‘Thou shalt not commit adultery’ was not just a memory lost; it was his conscience acting like he did by forgetting not to commit adultery. This makes he feel even worse towards Elizabeth, because it gives the impression that he had forgotten about this commandment which he broke. Proctor, once refused to charge Abigail and confess himself as lecher, even knowing it would save many people’s lives. ‘You will not judge me more, Elizabeth. I have good reason to think before I charge fraud on Abigail, and I will think on it.

Let you look to your own improvement before you go to judge you husband any more. I have forgot Abigail, and – (Proctor, Act Two). However on Act Three, Proctor changes to a stronger spirited man that just wants his wife back. On court, Proctor becomes a hero in the audience’s eyes, as he accepts to ruin his good name and reputation to save Elizabeth’s life. ‘In the proper place – where my beasts are bedded. On the last night of my joy, some eight months past. She used to serve in my house, sir. (He has to clamp his jaw to keep from weeping. ) A man may think God sleeps but God sees everything, I know it now.

I beg you, sir, I beg you – see her what she is. My wife, my dear good wife, took this girl soon after, sir, and put her out on the highroad. And being what she is, a lump of vanity, sir – (He is being overcome. ) Excellency, forgive me, forgive me. (Angrily against himself, he turns away from the governor for a moment. Then, as though to cry is his only means of speech left. ) She thinks to dance with me on my wife’s grave! And well she might, for I thought of her softly. God help me, I lusted, and there is a promise in such sweat. But it is a whore’s vengeance, and you must see it; I set myself entirely in your hands.

I know you must see it now. (Proctor, Act Three) Elizabeth and Proctor go through so much suffering as the play progresses, that on Act Four, they as a couple become a lot more united, and it is possible to see an improvement on the way they demonstrate more love and affection for each other. ‘You are a – marvel, Elizabeth. ‘ (Proctor, Act Four). These changes in their relationship go even further. Proctor, that previously had blamed Elizabeth for not forgiving him for his adultery, now does not forgive himself and refuses to confess like a saint. ‘I cannot mount the gibbet like a saint.

It is a fraud. I am not that man. (She is silent) My honesty is broke, Elizabeth; I am no good man. Nothing’s spoiled by giving them this lie that were not rotten long before. (Proctor, Act Four). And Elizabeth shows totally confidence and support on what Proctor will decide to do. She does not judge him, just stand by him. ‘Whatever you will do, it is a good man does it. (He turns his doubting, searching gaze upon her. ) I have read my heart this three month, John. (Pause. ) I have sins of my own to count. It needs a cold wife to prompt lechery. ‘ (Elizabeth, Act Four).

She even blames herself for Proctor’s affair with Abigail. ‘John, I counted myself so plain, so poorly made, no honest love could come to me! Suspicion kissed you when I did; I never knew how I should say my love. It were a cold house I kept! ‘ (Elizabeth, Act Four) The first move from Proctor trying to save Elizabeth was when he, desperate, convinced roughly Mary Warren to go to the Court and unmask the girls’ pretence. Impulsive and anxious to solve the situation, he behaved very aggressive with Marry Warren, that terrified of him, accepted to do his commands.

However, on Act Two he was brutal with Mary, on Act Three on the court; he was trying to be a kind and supportive figure that would stand by her. It gives the impression that he is using her, acting falsely to convince her. Abigail, afraid of being unmasked, led the girls to pretend to be witched by Mary. ‘Mary, please don’t hurt me! ‘ (Abigail, Act Three). Proctor noticing that Mary could any moment let him down, started to approach her saying that God would punish the liars. ‘God damn liars, Mary. ‘; ‘Mary, remember the angel Raphael – do that which is good and -‘ (Proctor, Act Three).

Mary, confused and emotionally weak, decides to give in to Abigail. She takes the opportunity revenge Proctor, for all the trouble he put her in, by turning the accusations on him. ‘I will not hang with you! I love God, I love God! ‘ (Mary, Act Three) Mary Warren is very offended and intimidated by Proctor. Previously, when she is asked if she knows about Proctor’s affair with Abigail, she confirms, trying to put some weight on Proctor’s back. Proctor, confirming the lecher crime and Elizabeth denying it just encourages him to fight for his beloved wife liberty.

He needs to prove Elizabeth’s innocence and Abigail’s guilty. ‘You are pulling Heaven down and raising up a whore. ‘ (Proctor, Act Three) Proctor was jailed, and after talking with Elizabeth, he decided to confess. Danforth and Parris were looking for someone popular in the crowd to confess, to encourage some of the prisoners to do the same. But for an encouragement, first was needed an evidence, so Proctor was asked a written confession with his signature. Proctor, refused to write the confession, saying that God had already saw it. There are two important things that really worries Proctor about a written confession.

If he confesses it, he will be spoiling names of people that refused to confess and had done nothing wrong, his friends. ‘I speak my own sins; I cannot judge another. I have no tongue for it. ‘; ‘I have three children – how may I teach them to walk like men in the world, and I sold my friends? ‘ (Proctor, Act Four). Also, he says that he cannot sign himself for lies. ‘Because it is my name! Because I cannot have another in my life! Because I lie and sign myself to lies! Because I am not worth the dust on the feet of them that hang! How may I live without my name? I have given you my soul; leave me my name!

‘ (Proctor, Act Four). At this point, the audience recognise Proctor’s strength as heroic act, by trying to save his friends good names, totally different from Proctor at the beginning of the play, that had discussed with Elizabeth about her judging him. Proctor decided to hang, but not to lose his’ and his friends’ good names. Miller, presented through Proctor’s character how a person can change from bad to good along the difficulties as it can happens in real life. In the beginning, Proctor that was such a selfish person, who did not care about anyone but himself, turned into an honest man. 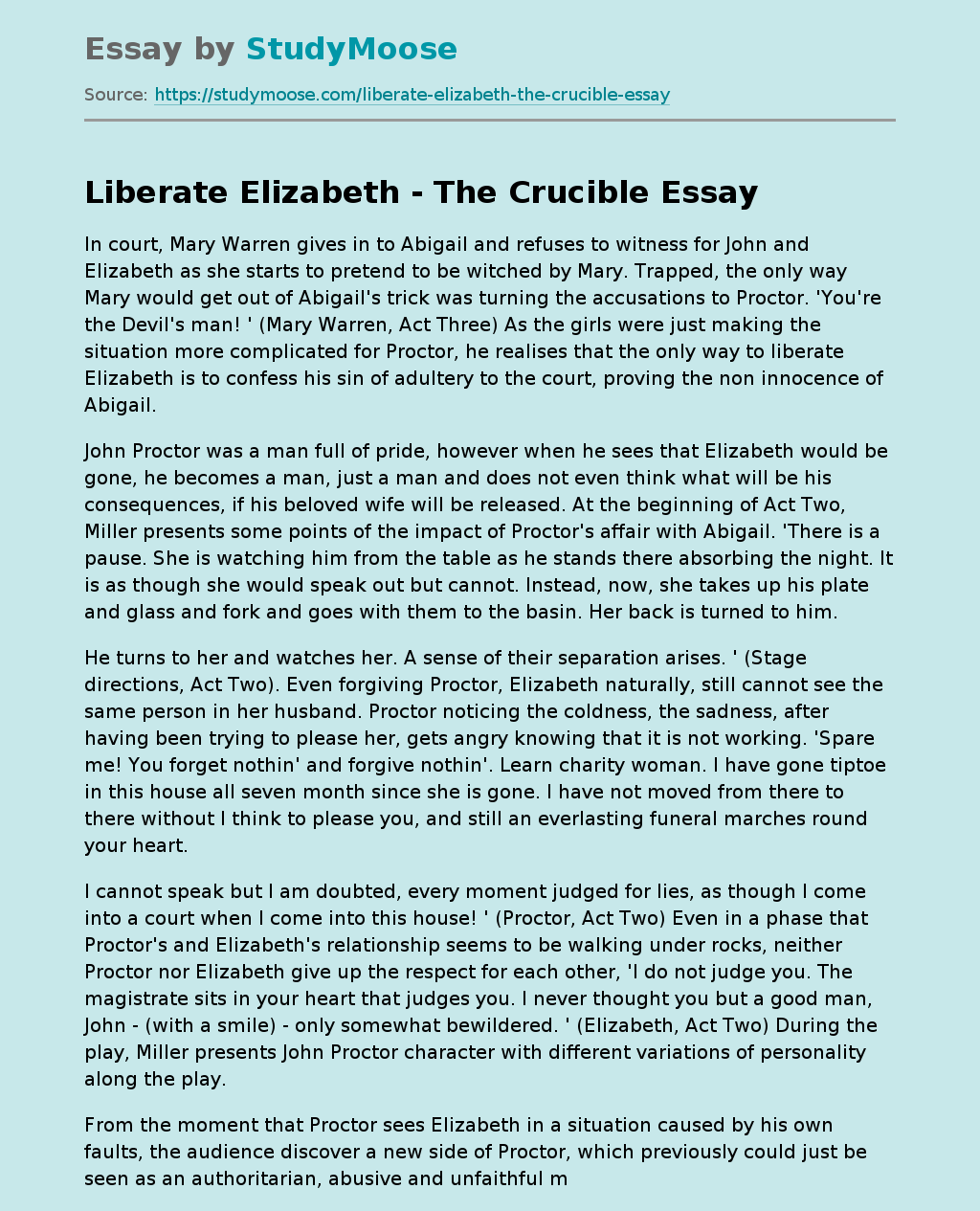