Two stories from the prose fiction unit included young men facing a similar journey and choice in life. In “A&P” by John Updike and “Araby” by James Joyce, Sammy and the protagonist both have romantic views of girls that they are infatuated with based upon appearances and material items. “A&P” is a static narration so that the reader can interpret the character’s experience of love, whereas “Araby” utilizes sombre vocabulary throughout the story to depict the outcome and reality of his love experience.

Don't use plagiarized sources. Get your custom essay on
“ Lesson from short story “Araby” ”
Get custom paper
NEW! smart matching with writer

A shared emotion both characters express is empathy for the girls when one was counseled by an adult for dressing inappropriately and the other was unable to go to an exotic bazaar. The young men try to offer the women something that they perceive would be valuable to the women. The importance of unfulfilled expectations that relate to glamour, social class, and disillusioned romance due to physical traits and why both characters experienced regret and disappointment after seeking love at young ages is the common message of both authors.

The main characters express a romantic interest in young women and describe them in a provocative way based on their outward appearance. Sammy notices that the leader of a group that enters the grocery store, Queenie, is dressed revealingly. “​With the straps pushed off, there was nothing between the top of the suit and the top of her head except just her, this clean bare plane of the top of her chest down from the shoulder bones like a dented sheet of metal tilted in the light.

I mean, it was more than pretty” (Updike). Sammy is sexually attracted to her body. The protagonist in “Araby” similarly describes Mangan’s sister in a sensual way. His “heart leaps” (Joyce) upon seeing “her figure defined by the light from the half-opened door” (Joyce). This physical description of her curves is in recognition of his sexuality. “Her dress swung as she moved her body, and the soft rope of her hair tossed from side to side” (Joyce). This sexual attraction to details such as her hair and the movement of her body is based merely upon a false ideology of love and attraction rather than knowing what love truly involves and being able to give it and receive it from the other person.

Other people initiate the conversation or the situation that then enables Sammy or the protagonist in “Araby” to become involved with the girls. For example, the protagonist does not communicate with Mangan’s sister, but can only “[quicken] [his] pace and [pass] her” (Joyce). Additionally, he “[has] never spoken to her, except for a few casual words” (Joyce). This indicates a lack of maturity and a false meaning of love that he has for her because he is unable to engage in conversation with her. He romanticizes and visualizes externally, but will not ever be able to understand what he can not see relating her body and physical attraction. Similarly, Sammy is only invoked to speak to the girls Queenie when his manager, Lengel, takes the initiative to enforce societal rules and procedures about dress. “Girls, this isn’t the beach” (Joyce). Prior to Lengel engaging the women in conversation, Sammy was only mentally fantasizing over them. Afterwards, however, he then speaks up and sacrifices himself by defending the girls. However, in his doing so, he actually objectifies them, rendering them as helpless, passive objects of desire who are not able to exonerate themselves. Due to his sexual desire he unknowingly reduces them to that status. Clearly, when he does indirectly engage in conversation with the girls it is actually harmful rather than pleasant. His not recognizing this also correlates to the way that he induces their attention.

Sammy wanted to impress the girls, whom he does not view as “sheep,” or blind conformists, and the protagonist in “Araby” wanted to buy a gift for Mangan’s sister in order to gain her love. The protagonist lives on a “blind street,” which symbolizes that he is oblivious and unable to see that he is only infatuated and that material gifts will not necessarily cause someone to love you. The protagonist sees her “ [turn] a silver bracelet round and round her wrist” and this leads him to say, “if I go, I will bring you something” (Joyce). He is observant that she is wearing glamorous jewelry and rationalizes that such items are something she loves so if he brings one then she will fall in love with him too. However, Joyce foreshadows the end of their nonexistent relationship when he says “fearing that the bazaar would be closed…” (Joyce). Indeed, when he arrives at the Araby “nearly all the stalls were closed and the greater part of the hall was in darkness. [He] recognized a silence like that which pervades a church after a service” (Joyce). In addition, he realizes that all of the available gifts are “porcelain vases” (Joyce). This purposely symbolizes their easily-breakable and fragile disillusioned romance. It also represents that he does not know what to offer her, as she had a different item on her wrist. The vases are also too expensive for him to afford so he will return nothing to her; nothing will solidify their relationship. Without the giving of gifts, the verisimilitude of the relationship is brought to light as being an unfulfilled expectation. Once he sees the porcelain vases he “remembers with difficulty why [he] had come” (Joyce).

In “A&P,” Sammy wants to impress the girls by defending them, and he quits his job to confirm his interest in the girls and in their choice of ethics, but they actually ignore him. He lacks a full understanding of what he is doing, although he believes it is the right thing to do. It correlates to the theme of individualism. Just as he thinks that morals and ethics should be determined by the self, he makes an unwise decision in choosing to be unemployed, which was motivated by his personal and idealized ethics. The third-party involvement with both characters involvement with the girls is an indicator that it is a disillusioned romance. The characters do not realize that youthful tendencies and desires such as sex, love, and exotic fantasies are actually non-existing chances.

From the diction in “A&P” we can derive that the girls are upper class whereas Sammy is from a lower economic status. Therefore, he would not have had a chance with the summer vacationers anyways (which is why they ignore him). ​Through his youthful imagination, he believes he could have a chance with them by showing that he supports their actions, but the dénouement of the story is when he leaves the store and sees that they have vacated the property. “I look around for my girls, but they’re gone, of course” (Updike). Through the appeal of the girls’ rebellion, and his own unwise actions, Sammy was penalized, although it was self-induced, but the wealthier girls were not. Rebellion has roots in economic wealth and power. Joyce was illustrating that the glitz and glamour affiliated with anyone should be approached with caution, and that one should not sacrifice themself at the expense for “love.” Sammy, being inexperienced and young, attempts to rebel like the girls, but unlike them, faces the consequences of his choices. The message that both authors conveyed is that through their infatuation they failed to recognize that these opportunities for love or sexual fulfillments were far-reaching and actually self-detrimental. The character in “Araby” promised to bring the young woman a gift from the bazaar. However, he arrived too late to have a chance to find that “meaningful” token of his emotions, albeit, an affordable one, so he failed to meet his goal. Yet, the reward he sought, namely, Mangan’s sister’s love, would not have been granted either, as the young woman was a member of the convent and was prohibited to marry. Subsequently, both characters recognized that their youthful way of approaching love because of the appealing attraction and glamour was wrong.

After the climax, both characters experience an epiphany. Sammy realizes that he fooled himself into believing that he is able to understand the inner lives of all the customers based on their actions and appearances, but when he himself does something that he does not quite understand he sees that his ​own​ inner self is still a mystery to him. Although he does recognize his attraction to girls, he realizes that he should not judge others’ situations in life because he does not understand them. His failed expectations of romance allows him to see that his blithe, arrogant, and youthful way of looking at the world was wrong. Sammy also learns that the world is hard on anyone who resists its rules and norms. Furthermore, Joyce is making a broader point: that what most people see as “love” usually springs from vanity or the innate desire for the approval of others. The main character in “Araby” had a similar epiphany of vanity. He sees himself “as a creature driven and derided by vanity; and [his] eyes burned with anguish and anger” (Joyce). Grandiose acts of love in life and literature, such as the narrator’s attempted gift-buying at the Araby bazaar, are often portrayed as selfless but, like the narrator’s actions, may in fact be motivated by selfish motives. Both men have experienced growth. ​Sammy understands the world better. The narrator in “Araby” was guided without any adult guidance and was fully influenced by his misconceptions. 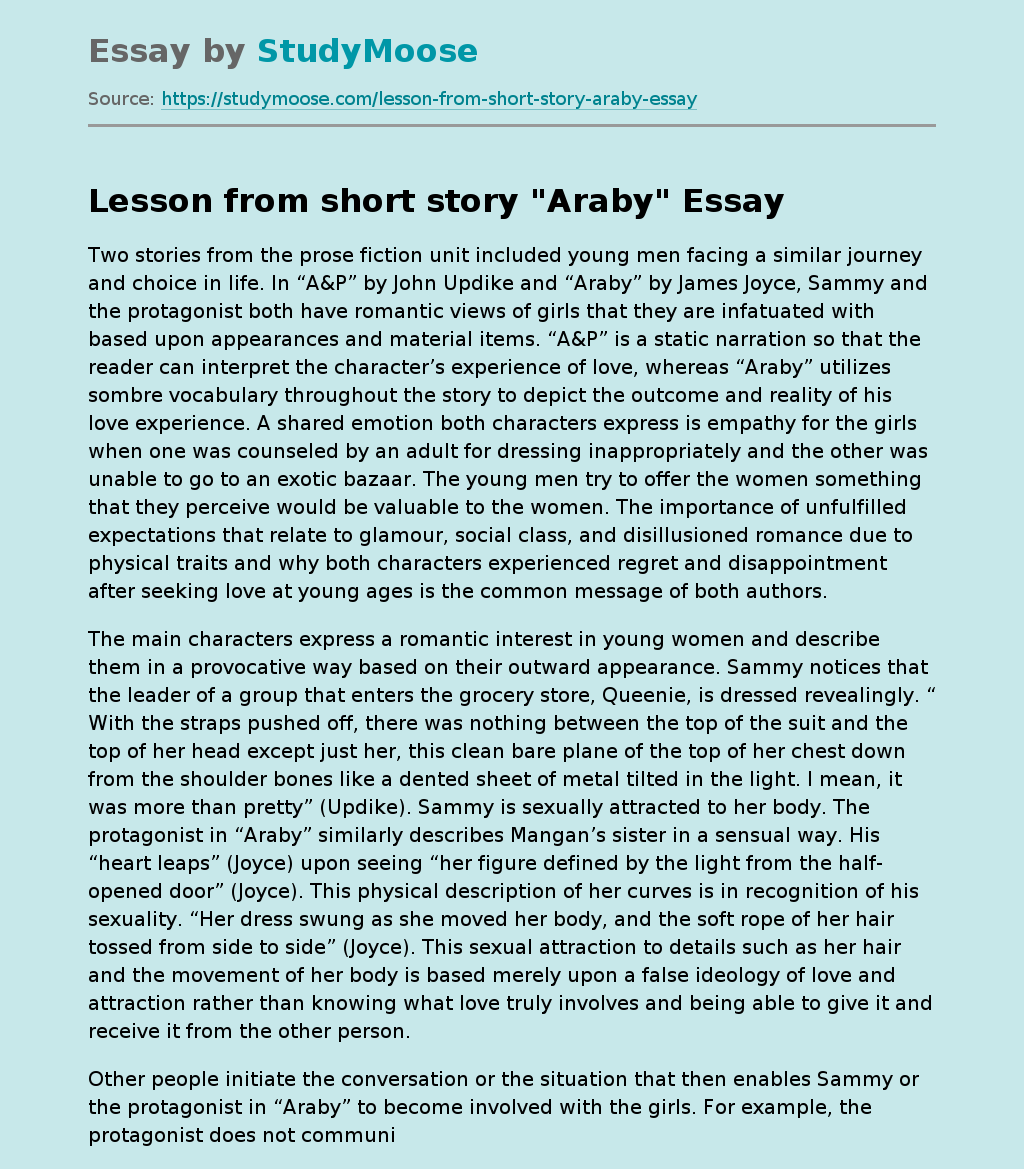