I Know Why the Caged Birds Sing

This is a story of a black woman named Maya, who had to go through very tough times, severe insults and emotional derailment as a child and grows out to be a strong individual, thanks to a few influential persons, she meets in her childhood and growing years. The story begins around the timeline of 1930s, with narration of Maya Angelou’s experience of being rejected by her parents after their divorce. Her insecurity, gradually builds up during her stay in California in 1940s.

Don't use plagiarized sources. Get your custom essay on
“  I Know Why the Caged Birds Sing ”
Get custom paper
NEW! smart matching with writer

With many ups and downs, she finds herself becoming stronger, at retaliating against racism.

The divorce between Maya’s parents happens, when she is just three years. Maya and her elder brother Bailey Johnson Jr are then transported to stay with their paternal grandmother named Annie Henderson, who is otherwise called as Momma by Maya and Bailey. She runs a store in Stamps, Arkansas and stays with a thirty year old son Willie Johnson, this is the place that gives Maya her identity and gets her out of depressing and insecure thoughts, before she finally finds solace in her stepfather’s company.

Willie Johnson proves to be a protector of these children during their stay with Momma.

Maya believes strongly, that she is ugly and a rejected child, while Bailey is quite good at handling negative criticism and is compassionate towards her young sister, who bears with insults, from white people when she is unable to complete poem reciting in church. She runs away, wetting herself, crying and laughing at herself, thus venting the ridiculing thoughts that surrounded her when she began singing.

She finds solace in isolating herself, in the events of insults and traumatic thoughts attacking her from all sides. She is a curious child, but withdraws herself at the slightest of provocation or insult, while Bailey is intelligent and matured for his age. He protects himself from torments and insults, by anesthetizing himself until the traumatic moment or time has passed away. Their paternal grandmother instills these children with Christian values, for the initial, five years they stay with her.

All these five years, Maya is observant of racism against black, which is very deep-rooted. She also takes time to observe cotton pickers who are journeying from and to work field. When Maya turns eight, her father Big Bailey Johnson, who she does not remember at all, comes to Stamps. He is known for possessing flashy accessories and good command over English, which gives him vanity and some form of handsomeness to his personality. He arrives at Stamps, with an intention to take their children to their Mother’s place.

Big Bailey Johnson is not very concerned about his children, nor is he connected to them or cares for them. He simply takes the children to their mother Vivian Baxter, who is residing at St. Louis. Vivian is a qualified nurse but, earns money from gambling and working at gambling parlors. She has strong streak for being independent and is also known for her wild ways and live-in relationships. She is not a very attentive a mother, but treats her children well. Mr. Freeman is her live-in boyfriend at St. Louis, who finds Maya, in need of physical affection and love. He takes advantage of her weakness of being self-consciousness in the company of people, and molests her. Later on, he rapes her. A court battle ensues, in the midst of which, he is murdered violently. It is expected that criminal associates of Maya’s family, who were underground, committed this murder.

All this, has a very negative effect on Maya and she is broken emotionally. She feels she is to be blamed for murder of Mr. Freeman, as she had denied, in the court of Law that he had molested her before raping her. She starts believing that she is a devil’s mouthpiece and stops speaking with everybody. But she does communicate with her elder brother Bailey. Maya’s mother’s family assumes that this is a usual traumatic phase and keeps quiet for it to pass. But even after long time, Maya does not speak, making them frustrated and perceive her to be disrespecting their love and care towards her. All this while, she keeps talking to Bailey.

Maya finds it relieving to return to Momma at Stamps, but Bailey is very regretful of this decision. Although Momma never seemed to be emotional with these children, she has a good rapport with them and manages to make Maya talk. She introduces Mrs. Bertha Flowers to Maya. Mrs. Bertha Flowers is a black aristocrat with many good collections of books on literature. She manages to divert Maya’s attention to literature and soon Maya is idolizing her and pouring over literature books. She takes special interest in Maya and makes her read these books loud, to regain her lost self-confidence, thus helping Maya feel special.

The years spent at Stamps build a strong character and give strength to Maya. She begins to understand the strength her community can display and also finds that, it is very fragile. An event such as church revival, where the priest teaches against hypocrisy the whites practice, gives some spiritual strength to Maya. But sadly, all this dissipates when the crowd gathered for revival walks home past honky-tonk party. Maya is then enthralled by the match commentary where Joe Louis, who is a heavyweight champion, fighting a match to defend his title against a White opponent. She is fervently praying for him to win it.

Maya is then employed at Mrs. Viola Cullinan, a white woman, who is good at hiding her racist feelings for Black people, with her gentleness. While working at her place, Maya meets Glory who works as a cook at Mrs. Cullinan’s place. Mrs. Cullinan has a habit of renaming the Black servants hired and Glory never objects to it. She finds Glory to be the opposite of herself. Maya is very adamant that she be called with her given name and not ‘Mary’, as Mrs. Cullinan prefers to call her. When Mrs. Cullinan does not pay heed, it enrages her and she shows her retaliation by breaking, fine china.

When Maya is in her Eighth Grade, she gets to hear two speakers who influence her greatly. One is Mr. Edward Donleavy, who thinks black students, either end up as athletes or as servant, which devastates Maya’s belief of strength in her community. The other speaker influences her very positively. Henry Reed, who is valedictorian for graduating class, reaffirms her belief and renews her interest in black poets and Black Orators. This is where Maya learns to retains her pride for the community, to evolve as a strong individual.

She then has many depressing incidents to bear with, people like Dr. Lincoln. He is a dentist, and insults Maya when Momma takes her to him for rotten tooth. He says he would be happy to place his hands into a dog’s mouth than hers. More devastating incident that tests Maya’s resolve is when Bailey finds that White men seem to be satisfied, when they see a dead black man rotting on the streets. Momma is then worried about the future of her children and saves enough money, to send them to Vivian, who has moved on to California after a brief stint in Los Angeles.

By the time Maya turned thirteen; Momma has taken Maya and Bailey to Los Angeles and then moved along to Oakland in California. Here, Vivian marries Daddy Clidell. Maya is disinterested in talking to him. But soon, she finds him to be a real father, she craved to have. He is a right mix of emotion and strength and finds joy in spending time with Maya. She enjoys learning, to play poker with her father, and is at home when they move to San Francisco. Here she encounters Miss Kirwin, the teacher who does not ill-treat Maya for her color and shows equal concern for everybody. Maya finds Clidell and his conman friends teaching new things and starts viewing racism in a different perspective, even that, it can be used for their own advantage. Clidell is not highly educated, but that does not stop him from being a successful businessman.

Maya then spends a summer with her biological father Big Bailey, who is in Los Angeles with his live-in girlfriend Dolores Stockland. She is very hostile, jealous and proud by nature, but Maya, however decides to be compassionate towards her, which shows one of her strong individual characteristics, which is being merciful. She then runs away, to stay with a group of homeless teenagers for a month, after a fight with Dolores.

Finally she returns to San Francisco with stronger resolve and assurance. She begins her fight against racism. During the war, she takes up a job as a streetcar conductor, against all policies for hiring Black people, at a tender age of fifteen. When she turns sixteen, she decides to hide her pregnancy from her mother and Clidell for about eight months. Graduation from high school instills new confidence in Maya, and so does her son’s arrival. She is a proud, independent and compassionate mother of a newborn son.

I Know Why the Caged Birds Sing. (2020, Jun 02). Retrieved from https://studymoose.com/know-caged-birds-sing-new-essay?post 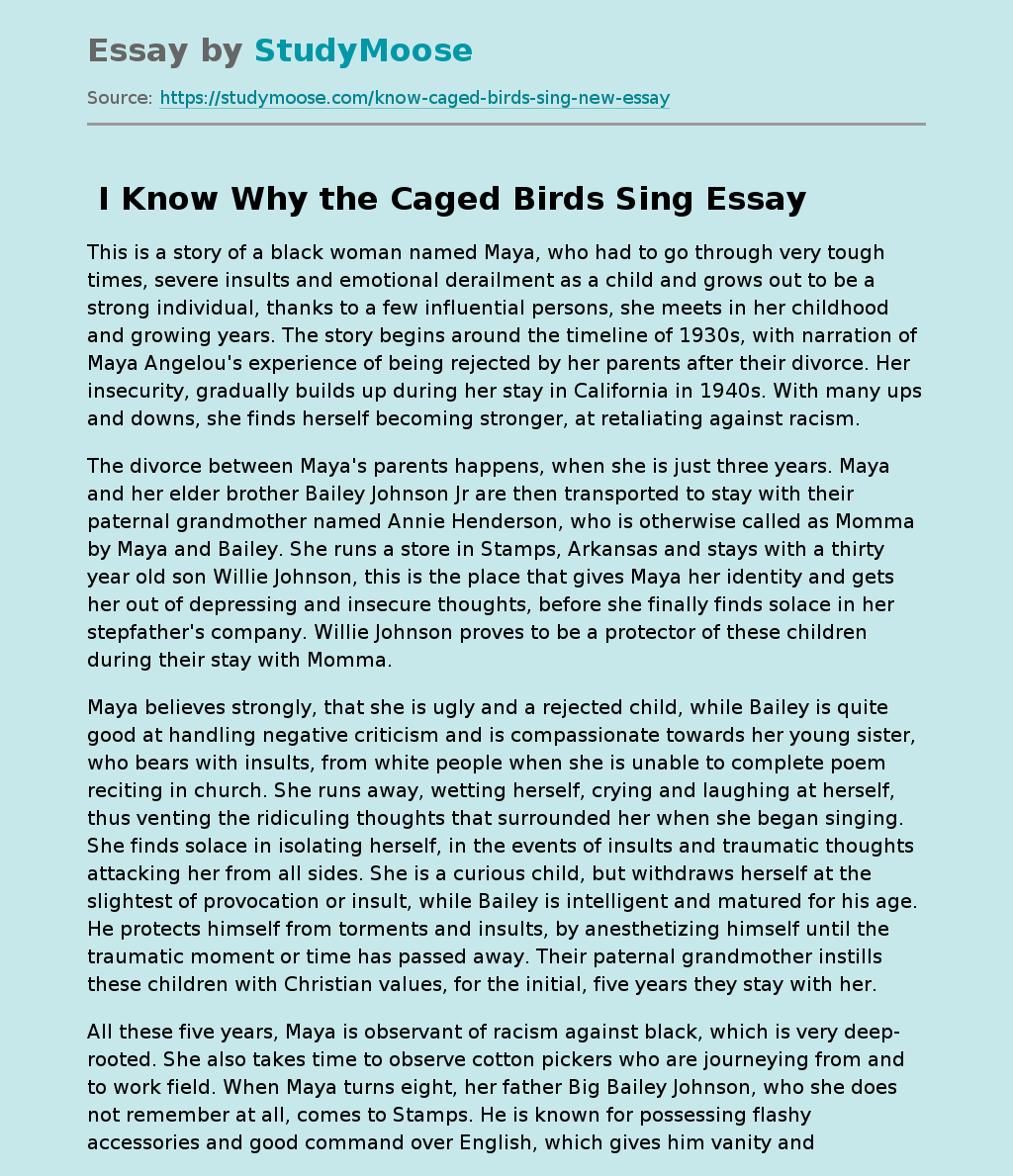