The "Powhitetrash" Children of "I Know Why the Caged Bird Sings"

In the first six chapters of “I Know Why The Caged Birds Sing”, many events happen. One event in particular was the poor white children, also known as the “powhitetrash” children, disrespected Momma. When Marguerite was ten-years-old, three “powhitetrash” children approached the Store. As they walked closer, Momma told her to head inside. The children mocked Momma by imitating all her body gestures and stance. They also referred to Momma by her first name, which was very disrespectful considering the fact that she was an elder.

Turn in your highest-quality paper
Get a qualified writer to help you with
“ The “Powhitetrash” Children of “I Know Why the Caged Bird Sings” ”
Get high-quality paper
NEW! AI matching with writer

Marguerite showed more anger towards the situation than Momma did. Marguerite wanted Momma to fight back. Even though the poor white children continued to make fun of Momma, she said nothing. The only thing she did was hum gospel hymns. When Momma entered the Store after the whole incident, Marguerite was still furious. After a few moments, she finally realized what Momma was doing.

Instead of fighting back with anger, she fought back with kindness.

Momma’s reaction towards the three white children shows that there are other ways to fight back racism. She refused to show any sign of anger because she felt no need to feel out of place. The children’s attempt in trying to threaten Momma’s authority failed because she showed them that she was much better and stronger than them. Despite the disrespect she received, she was still respectful towards the “powhitetrash” children. She set an example for her grandchildren, Bailey and Marguerite.

This experience shows how racism was back in the 1930s.

Even though slavery was abolished in the late 1800s, there was still racism and segregation in the following decades ahead. In the South, blacks were not considered people to the whites. The whites saw them more as animals so, they mistreated them. They felt as if they had more authority than the blacks. The white children also thought they could disrespect blacks, no matter if they were another child or elder.

The "Powhitetrash" Children of "I Know Why the Caged Bird Sings". (2016, Sep 14). Retrieved from https://studymoose.com/the-powhitetrash-children-of-i-know-why-the-caged-bird-sings-essay 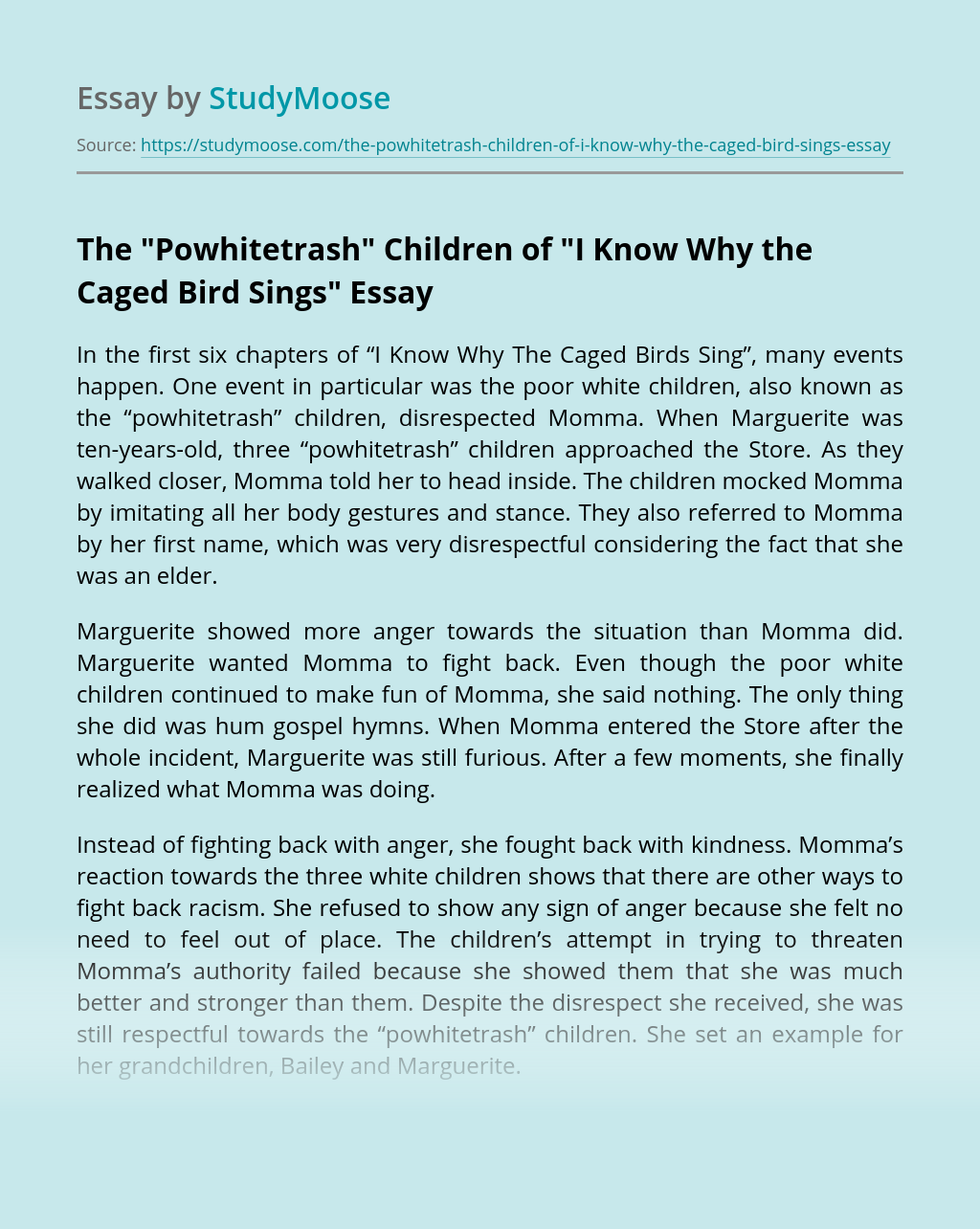 Turn in your highest-quality paper
Get a qualified writer to help you with
“ The “Powhitetrash” Children of “I Know Why the Caged Bird Sings” ”
Get high-quality paper
Helping students since 2015
Stay Safe, Stay Original