Similar to real life, characters in books and plays have significant flaws. The way those flaws play a part in the character’s life is what sets them apart. The misguided actions and flaws of a character eventually lead to their demise. Shakespeare’s tragedy King Lear is a detailed description of the consequences of one man’s poor decisions. The man is Lear, King of England, whose decision to divide his kingdom based on which of his children most love him greatly alter his life and the lives of those around him.

Get a verified writer to help you with King Lear: Characters

Shakespeare shows us how one flaw in an otherwise normal person can lead to their ultimate demise.

According to critic Northrop Frye, “Tragic heroes are so much the highest points in their human landscape that they seem the inevitable conductors of the power about them, great trees more likely to be struck by lightning that a clump of grass. Conductors may of course be instruments as well as victims of the divisive lightning.

” Based on Frye’s criticism about tragic heroes, the character King Lear is the perfect example. In Frye’s words “Tragic heroes are so much the highest points in their human landscape,” refers to the tragic hero being the one that stands out amongst the other characters.

Lear is a high point in the human landscape just because he is the king in the very beginning making him far more important than the other characters. From the very first act the readers can see blindness he has towards love and loyalty. He chooses to divide the kingdom based on love and when he is oblivious to the real love of Cordelia and Kent he banishes them.

Throughout the play, and from act one, Lear is surrounded by, a compliment of people that love him dearly, people who would gladly sacrifice their lives for him. He turns on most, if not every single one of these people, and when he really starts to lose sanity, things only go from bad to worse. Therefore Lear’s status and tragic flaw set him apart from the rest of the characters making him the tragic hero that Frye describes. As stated by Frye “they seem the inevitable conductors of the power about them,” is criticizing the inevitability of events.

The characters unknowingly put themselves in a situation where they have nowhere to go but down. Lear exemplifies this exact quality of unintentionally put himself in danger, when he wished to divide the kingdom based on love. Lear did not think before deciding to split the kingdom into three equal parts. Since he didn’t do he brought strife between the daughters. Also the fact that who he thought loved him the most turned out to be two daughters that just had greed for power and fortune, adds to the argument. Lear started out with good intentions, but when he chooses love as a way to divide the kingdom.

He was inevitable set up to failure. Lear was a foolish old man, who thought the idea of dividing his kingdom up among his three daughters according to who said she loved him most would flatter his ego. However he did not know how events would play out in the end. Lear’s inevitability of failure is what causes him to be the perfect example of a tragic hero. Finally Frye comments on the way characters inadvertently cause the suffering of others and himself. His comments are “great trees [are] more likely to be struck by lightning than a clump of grass.

Conductors may of course by instruments as well as victims of the divisive lightning. ” The mistakes of Lear are not just the suffering of one man but the suffering of everyone down the chain. Lear’s decisions have caused Kent and Cordelia to say things Lear does not want to hear, getting them banished. Another person to be hurt by Lear is Gloucester, who loses his status and eyes. Lear is the instrument in that he causes other people suffering. However he is also a victim to his actions and the great tragedy that is the lightning.

All of the pain that Lear suffered is traced back to the single most important error that he made; the choice to give up his throne. This one mistake has proven to have massive effects upon Lear and the lives of those around him eventually killing almost all of those who were involved. Since Lear is the cause of so much suffering, he fits Frys’e description of a tragic hero well. Lear’s extremely arrogant pride supplies him the strength and confidence to rule kingdom, but at the same time blinds him from recognizing true love and loyalty. That is the tragic “flaw” which eventually costs him both his ingdom and his beloved daughter, the only one of the three who loved him as a father, and the only daughter who cared about a jealous, foolish, and impulsive old man.

According to Frye’s description of a tragic hero Lear fits the description perfectly. The tragic demeanor of the play and the tragic hero adds to the travesty at the end. Everyone ends up dying without salvation or redemption. The bitterness, sadness, and reality of the human psyche that is contained throughout this work demonstrate its tragic nature best, however. Shakespeare puts a mess across about thinking before you act because the people around you will be affected.

Get a verified writer to help you with King Lear: Characters 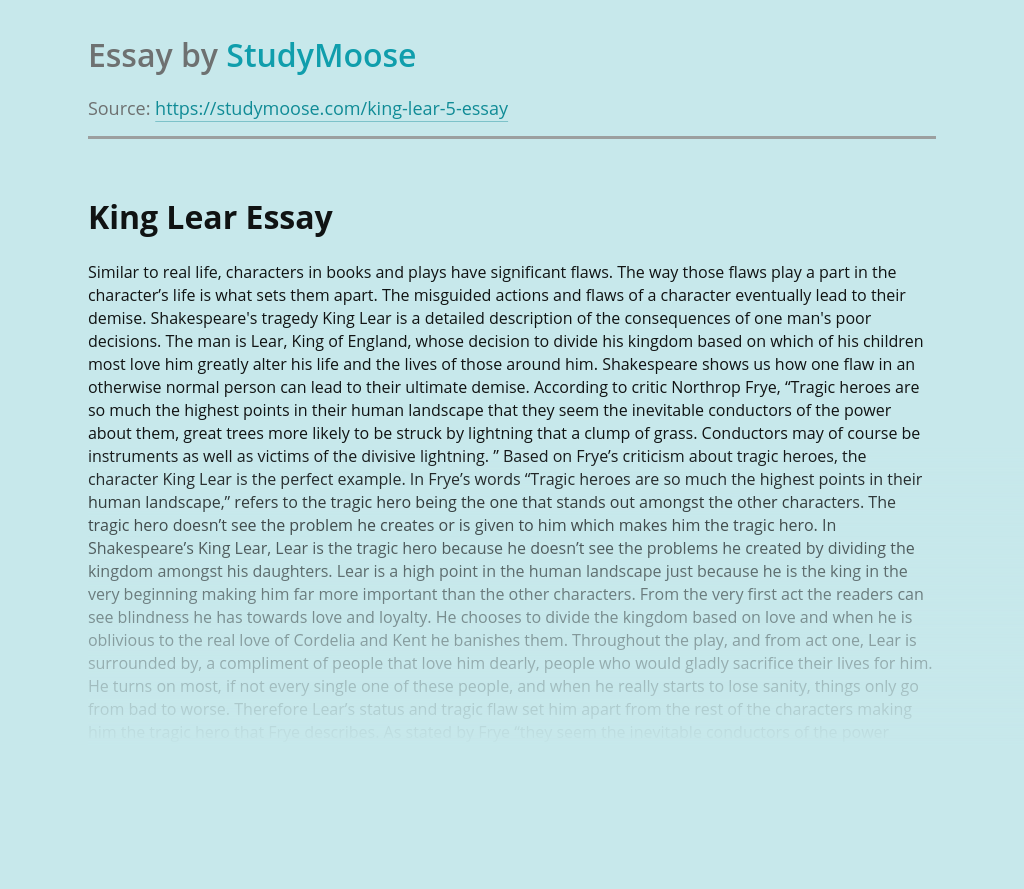 “Character is destiny” is a dominant theme that often appears in Shakespearean tragedy. In the play, King Lear this concept is portrayed through the characters of King Lear, Gloucester, and Edmund. The characteristics and the roles that each of the characters have within the society of the play determine the treatment that they receive from...

Tragedy is an essential aspect of many of Shakespeare’s most critically acclaimed plays. A.C. Bradley, one of the foremost thinkers of Shakespeare’s works, created a theory that explored these tragic dramas. The concept of Good and Evil become essential to humanity, and as a result, figure prominently in a balance of what he refers to...

King Lear and Gloucester are similar to an extent of being tragic heroes, because they both experience the traditional features of a classic tragedy. Both characters go through the features of hubris, hamartia and culminates with anagnorisis. Shakespeare employs the double plot in ‘King Lear’, the only Shakespearean tragedy to employ two similar plots which...

William Shakespeare creates dynamic and complex characters in his tragic play, Othello. Othello, Iago, Desdemona, and Emilia each display a tragic flaw. Shakespeare’s subtle descriptions of the characters allow for varying interpretations of each character. The tragic flaws can truly alter perspectives as the story transitions. A tragic flaw can begin as a positive character...

Considered by some to be one of the finest tragedies ever written, Shakespeare’s Othello tells the story of one man’s fall from happiness to utter despair. This is achieved by Othello’s fatal flaws – his jealousy and pride. Othello’s own fatal flaws lead him to his demise not Iago’s manipulation. This view point is supported...

"No Good Friday" by Athol Fugard

John Proctor Is a Good Man

Many actions dignify the traits of a tragic hero, but only few stand out. In the tragedy The Crucible by Arthur Miller, a tragic hero dies a good man when brought to trial over nothing more than child’s play and dishonesty. John Proctor is an honest, upright, and blunt-spoken man because he fought for what...

Shakespeare with his two great tragedies: Macbeth and King Lear

Abstract The present study is an interpretation of two great tragedies, Macbeth and King Lear, written by William Shakespeare who is considered the greatest writer of tragedies. In this study, an attempt has been made to explore the two most profound tragedies, King Lear and its immediate successor, Macbeth from a different point of view....