The Story of an Hour by Kate Chopin is a short yet complex story, describing Mrs Mallard’s feelings. It focuses on the unfolding emotional state of Mrs Mallard after the news of her husbands death, and has overflowing symbolism and imagery. It is an impressive literary piece that touches the readers’ feelings and mind and allows the reader to have a connection to Mrs Mallard’s emotional process. Although the story is short, it is complete with each word carrying deep sense and meaning.

Don’t waste time
Get a verified expert to help you with Kate Chopin Analytical Essay – the Story of an Hour
Hire verified expert
$35.80 for a 2-page paper

It is written in the 19th century, a time that had highly restrictive gender roles that forbade women to live as they saw fit.

Mrs Mallard experiences something not everyone during this time has the luck to have; the happiness of freedom that the reader only understands at the end of the story. The author unfolds Mrs Mallards feelings in three stages; firstly moving quickly to grief, then to a sense of newfound freedom, and finally to despair over the loss of that freedom.

To create the story, Chopin uses an abundance of literary elements, including imagery, personification, and similes, and also makes use of the social expectations of her time.

In the beginning of the story the reader is told that Mrs Mallard suffers from a heart condition, and news of her husband’s death is brought to her “as gently as possible” (158). Mrs Mallard’s sister, Josephine, and her husbands friend Richards break the news, believing Mrs Mallard would be upset and that the news could make her condition worsen.

During the 19th century, most women when in Mrs Mallard’s situation would wait until they were in private before breaking their composure. Mrs Mallard however, “wept at once, with sudden, wild abandonment” (158).

The reader expects Mrs Mallard to be upset at the news of her husbands death, and worries that with her heart trouble the sad news may worsen her condition. However, her reaction to the news is just the first emotional response to the news, without deep comprehension of what has happened and how it will change her life. Chopin shows us how Mrs Mallard, little by little, comes to realise it and what helps her to understand it. After composing herself Mrs Mallard goes to her room and “there stood, facing the open window, a comfortable, roomy armchair.

Into this she sank” (158). Reading this readers realise something turns the story to a more positive and reassuring way. How does Chopin create this effect? Chopin uses imagery and creates the comfortable setting so that the reader can become more in tune with Mrs Mallards situation and feelings. By allowing thereader to see two things “a comfortable, roomy armchair” which symbolises security and comfort in spite of Mr Mallards death, and “the open window” that symbolises a connection to the world and life continuing.

In the fifth paragraph Chopin emphasises the feelings of comfort and security even more, and creates more details and fresh elements for the new and positive turn in the story. The reader is told that Mrs Mallard, through the window, can see “tops of trees that were all aquiver with the new spring life,” (158) and that “the delicious breath of rain was in the air. In the street bellow a peddler was crying his wares. ” (158). These parts, also an example of imagery by setting the scene outside of the house, show the reader that Mrs Mallard is reconnecting with the world.

Sitting in that armchair she starts to hear sounds and smell scents that she didn’t before; things we take for granted and only appreciate when we’re happy. Did she really not notice these everyday occurrences until after her husband’s death? In the next paragraph Chopin gives us more details of these changes, emphasizing it but not telling the reader why she didn’t notice until now. Careful readers, however, understand the deep sense of the words about the “patches of blue sky showing here and there through the clouds that had met and piled one above the other” (158).

These words aren’t there just to take up space. They are details that make the reader feel the growth of Mrs Mallard’s excitement and let us understand that the blue sky is a symbol of the freedom and future life for Mrs Mallard. In paragraph eight, Chopin begins to use personification as well as imagery. Mrs Mallard “young, with a fair, calm face” (158) is sitting in the armchair with a “dull stare in her eyes” (158) which “indicated of intelligent thought” (158).

Reading this, the reader can form an idea of what Mrs Mallard looks like, and we understand that there’s something going on in Mrs Mallards head, something changing everything in her mind. Mrs Mallard is still struggling to figure it out but “she felt it, creeping out of the sky, reaching towards her through the sounds, the scents, the color that filled the air”. From this we understand that she is beginning to realise it, and her soul is beginning to fill with happiness of freedom, which is in all the sounds, smells and things she sees.

For one moment, however, she is somewhat afraid of feeling happy about her freedom and “she was striving to beat it back with her will” (159). This shows that Mrs Mallard is a “product” of her time, and is striving to feel what is socially accepted. She realizes that society would determine her thoughts of freedom inappropriate, but she can’t stop herself from feeling that way. However, “she knew that she would weep again when she saw the kind, tender hands folded in death” (159), but it’s just a reaction, one that society expects her to have, and one that many have when dealing with the death of someone they know.

Chopin makes it quite clear that Mr Mallard loved Mrs Mallard, “the face that had never looked save with love upon her” (159). Mrs Mallards own feelings are also described, and it’s clear that she doesn’t share her husbands feelings “she loved him – sometimes. Often she did not” (159). This kind of direct and simple language is used to describe things that Mrs Mallard isn’t emotional about, thus the language would indicate, as much as the actual words do, that Mrs Mallard didn’t have strong feelings for her husband.

After all, what can compare to “a long procession of years that would belong to her absolutely” (159). This is where Chopin finally gives a reason as to why Mrs Mallard feels this way about her husbands death. “There would be no one to live for her during these coming years: she would live for herself. There would be no powerful will bending hers in that blind persistence with which men and women believe they have a right to impose” (159). This shows the reader a picture of Mrs Mallards family life.

She was unhappy with her husband because she couldn’t have her own opinion and she couldn’t show her own will to do something, which is why she is happy to be free of her marriage. Back in the 19th century, society would not accept a divorced woman, but it would accept widows. Mrs Mallard is estatic, realising that she was now free from her husband, and still has a place in society. “Free, body and soul free! ” (159). Reading these words the reader shares with Mrs Mallard her feelings, excitement and hopes.

At this point the readers have fixated mostly on Mrs Mallard and the sudden reintroduction of Josephine, brings the reader back to reality. Josephine, kneeling outside the door, now looks ridiculous to the reader as she implores Mrs Mallard with her words of “open the door – you will make yourself ill” (159). Because Mrs. Mallard, who is a woman, who had numerous years under her husband’s will, finally gets an absolutely freedom, a miraculous freedom, which she even didn’t hope to get the day before, but her sister is far from understanding it, and is in fact worrying that her sister is grief stricken.

Mrs Mallard eventually gives in to her sisters worried begging, and expecting “spring days, and summer days, and all sorts of days that would be her own” (159), leaves the room “a goddess of Victory” (159). Here Chopin uses a simile to describe how calm and happy Mrs Mallard is now, free of all the negatives of her marriage. This point, at first look, seems to be the highest culminating moment of the whole story. And this is where Chopin’s creativity truly comes into play. Chopin prepared the main culmination right at the end, in the three final paragraphs.

Mrs Mallards husband opens “the front door with a latchkey” (160). He enters “a little travel-stained, composedly carrying his gripsack and umbrella” (160). He is carrying it “composedly”, because although his name is on the list of those who died, he is unaware of the train accident reported at the beginning of the story. Adding to the irony is “Josephine’s piercing cry” and “Richards’ quick motion to screen him from the view of his wife” (160). It is said that Mrs Mallard dies “of a joy that kills” (160).

These words carry the complete opposite meaning than they read. The reader understands that the doctors are wrong, thinking that she dies from happiness of seeing her husband alive. Rather, the reader feels that she dies from total disappointment of the loss of the freedom she so recently gained and experienced, even just for an hour. This hour, spent in a comfortable armchair in front of an open window, made her feel happy and free, and made her understand the sense of her being, and it was the only real hour of her life.

In The Story of an Hour, Kate Chopin used many subtle literary elements to create depth in her story. By using imagery she allows the reader to get a sense of the characters surroundings while adding to the story. In using similes Chopin can express the characters feelings in different ways, instead of just telling the reader how Mrs Mallard feels. With her use of personification, Chopin allows the reader to better understand what Mrs Mallard looked like, while keeping her physique vague and without going into too much detail.

By creating a sudden and a strong ironic twist at the end, Chopin allows the story to contradict itself in ways the reader wouldn’t expect. In the beginning, the readers are worried that Mrs Mallard’s heart condition will worsen at the news of her husbands death, but in the end it’s disappointment of the fact that he doesn’t actually die that causes her heart to fail.

The main theme of the story, longing for freedom and how it felt to finally feel free, is expressed in a way that is both entertaining and allowed the reader to feel connected to the character. By having Mrs Mallard die of a “heart disease”, it symbolises that Mrs Mallard felt of marriage as a “disease” and that it was constraining.

The main point of the story is that freedom is a prize possession in Mrs Mallards life and that to loose it again so quickly after gaining it is more than she can bare. Bibliography: Charters, Ann “The Story and Its Writer: An Introduction to Short Fiction, Seventh Edition (2009 MLA Update)”, Boston, Bedford/St. Martin’s, 2007.

Kate Chopin Analytical Essay - the Story of an Hour. (2016, Sep 15). Retrieved from http://studymoose.com/kate-chopin-analytical-essay-the-story-of-an-hour-essay 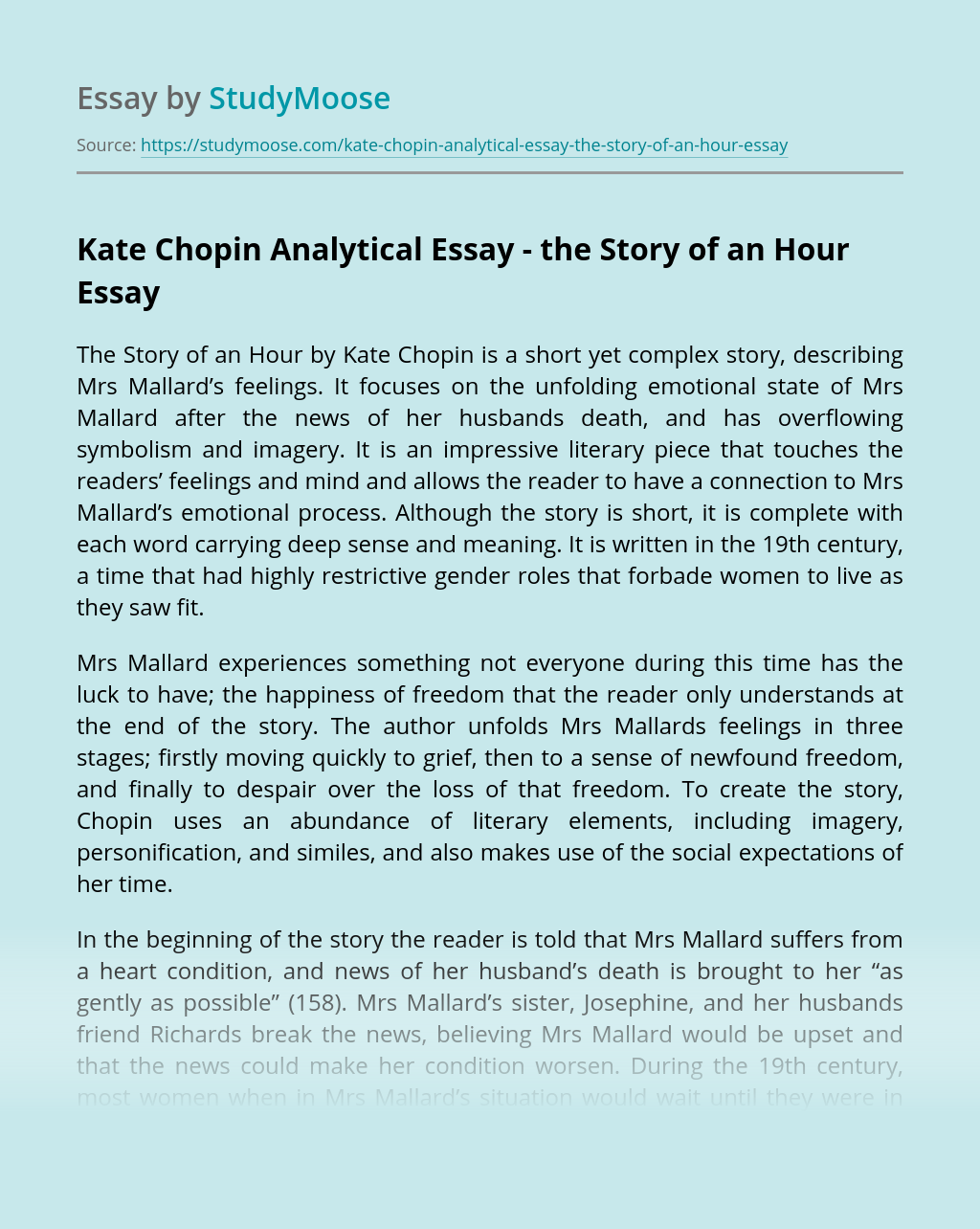 Don’t waste time
Get a verified expert to help you with Kate Chopin Analytical Essay – the Story of an Hour
Hire verified expert
$35.80 for a 2-page paper
Stay Safe, Stay Original