The 1970s and 1980s have witnessed a major renewal of interest in Kant’s aesthetics. Paul Guyer, Donald Crawford, Francis Coleman, Eva Schaper, Theodore Uehling, Salim Kemal, and, and Mary McCloskey have all written books explicitly devoted to the topic; Guyer and Ted Coen have edited a collection of relevant essays; and Antony Savile and Mary Mothersill have written widely praised general works which involve much discussion of Kant’s aesthetic theory. These approaches, however, have concentrated almost exclusively on Kant’s treatment of beauty and art.

Don't use plagiarized sources. Get your custom essay on
“ Kant’s Sublime ”
Get custom paper
NEW! smart matching with writer

His extensive discussion of the sublime, in contrast, has received scant attention. This neglect is a general characteristic of the reception of Kant’s aesthetics in the Anglo-American and German traditions of philosophy in the twentieth century. The reasons behind it have been usefully summarized by Paul Guyer. He suggests that Kant’s theory of the sublime does not fit in well with the general framework of The Critique of Judgment-and in particular with the account of aesthetic experience.

Indeed, he goes so far as to say that even if there is historical interest in Kant’s discussion of the sublime.

It is safe to assume that his analysis of this particular aesthetic merit will not be of much interest to modern sensibilities, and thus that most of what we can or will learn from Kant must come from his discussion of judgments of beauty. (Derrida, 1987) To these worries must be appended two other problems. First, Kant’s discussion of the sublime is formidably difficult; and second, the term “sublime” itself seems to be so variably in ordinary and critical discourse as to make any philosophical definition of it seem unwarrantably stipulative.

In relation to this last objection, while the sublime is indeed used very variably in ordinary and critical discourse, it seems to operate nevertheless, within a broad twofold framework. On the one hand, it is used descriptively to denote vast or powerful objects, or ones that induce extreme states of emotion in us; on the other hand, it is used evaluative in relation to artworks of extraordinarily high quality. If we could define the sublime in a way that could highlight important connections between the two sets of usages, we would have a definition with claim to more than merely stipulative validity.

In fact, it is a renewed confidence in the possibility of defining the sublime that in part lies at the heart of an astonishing transformation of sensibility that has taken place in the last ten years or so. While philosophers in the analytic tradition of philosophy have found new significance in Kant’s treatment of beauty and art, philosophers from other traditions and, indeed, writers in a host of other disciplines have asserted the cultural centrality of the sublime-and, in particular, Kant’s version of it. Amongst the enormous literature here, one might cite the following examples.

Jacques Derrida and Paul de Man have offered extended (if difficult) analysis of Kant’s theory of the sublime; Neil Hertz (amongst others) has related sublimity to psychoanalysis; Thomas Weiskel and Louis Marvich written books on Romanticism and Mallarme’s prose works (respectively) using Weiskel’s reconstruction of Kant’s theory as the core of their methodology; Jean-Francois Lyotard has published a number of extremely influential articles which assign Kant’s theory the most central role in defining modernism and postmodernism in art and culture generally.

Whereas the concept of beauty seems outmoded-passe even- in relation to the current practices of criticism in the arts, sublimity has suddenly become-fashionable. Kant’s first attempt to articulate a theory of the sublime is found in his pre-critical Observations on the Feeling of the Beautiful and the Sublime, published in 1764.

In the years immediately preceding this work, Kant had been much concerned with the relationship between feeling and morality, and Werkmeister is probably right in asserting that it was his indecision on the score which led him ‘to take a closer look at the nature of feelings’ Kant’s method in the Observations is primarily descriptive and is conducted, as he puts it, ‘more with the eyes of an observer than of a philosopher’. It is as modes of such “finer feeling” that we experience the sublime and the beautiful.

Again Kant plies us with examples. Mountains with peaks above the clouds, descriptions of raging storms, Milton’s portrayal of hell, all arouse ‘enjoyment but with horror’; whereas flower-strewn meadows, valleys with winding brooks, or descriptions of Elysium occasion a “joyous and smiling’ (Maverick, 1986). Thus for Kant, while moral virtue presupposes a feeling of affection for humanity, this feeling only takes on its distinctively moral character when it issues in impartial principles of conduct, rather than ad hoc sympathetic responses.

It is, indeed, this very subduing of immediate impulse through principle, which Kant finds sublime. As he puts it, ‘as soon as this feeling of affection for humanity has arisen to its proper universality it has become sublime, but also colder. ’ This brings us to the end of Kant’s main philosophical points. The remainder of the Observations is for the most part concerned with the application of these points to question such as the nature of humane character-types, the relation between sexes, and the characters of different nations.

First, it is possible that Kant was at least indirectly familiar with Burke’s theory through an extended review of the inquiry written by Mendelssohn in 1758. However, the differences between the two theories are quite striking. This is not due simply to Burke taking a systematic, and Kant taking an informal, approach; rather it hinges upon important philosophical differences. Burke, for instance, holds that the sublime is essentially a passion of modified terror or pain and pertains, thereby, to the instinct for self-preservation.

While he takes the subjective aspect of this passion as his starting point, he ultimately construes it as the casual effect of quite specific properties in objects. Kant, in contrast, asserts his independence from this view in the very first sentence of the Observations. It is not the propertiesof objects so much as the subjective capacity for feeling, which determines the nature of our pleasurable or displeasurable responses. This allows him to find a greater diversity both in the employment of our feeling of the sublime, and in the objects and situations, which can occasion it (Man, 1984).

Understanding and virtue, as well as the more obvious ‘sublime’ phenomena such as raging storms are examples of these. Indeed, for Kant ‘sublime’ can be a predicate ascribed not simply to the effects akin to terror of other persons and things upon us, but to actions undertaken by ourselves, out of, say friendship or virtue-and which involve no risk to our physical well-being. This marks a crucial, and (from the point of Kant’s mature theory) decisive, advance upon Burke.

The most, indeed, that Schillp is prepared to admit is that ‘Kant agrees with his British and French tutors upon the importance for the moral life of feeling and of the emotional elements in general’. In relation to Kant’s remark about feeling not being ‘all of a piece’ (leaving aside the fact that Schillp quotes it out of context), there is nothing in it which would count against the possibility of there being a distinct moral sense. A theorist such as Hutcheson does not hold that all feeling is moral, but rather that there are several varieties of feeling (or internal ‘senses’) of which the moral is one.

If Schillp has directly compared Kant and Hutcheson’s views he would have actually found them to be almost identical. For example (as we have seen), when Kant talks about the feeling of the sublime, and the feeling for morality, he uses the term ‘feeling’ to denote, not our particular state of quiet wonder, or affection for humanity (or whatever), but rather our disposition to experience such states. These determinations to be pleased with any forms, or idea which occur to our observation, are what the author [i. e.

Hutcheson himself] chooses to call senses, distinguishing them from the powers which commonly go by that name, by calling our power of perceiving the beauty of regularity, order, harmony, an internal senses. And the determination to be pleased with the contemplation of those affections, actions, or characters of rational agents which we call virtuous is what he marks by the name of moral sense (Neil Hertz, 1978). Kant’s treatment of the sublime and the beautiful as feelings in the Observations parallels, and is probably influenced by, Hutcheson’s notion of an ‘internal sense’.

Surprisingly, the one point which Schillp does see Kant as having in common with Hutcheson et al. (i. e. ‘the importance for the moral life of feeling and of the emotional life in general’) is one which is in fact somewhat at odds with the new direction which Kant’s thought is beginning to take in the Observations. For, as we have seen, while Kant sees a feeling of affection for humanity as a presupposition of virtue, he construes ‘true virtue’ as a special employment of this feeling-namely acting in accordance with universal principles irrespective of our spontaneous emotional impulses.

The beginning of such an answer are present in Kant’s text, in so far as all the objects and phenomena which he sees as giving rise to the sublime are ones which exercise powers of non-coercive physical and/or intellectual authority over us. The deep precipice has the potential to destroy us; true virtue asserts itself as an obligation and duty transcending personal inclination; the pyramid manifests the superiority of collective physical endeavor, and creative genius, over the mundane individual’s talents. Kant, in other words, implicitly construes the sublime as occasioned by powers which transcend the self, in some specifiable way.

What unites these phenomenological disparate states of enjoyment with horror, quiet wonder, and a sense of the splendid is that they constitute a mode of reverence. Yet this invites the question of why our reverence for that which has authority over us should be in any sense a source of pleasure-rather than of mere reverence as such. The case of virtue which transcends personal inclination provides an important clue. Here is something which, in its orientation towards the universal, exceeds our normal sensuous mode of being, but which is not-as a precipice or pyramid is-something to external to us (Weiskel, 1976). 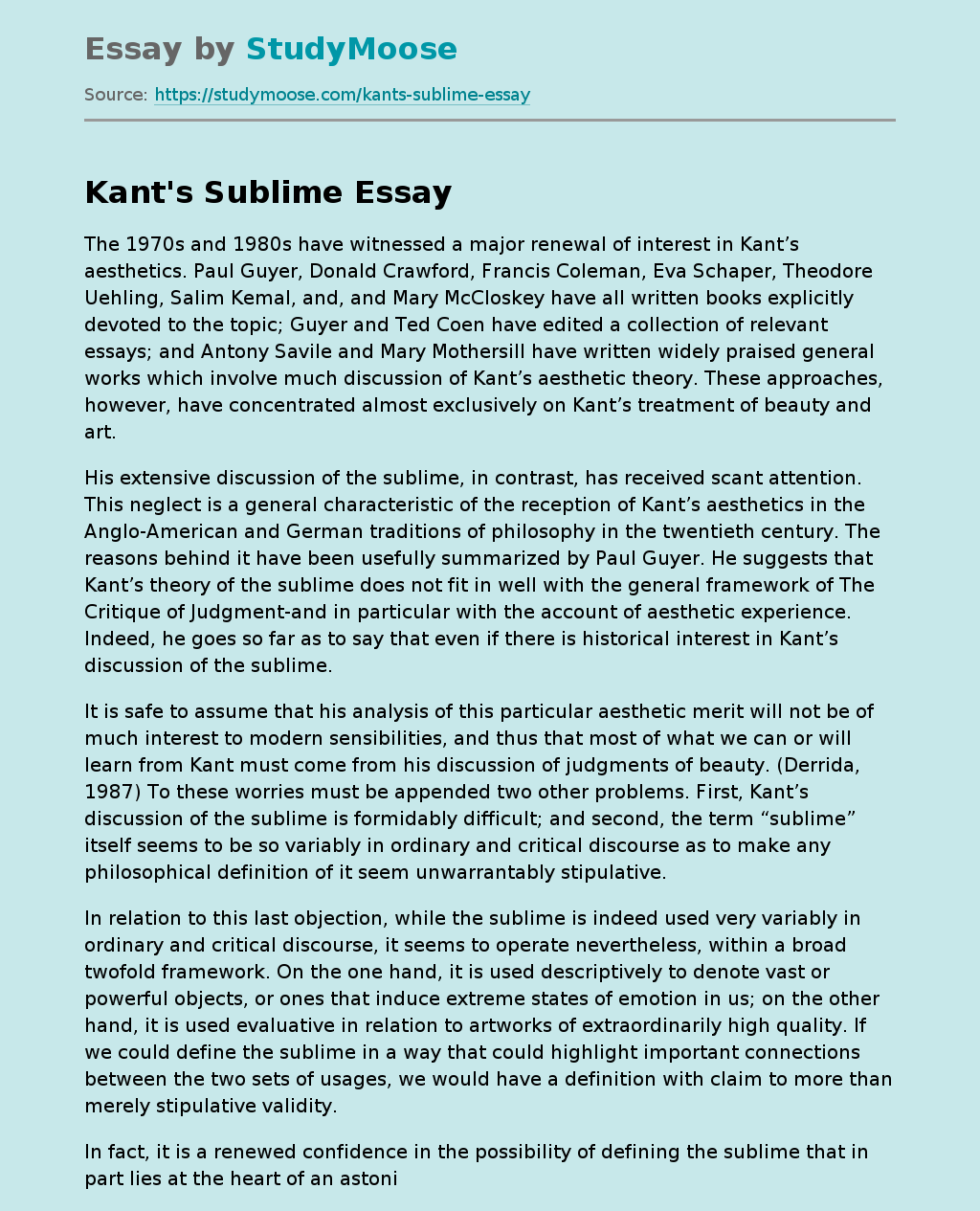