Did Kaiser Wilhelm II at any time exercise real power?

When Kaiser Wilhelm I died on the 9th of March 1888, he and his close Chancellor: Otto von Bismarck, had over seen the unification of Germany through Prussia, and had established the German Empire as a known power throughout the world. Kaiser Wilhelm I was succeeded by his only son Frederick III, however this arrangement was to last only ninety-nine days as a result of Frederick III’s incurable cancer of the Larynx which was directly responsible for his death on the 15th of June 18881.

Don't use plagiarized sources. Get your custom essay on
“ Did Kaiser Wilhelm II at any time exercise real power? ”
Get custom paper
NEW! smart matching with writer

Despite great the expectations of the German public surrounding Frederick III’s rule, his short reign did not allow for the liberal Kaiser’s potential to be fulfilled. Upon his death on the 15th of June 1888, his son and predecessor Kaiser Wilhelm II took control of an unstable Germany in a tenacious Europe2.

Kaiser Wilhelm II was born in January 1859 and became the German Emperor at the age of 29. The German population were hugely expectant on the young Kaiser, moreso on foreign policy and Germany’s place within world politics, following the death of his father, though this did not fit well with his personality or his aims3.

Kaiser Wilhelm II has been described as “impressionable, volitile and highly unstable.”4 He had a fascination with his army, and perhaps more importantly his navy. He took a highly militaristic and expansionist approach to both his foreign policy and national security. Whilst his career was plagued with political blunders, internal rifts within his party, and at the end of it the involvement of Germany in the First World War, he did for several periods in his role of Kaiser, exercise real power of his party and constituants.

It is fair to say that in the first two years following his coronation, he did not exercise any real power. His self-assertiveness and belief in “the divine right”5 caused a direct personality conflict with his then Chancellor, Otto von Bismarck, on a number of German policies. Wilhelm I, Kaiser Wilhelm II’s Grandad had a good relationship with Bismarck, and left him with much of the administrative duties of the Emperor, and valued his input on many issues whilst in office. The new Kaiser was less keen to have such a dominant figure in his party, and eager to exercise his own personal rule. Although the Kaiser could simply have gone above Bismarck’s head when first coming to power, Bismarck had allies and supporters in the Reichstag and the Bundesrat, and so any obvious public disputes could have caused a mutiny within parliament. The discontent between the Kaiser and his “Iron Chancellor” reached a climax in 1889 when the pair disagreed over the precautions to take in response of a miner’s strike. Kaiser Wilhelm proposed a meeting with the striking workers to discuss wages, working hours and conditions whilst Bismarck was pressing for a set of anti-socialist laws to be passed by the Reichstag. After stating that the army should be sent in to crush the uprising, Wilhelm replied that he “wasn’t willing to open his reign with a bloody campaign against his subjects”6. With such a contrast in attitudes, it is not suprising that in 1890, Bismarck handed the Kaiser his resignation. If we are to believe Norman Rich, that the Kaiser “forced Bismarck to resign”7, then this is evidence of the young Wilhelm exercising not just real power, but great power early in his reign, forcing the nation’s most respected politician out of his party so that he could rule as he wished. On the other hand, the idea that Bismarck resigned as he “no longer had the support of his Kaiser”8 implies that it wasn’t the Kaiser exercising real power over the party that resulted in Bismarck’s resignation, but more his unwillingness to work with his party. In this light, the Kaiser is made to appear to have established an autocratic rule over Germany, he is still excerising real power by sticking to his own way of ruling, and not allowing key decisions to be made for him as he sat there acting merely as a figurehead. Whatever view is supported concering Bismarck’s departure, it becomes Kaiser Wilhelm II’s first act of power since becoming Emperor of Germany. 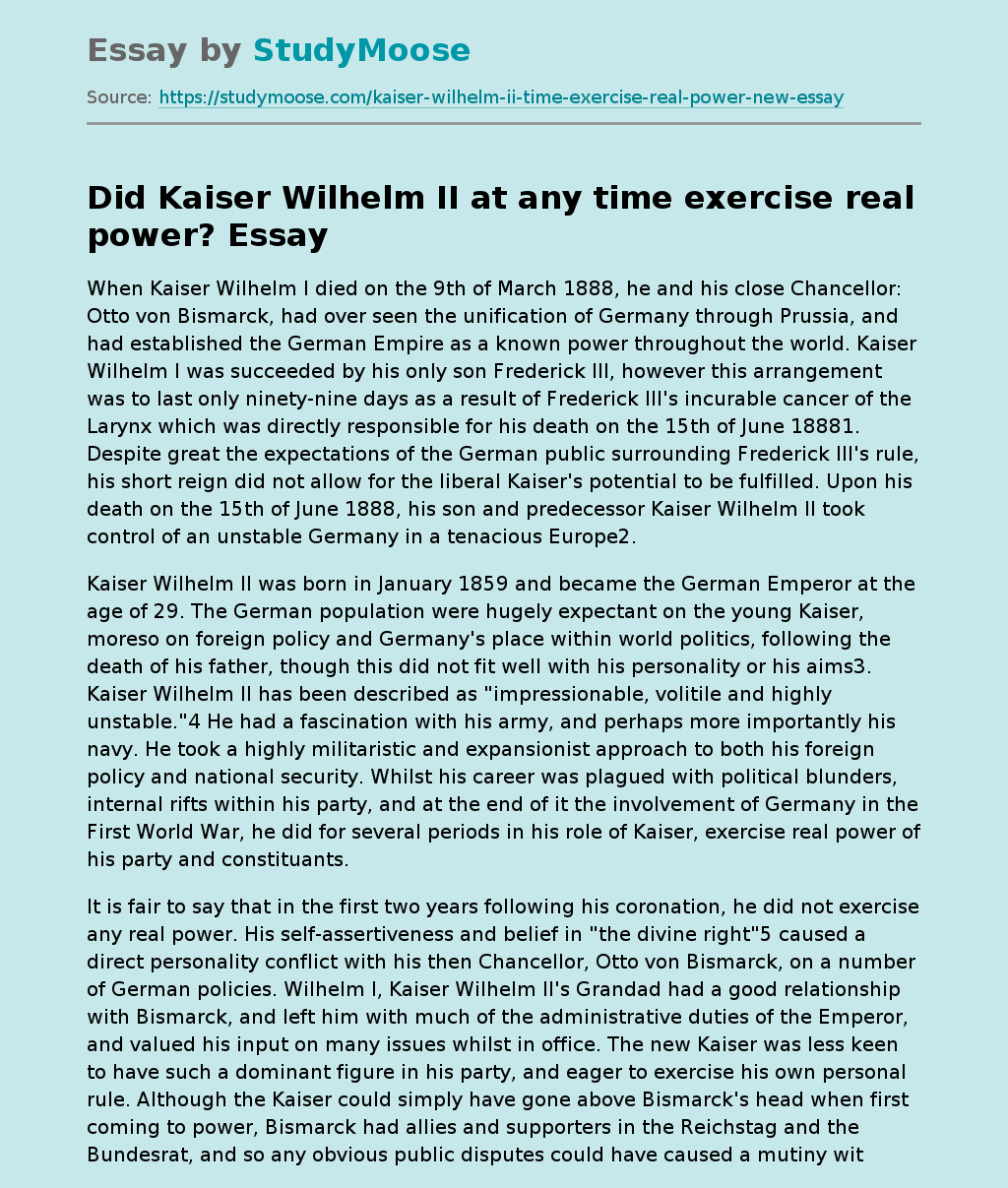