The movie John wick is an action thriller film that is full of twists and turns worth reviewing. John Wick “Keanu Reeves” resigns a killer’s job to tend his dying wife who is sickening with cancer. After her death, John is left alone with a little puppy by the name Daisy to take care of and his lovely car which becomes an obsession to Losef “Allen” who persuades John to sell it to him but he refuses.

Losef sends some hit men to get the car from John’s home at night where they kill Daisy and take the car with them. John embarks on a revenge journey his aim being to kill Losef for killing his puppy Daisy, destroying his home and taking his car. Below is an analysis of the movie based on the vengeance journey of John wick the grounds on which the film is based (John Wick, 2014).

John previously had a quest of pulling out of an assassin’s job with an aim of reforming to live a straight life, but the nature pulls him back to action.

To revenge on Losef means to take down all the assassin bodyguards and the criminal organization belonging to Viggo “Michael Nyqvist” Losef’s father, but that doesn’t trouble John. He goes to an extent of humorously commenting that his revenge intentions worry Viggo more than it worries him. Indeed, it bothers Viggo more because when he learns that Losef messed up with John, he reflects on several hits that he had sent John on and all were successful (John Wick, 2014).

Chad the director of the film has constructed an exclusively distinctive world for John which is self-contained. This gives emphasis on how refined and stylish John Wick is. The evidence can be draw from the exclusive and cozy high-end hotel that accommodates assassins for lease. Those are intentional bonuses on John Wicks’ life that the director uses to bring an old-school tactic, in almost half of the film, instead of using the fast-cutting tactics that are used today. This presents intricately choreographed collections in which every development of the film is clearly defined and it credibly fits the moment (John Wick, 2014).

Outside the superb violence that the picture shows, the directors have a sense for creativity with the help of cinematographer Jonathan who aides in delivering an unpromising saga city of netherworld suspense. The early scenes are black and white, from the gloomy, rainy skies during John’s wife’s funeral service and his head-to-toe costumes. As John gets back to his old criminal life, the scenes start to glow may be symbolizing the brighter days in John’s life when he used to do what he enjoyed doing, that is assassinating (John Wick, 2014).

When the movie advances, it grows deadening in action. John Wick becomes more compelling and artistically amplified and it clearly depicts the world today where almost everyone is embarking on the journey of merciless revenge when something they value is taken away. The film is set in New York but John and the other assassins seem to be living in their little world in New York. They have their own money which they expend on goods and amenities. They frequent a cozy hotel downtown which acts like a safe haven for killers. This is an amazing exclusive life which is a total contrast of the non-stop mess presented in the movie through dominating killings (John Wick, 2014).

The film is no hesitations a depiction of the actual life circumstances of the day. The gun silencers that are used make the right noises, unlike other films where directors believe that silencers get rid of all noise. The gun reloads that are done happen frequently at applicable times and they thus make a contribution to the choreography. Similarly, as an assassin should do, John takes head-shots on every attack. This is a true representation of what a hit-man does as opposed to exaggeration of hitting other body parts first and a head-shot the last hit (John Wick, 2014).

Action movies ought not to depend on character or story depth. In its place, they have to hinge on action. In the movie “John wick”, what John lacks in personality advancement and contextual story is compensated for in action. Most of the film is composed of scenes centering on John devastating his adversaries with a flawless objective and unmistakably controlled training. John might seem small, but a real destroyer when in action as presented in the film with close to the true life occurrences. He doesn’t just maneuver his way through but he does so with a determination. When he finally eliminates Losef’s guards, it’s a moment of mission accomplished when they face each other. The expectations of the end scene are frustrated when John stubs Losef and leaves him to die instead of eliminating him completely at the spot (John Wick, 2014).

In conclusion, the film “John Wick” might not win many awards, but it’s a true reflection of what is happening in the world today (John Wick, 2014). The producers do not try to be perfect in their work but rather, they want the viewer to feel the effect of presenting reality in the film without exaggeration. This makes it all good to beat the times in watching action films. 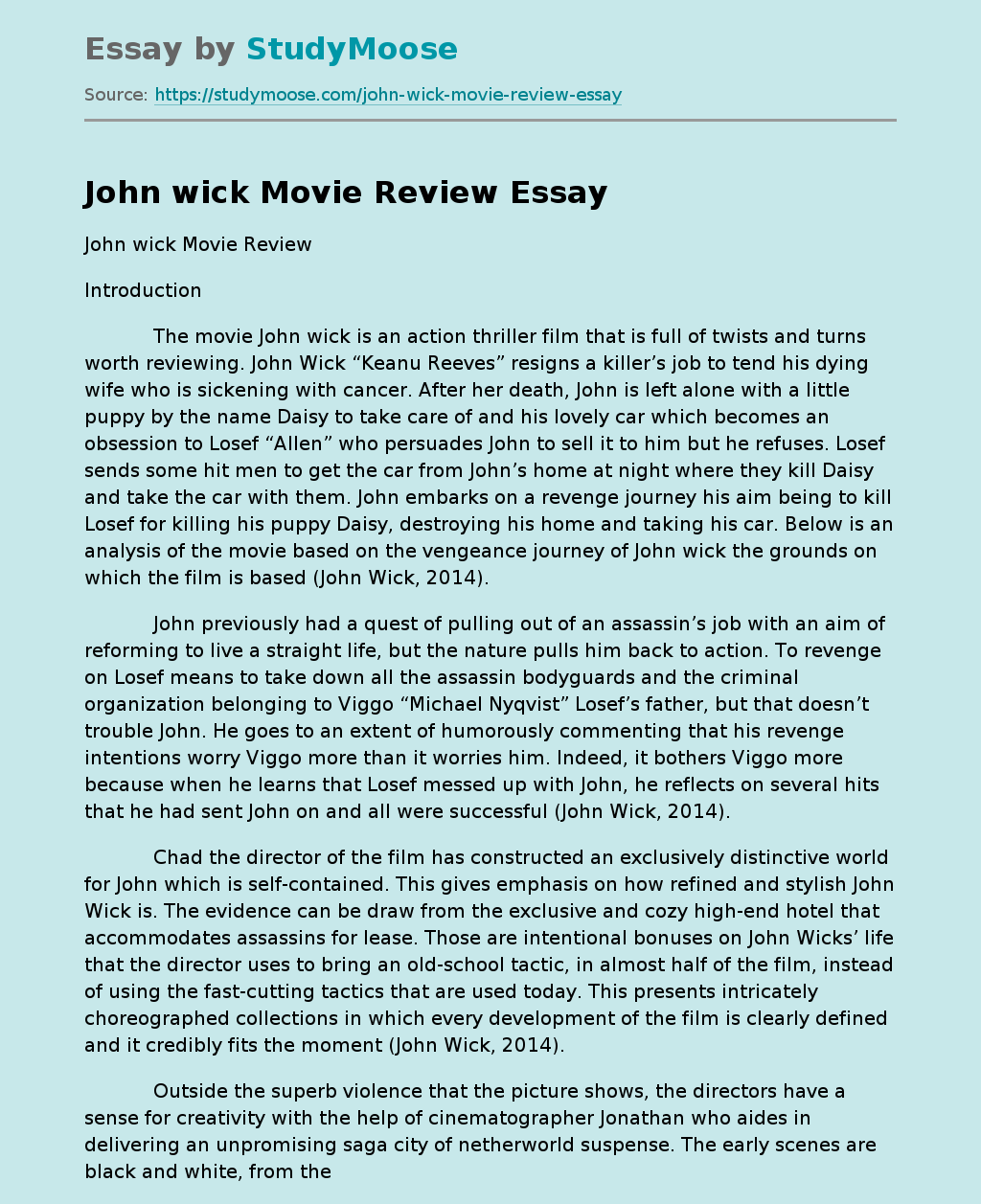