The Scarlet Letter and The Crucible both have main characters that can relate to each other even though they are in two different stories. Arthur Dimmesdale, one of the main characters of The Scarlet Letter, is a respected reverend in society that commits a horrendous and sinful act, adultery, with a woman named Hester Prynne. John Proctor, a main character from The Crucible, commits adultery as well with his servant, Abigail Williams. These two characters, aside from the others that have a role in the story, are perhaps the best comparison due to their similarities in flaws and differences in which the way they act.

Don't use plagiarized sources. Get your custom essay on
“ John Proctor vs. Arthur Dimmesdale ”
Get custom paper
NEW! smart matching with writer

They are both different, because John holds a different personality compared to Arthur in how John is not as accepting to the truth as Arthur is. Also, Dimmesdale does not have a passion or desire to threaten anyone. Both of them are similar though, because they broke the moral and ethics of what they learned religiously, and committed adultery as a result.

Although Proctor and Dimmesdale have many differences, they can relate in some ways with one another.

Proctor and Dimmesdale are different from one another, because John cannot accept the truth and reality in the world unlike Dimmesdale. John could not accept the fact that his wife knew about his affair with Abigail and told his wife, Elizabeth, to mind her own business. The quote, “”‘You will not judge me more, Elizabeth. I have good reason to think before I charge fraud on Abigail, and I will think on it.

Let you look to your own improvement before you go to judge your husband anymore. I have forgot Abigail, and …” (Miller, 52), exemplifies how Proctor cannot accept the truth and fear of what the reality actually is.

Dimmesdale though, is very accepting to the truth on how he is judged not only by everyone, but by god as well. The statement, “‘The judgment of God is on me,’ answered the conscience- stricken priest. ‘It is too mighty for me to struggle with!’.” (Hawthorne, 177) This quote symbolizes how Dimmesdale has accepted that judgment will be everywhere due to his actions of adultery and has learned to bear the truth. Besides their difference of their view on the “truth” they have other differences as well.

Also, they are different because John threatens Abigail a lot in the play, but Arthur does not look to seek threaten anyone. Proctor, for instance, made a threat to Abigail by implying, “You will tell the court you are blind to spirits; you cannot see them any more, and you will never cry witchery again, or I will make you famous for the whore you are!” (Miller, 143). He threatened her so that she will confess and let his wife get out of jail a free woman. Arthur in turn though, does not threaten anyone throughout the whole story despite the many threats Chillingworth has made against him. Chillingworth implied, “The intellect of Roger Chillingworth had now a sufficiently plain path before it.

It was not, indeed, precisely that which he had laid out for himself to tread. Calm, gentle, passionless, as he appeared, there was yet, we fear, a quiet depth of malice, hitherto latent, but active now, in this unfortunate old man, which led him to imagine a more intimate revenge than any mortal had ever wreaked upon an enemy.” (Hawthorne, 127). Despite this horrific thought from Roger, Arthur made no move to try to threaten and scare him in any way. Despite their many differences, they have similarities as well.

Proctor and Dimmesdale are similar, because they broke the morals and beliefs in both their society and religious teachings. Dimmesdale had an affair with Hester Prynne and implies, “If thou feelest it to be for thy soul’s peace, and that thy earthly punishment will thereby be made more effectual to salvation, I charge thee to speak out the name of thy fellow-sinner and fellow-sufferer!” (Hawthorne, 63). This explains that he broke one of the morals in not only society, but in religion as well by having an affair with Prynne.

Proctor as well demonstrates breaking the social and religious morals, by having an affair with Abigail. The quote, “No more! I should have roared you down when first you told me your suspicion. But I wilted, and, like a Christian, I confessed. Confessed…” (Miller, 52), reveals that John did have an affair and broke the morals of his religion. Proctor and Dimmesdale are both similar in that they let their own minds lose control of their self-control which led them to do this.

John and Arthur may be two different people that have many differences, but they also have some similarities. John is different from Dimmesdale in which he cannot accept the truth, and is always threatening people. Arthur, though, is a bit more self-controlled compared to Proctor. But, they have the similarity of committing the affair and having to live with the guilt in their hearts for a long time. Even though they come from two very different stories, they have a similarity that cannot be looked passed upon. 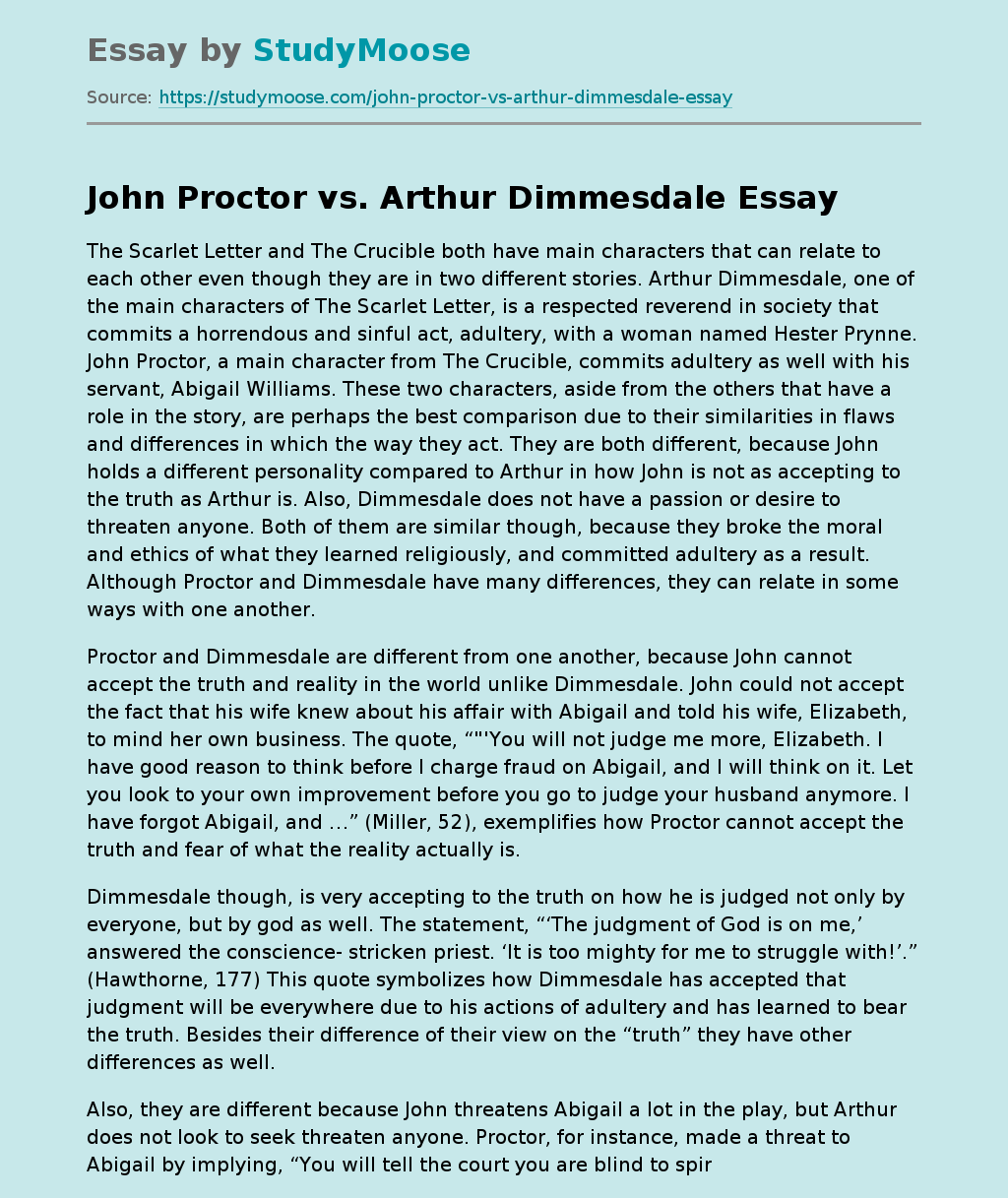