John Dewey-Role of the Teacher

John Dewey An American philosopher, psychologist, and educational reformer, John Dewey (October 20, 1859 – June 1, 1952) was one of the recognized founders of Pragmatism and a leader in progressive movement in U. S. education during the first half of the 20th century. The individual being, its relationship with the organizational or societal dynamics as well as the reason or logic around it is the essence of progressive philosophy of John Dewey.

Cooper (1995) in Wells (2006) states that problem solving and creating skills, needed for in today’s world is emphasized in a progressivist curriculum which should be built around the students’ needs and personal experiences and it is a must for a teacher to present lessons that simulate a real-life situation to their students.

Don't use plagiarized sources.
Get Your Custom Essay on John Dewey-Role of the Teacher Just from $13,9/Page

Teachers’ understanding of an individual should be based on critical analysis evaluation using practical or realistic verification.

Dewey (University of Albany, 2006) states that a person using the “problem solving approach” and the “experimental focus” of scientific method to govern their own life was the building block of how reasonable and ethical organizations operate and that school should be “child centered” with the curriculum and instruction tailored to facilitate the development of the individual.

According to Sidorsky (1977), Dewey called as oppressive the elementary and secondary schools for they do not promote exploration and growth, thus, through his works a number of reforms in schools around the U.

S. were implemented to enhance the development of free personalities. Dewey’s belief (1938) that schools should teach its students how to think rather than learning rote lessons and develop analytical approach in problem solving in real life situations. According to Campbell (1995), Dewey espoused judgment focus schools rather than knowledge should be developed and used in order for school children to become mature persons and can give sound judgments on the problems of human living.

Further, he believes that schools, as an institution, should inculcate in the minds of the students and put to practice the learned techniques on how to live and work cooperatively and harmoniously with others. As Dewey’s beliefs focused on the learner’s right to participate on any decision that will affect their learning, he was more concerned with teachers’ rights as well as their academic freedom. Flanagan (1994) states that Dewey’s aim was to create a laboratory school where children are free to learn for themselves with an able tutelage from a professional mentor.

It was in the old school according to Dewey (Flanagan, 1994) that the teachers forced the learners against their will or interest in order to learn the structured or established subjects. There were two main teacher functions according to John Dewey. First, the teacher must guide the young learner through life complexities and give them opportunities to learn in the natural way by means of solving relevant problems. Second, a teacher must also enable the young learner to adequately cope with contemporary conditions and the new tasks, which an unforeseeable future may bring.

In Dewey’s type “classroom,” the teachers should plan its lessons in order to arouse students’ curiosity and push them to a higher level of knowledge thus encourage them to learn by doing and to interact with one another, and develop cooperation and tolerance as a virtue. Also, they are encouraged to solve problems on a variety of actual situations which they may encounter outside the four walls of the classroom and in the process develop flexibility in problem solving as well as in acquiring needed tools necessary for adulthood (Wells, 2006).

Progressivists’ Dewey according to Wells (2006) believes that this approach to education is a perpetually enriching process of ongoing growth. The critical thinking skills development can be best achieved through soliciting queries from students. In a progressive classroom, the teacher creates practical activities that would guide the students through problem solving and show its relevance to their lives outside of the classroom. Wells (2006) also states that these teaching methods also include guided discovery and hands-on learning.

She stated that not only do the students discuss what they are learning, but they also experience it through role-playing. Finally, according to Wells (2006), the progressivist teacher believes that in “hands-on” approach, children will learn better. Dewey (1938) in Flanagan (1994) wrote that teacher’s school presence as community member was to select the influences that will affect the young learner and to assist them in the appropriate responses to the given influences and not to impose upon them certain ideas or to form certain habits.

Further, the teacher’s business is simply to determine, on the basis of varied experiences and sound wisdom, how the disciplines of life shall develop the personality of the child. According to Dewey (1938) it is the primordial obligation of an educator to comprehensively understand the nature of human experiences otherwise they will fail in their responses to young learners. In Neil (2005), it was stated that experience arises from the interaction of two principles — continuity and interaction as conceptualized by Dewey.

In sum, individual’s present experience is a function of the interaction between one’s past experiences and the present situation. Finally, an environment full of socially-interacting relationships coupled with relevance and responsive to young child’s needs is the key to learning. The students, in this type of environment, create relationship between their classmates, friends or between them and their teachers thus facilitate their learning.

These relationships make the children more comfortable and safe and in return they receive good learning needed in their lives. 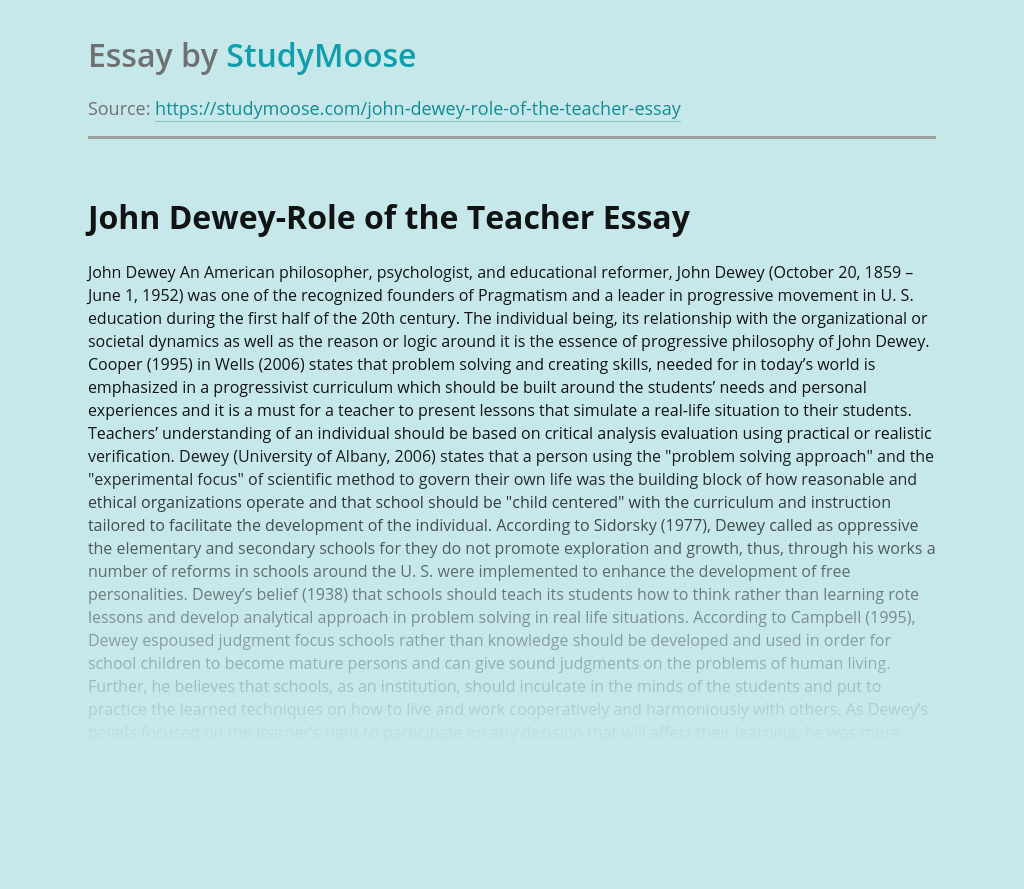 The major causes of the French Revolution

The major causes of the French Revolution were the disputes and inequalities between the different types of social classes in French society, and the financial problems, facing the French government, during the year of 1779. The French Revolution of 1789-1799 was one of the most important events in the history of the world. The Revolution...

ii.Abstract We all know that our country today is suffering from crisis. That was the reason why we want to launch this study, since shoe polish now a days is very needed and is costly, we want to produce a more cheaper and efficient shoe polish to use. This project determines the possibility of the...

Get Essay
Basic Approaches in Psychology

Today, few psychologists identify their outlook according to a particular school of thought. While you may still find some pure behaviorists or psychoanalysts, the majority of psychologists instead categorize their work according to their specialty area and perspective. Every topic in psychology can be looked at in a number of different ways. For example, let’s...

Journal on “Hands” by Sherwood Anderson

The short story, Hands, which was written by Sherwood Anderson, basically revolves around Wing Biddlebaum, who is the main character of the story, and his struggles to cure his seemingly “uncontrollable hands. ” In the story, Wing is portrayed as a middle-aged and nearly bald man who lives alone in his home. His only friend...

Amy Heckerling transforms the many values and issues conveyed in Jane Austen’s Emma, set in the 18th century in Highbury to her teen pic film Clueless set in the 20th century, in a high school society. Both texts involve a protagonist, being Emma in Emma and Cher in Clueless who meddle with the relationships of...