The great flaw in Gatsby’s character is his excessive obsession. We find out towards the middle of the book Gatsby is obsessed with Daisy to the point that his life is ‘Daisy’. He throws extravagant parties in hopes her being there. He purchases a palace of a mansion simply because it is close to Daisy’s home. He makes a living only to prove himself worthy to Daisy. He lives for ‘Daisy’, but he does not live for the living Daisy.

Don't use plagiarized sources. Get your custom essay on
“ Jay Gatsby the Tragic Hero ”
Get custom paper
NEW! smart matching with writer

Gatsby is so infatuated with ‘Daisy’ that he is bent on the magnificent fantasy of a Daisy to which no human can compare.

He chooses to remain loyal to the young Daisy of eighteen, who was “by far the most popular of all the young girls of Louisville…dressed in white, and had a little white roadster” (Fitzgerald 72-73). In the words of Fitzgerald: “No amount of fire or freshness can challenge what a man can store up in his ghostly heart” (93).

This is very true, as the real Daisy served no other purpose to Gatsby than to bear a faint resemblance to the fantastical angle he had conjured out of his shattered dreams. Neither Gatsby nor anyone can gain anything from such a delusional happiness.

Gatsby has many nemeses in the novel. George Wilson can be considered a nemesis because it is at his hands that Gatsby meets his death. Another rival of Gatsby’s is Tom Buchanan, our protagonist’s adversary in love who also had a hand in the hero’s downfall.

In my opinion however, the arch-nemesis of Jay Gatsby is none other than Jay Gatsby. I believe Gatsby’s own actions and flaws in character have brought about his demise. Gatsby was the one who built his entire life gravitating around a single ideal of a girl he once loved. Gatsby was the one who took the initiative to meet Daisy. Gatsby was the one who, having already gained the affections of Daisy, pressed her, on page 126, to testify that she’s never loved Tom. In the words of Daisy, “you [Gatsby] want too much…I can’t help what’s past” (126). Indeed, Gatsby asked for too much, and in return, if not retribution, everything blew up in his face with nothing left but a dying dream.

Gatsby’s ending in The Great Gatsby was certainly anything but happy. For one thing, he was murdered. On top of that however, lays an even crueller fact. That is, Daisy never called. Gatsby would have died just a little more at ease if he had known that the object of his fascinations for 4 long years showed any hint of remorse that they may very likely be torn apart. She did not. Gatsby’s soul would have rested easier as well if the person for whom he died showed any sign of sorrow for his departure. She did not. Nor did any of his many acquaintances, save one, turn up to pay respects to the man whose generosity they had often molested. If this is not tragic, what is?Gatsby’s demise is so metaphorical and symbolic that it is hard to pinpoint exact what Fitzgerald was trying to say.

Gatsby, a prosperous and extravagant self-made man, was killed by a downtrodden worker of the slums. Could this be alluding to a communist-style revolution? Daisy is quite similar to the American Dream, both being glorious and full of promises to he-who-wins-it. If Gatsby died in trying to get ‘Daisy’, is Fitzgerald denouncing the American Dream? There is, however, evidence that Fitzgerald still believes in the American Dream, as Daisy bears a few dissimilarities to it. That is, Daisy, in principal, is far more superficial, cursory, and lax than the “white picket fence” American Dream. Could Fitzgerald also have been trying to convey that the Dream has been perverted to such an extent that he-who pursues-it shall fail tragically, just as Gatsby had? The possibilities are endless, but one thing Fitzgerald was trying to express is certain: do not follow in the footsteps of Jay Gatsby, or we too will meet a tragic demise. 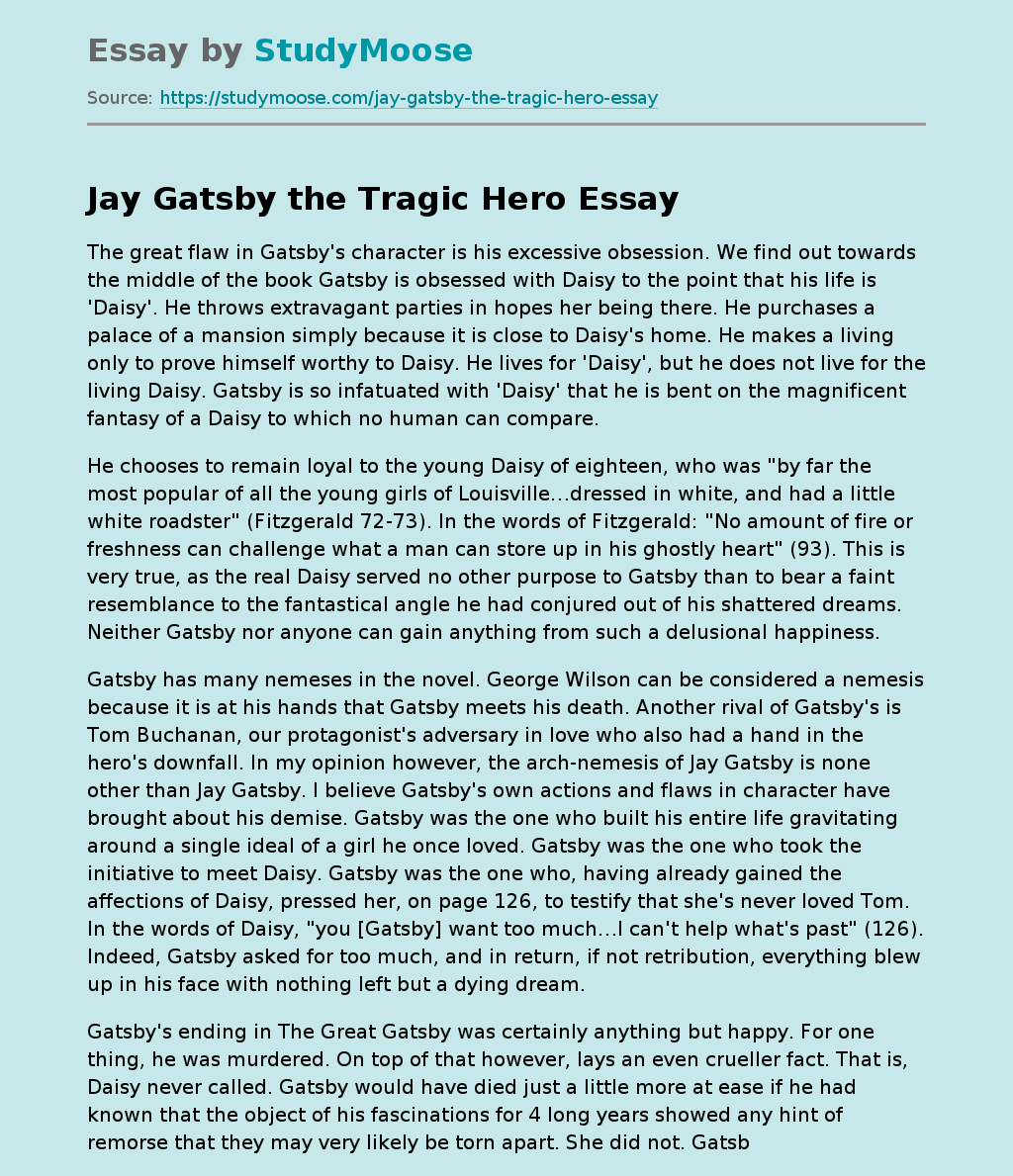