With reference to appropriately selected parts of the novel, and relevant external contextual information, give your response to the above view. This statement suggests that Jay Gatsby is a modern version of the original frontiersman. The American frontiersman of earlier times can be defined as a settler who came from another land (usually Europe) to find work and conquer new lands. Frontiersmen tended to be self-reliant and determined to take on the wilderness. It is possible to draw a comparison between this and the story of how Gatsby reinvented himself.

Don't use plagiarized sources. Get your custom essay on
“ Jay Gatsby is an updated version of the American frontiersman of earlier times ”
Get custom paper
NEW! smart matching with writer

In examining this view, a good place to start is how Gatsby exhibits the trait of self-determination.

Early settlers from Europe spoke of the New World in opposition to the Old World they had left behind. The history of settlement is broadly the history of westward movement, as new arrivals and restless pioneers sought to begin America again with their own exploration of the untamed continent. The Frontier has this physical reality, but it also has a psychological reality which has persisted long after the exhaustion of physical space to explore.

It is this psychological aspect we see in the character of Gatsby. Gatsby is the very embodiment of self-determination.

He came from a less than affluent background: “His parents were shiftless and unsuccessful farm people — his imagination had never really accepted them as his parents at all. ” Despite this start in life, he was proactive and began to reinvent himself: “So he invented just the sort of Jay Gatsby that a seventeen-year-old boy would be likely to invent.

” Just like the early frontiersman, Gatsby decided to leave his home and journey towards a better life, although the original frontiersmen headed from east to west whereas Gatsby did the opposite.

This slight geographical difference makes him an updated version of the American frontiersman of earlier times, although the original spirit of adventure and self-improvement is universal. Further support for this proposition can be found when we consider the exploitative nature of the frontiersman and how this can be updated to relate to Gatsby. The original frontiersmen exploited both the land and the Native Indians who owned it, through methods of violence and bioterrorism. The Americans had far better weaponry than the Native Americans, but the biggest killer was diseases brought over by the Europeans, especially smallpox.

The Native Americans weren’t exposed to this sicknesses and immunity wasn’t in their gene pool, so they died much faster than the Europeans. Although Gatsby doesn’t have any natives to exploit, it could be argued that he is still exploitative but in a more updated manner. Nick makes a direct comparison between Gatsby and the American frontiersman of earlier times. He writes of, “the old island here that flowered once for Dutch sailors’ eyes… Its vanished trees, the trees that had made way for Gatsby’s house, had once pandered in whispers to the last and greatest of all human dreams. This suggests that Gatsby has exploited the local environment in order to build his house. Whereas the original frontiersman exploited natural resources such as oil, Gatsby exploits economic resources. Despite living near an area of intense poverty, Gatsby spends all of his wealth on achieving his own selfish dreams. When we consider that Gatsby has exploited both land and money, it is easy to see why many view him as an updated version of the American frontiersman of earlier times. Moreover, it could be argued that Gatsby’s apparent lawlessness links him to the American frontiersman of earlier times.

Fitzgerald hints at the criminal reality of Gatsby’s life several times in the book, even from the rumours spread by his party guests: “Somebody told me they thought he killed a man once. ” Later on in the novel Gatsby’s own behaviour when Nick asks about his business suggests that he is not as pure as he likes to appear: “I think he hardly knew what he was saying, for when I asked him what business he was in he answered, “That’s my affair,” before he realized that it wasn’t the appropriate reply. The American frontiersman of earlier times also engaged in criminal activities, which was referred to as banditry. This was conducted by the infamous outlaws of the West, including Jesse James and Billy the Kid, who preyed on banks, trains, stagecoaches, and in some cases even armed government transports such as the Wham Paymaster Robbery. Although popular media has glamorised these figures, in reality they are little more than lawless criminals. The same can be said of Gatsby; his lifestyle appears to be glamourous on the outside but is simply a facade for a life of crime.

There may be some merit to this opinion, especially when we consider what each party hoped to achieve. Establishing a new frontier involved the claiming of land, a tangible and worthy and fulfilling acquisition, while achieving the materialistic American Dream is empty in its hollow materialism. This empty materialism that absorbed Gatsby’s life is clearly evident from the descriptions of his house: “His house had never seemed so enormous to me as it did that night when we hunted through the great rooms for cigarettes. When the frontiersman claimed new land, it was farmed and settled upon for the good of the community. Gatsby, on the other hand, has built an empire based not on community but on selfish accumulation of wealth for the sake of wealth. We get a sense of how careless he is about his possessions when he brings Daisy to his house: “He took out a pile of shirts and began throwing them, one by one. ” Again, this is the opposite of how a frontiersman would treat his new possessions.

Gatsby’s failure is evidenced when Nick writes about his death: “It was after we started with Gatsby toward the house that the gardener saw Wilson’s body a little way off in the grass, and the holocaust was complete. ” The use of a word as strong as holocaust emphasises how tragic Gatsby’s death was; he never attained his dream of being with Daisy. Frontiersmen, on the other hand, are renowned for succeeding in their quests. An example of a successful frontiersman is Daniel Boone, an explorer. Under Boone’s leadership, the team of explorers discovered a trail to the far west though the Cumberland Gap.

The trail would become the means by which the public would access the frontier. Compared to men like Boone, Gatsby is pathetic and is not an updated version of the American frontiersman of earlier times. The claim that Jay Gatsby is an updated version of the American frontiersman of earlier times could be contested when we consider that other characters may be a better fit. A key example would be Dan Cody. We are told that he was, “a product of the Nevada silver fields, of the Yukon, of every rush for metal since seventy-five. This is a reference to the Gold Rush. In these metal rushes, workers would migrate quickly to an area rich in a certain metal seeking a profit. The particular Yukon gold rush in question was the Klondike Gold Rush. These exploits, “made him many times a millionaire. ” Dan Cody is the quintessential frontiersman who uses the natural resources that can be found in new lands to build up a fortune. Furthermore, it is likely that his character is based off a real frontiersman called William Cody, or Buffalo Bill.

Even from the young age of 14, in 1860 Cody decided to search for gold, with news of gold at Fort Collins, Colorado and the Holcomb Valley Gold Rush in California. It is obvious to the reader that the true updated version of the frontiersman of earlier times is Cody, not Gatsby. To conclude, after careful consideration we determine that Jay Gatsby is an updated version of the American frontiersman of earlier times, although this comparison could also be drawn to several characters in the novel. The opposing arguments have some merit but ultimately they fail to realise the true implications and context of The Great Gatsby.

Jay Gatsby is an updated version of the American frontiersman of earlier times. (2020, Jun 02). Retrieved from https://studymoose.com/jay-gatsby-updated-version-american-frontiersman-earlier-times-new-essay 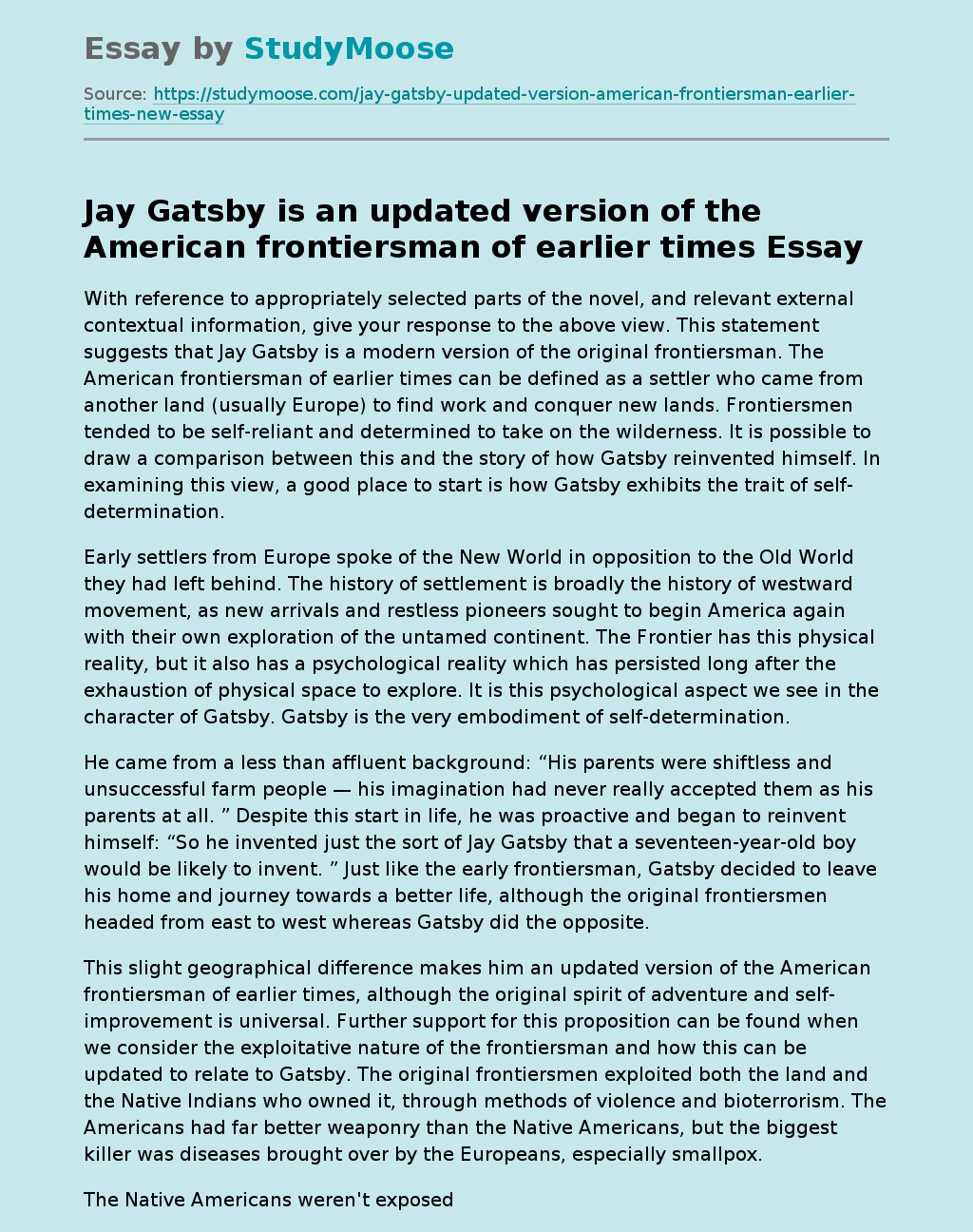