F. Scott Fitzgerald’s The Great Gatsby is often regarded as the ‘Great American novel.’ First published in 1925, The Great Gatsby follows narrator Nick Carraway during the summer of 1922. The novel presents a depiction of the American Dream during the period known as the ‘Roaring Twenties.’ The title character, Jay Gatsby, is a mysterious millionaire known for hosting lavish parties. Much of the story focuses on Gatsby’s love for Daisy Buchanan. Daisy once dated Gatsby but is married to a former Yale star athlete named Tom Buchanan when the novel begins.

Don't use plagiarized sources. Get your custom essay on
“ The Title Character, Jay Gatsby ”
Get custom paper
NEW! smart matching with writer

Owing to its immense popularity, The Great Gatsby has been adapted into films on many occasions. Baz Luhrmann directed the most recent adaptation in 2013. It stars Leonardo DiCaprio as Jay Gatsby and Tobey Maguire as Nick Carraway. The film is mostly faithful to the source material and is quite similar to the novel in terms of characters, plot, and setting. However, there are some minor differences between the film and Fitzgerald’s original novel.

One of the most notable aspects of the film is the extent to which director Baz Luhrmann remained faithful to the novel’s source material. Much of the dialogue is taken verbatim from the novel. It is possible to view the film while following along with the novel. All of the major characters from the novel, including Nick, Gatsby, Daisy, Tom, Jordan, Myrtle, and George are featured prominently in the film. The film also captures the lavish setting of the wealthy Long Island suburbs, Gatsby’s estate.

The viewer is first shown the outside of Gatsby’s mansion as dozens of cars arrive before being taken inside to an opulent party where a few hundred people are dancing and drinking. This effectively captures the grandiosity of Gatsby’s legendary parties. In many ways, the novel appears ideal for a film adaptation, with its focus on young, wealthy, and attractive people. However, unlike other classic novels, The Great Gatsby is relatively brief at approximately one hundred and fifty pages. It is set over the course of a lone summer and is more akin to a series of montages of important events rather than a continuous story. Each of these events features prominently in the film, including Nick’s visit to New York City with Tom and Myrtle and the subsequent apartment party. Luhrmann also effectively contrasts George and Myrtle’s living arrangements on a dilapidated industrial site with those of the film’s wealthy characters. Still, there are some noticeable differences between the film and novel.

F. Scott Fitzgerald set The Great Gatsby within a distinct time period, but Baz Luhrmann adds modern touches to the 1920s, in particular through the use of music (such as rap) which gives the film a distinctly modern feel. Perhaps the most significant difference between the two versions is how the movie uses a frame story to recount the events of that fateful summer of 1922. Nick is shown many years later receiving treatment at a psychiatric institution and he tells the story of Gatsby to his doctor. Nick decides to write down his thoughts at the doctor’s recommendation, thereby turning Gatsby’s story into a book as the film progresses. This device is entirely absent from the novel. However, in the film, it is used effectively, and some of the novel’s dialogue is better suited to Nick’s flashback narration in the movie. In the novel, Jordan is not introduced right away, and she is referred to as ‘Miss Baker’ before Nick learns she is in fact the famous golfer Jordan Baker. However, in the film, she is introduced by name almost immediately. Her romance with Nick is also absent from the film and we do not learn as much about her character. Although Tom is far from a hero in the novel, he is shown to be even more of a villain in the film. In the novel, Wilson himself discovered that the yellow car was owned by Gatsby, but he is given this information directly from Tom in the film. In the novel, we only learn this fact when Nick sees Tom in Manhattan months after Gatsby’s death; this encounter is also absent from the film. The hotel scene was even more intense in the movie because Gatsby grabbed Tom and yelled at him to ‘Shut up!’ which was not part of the novel. Following Gatsby’s murder, he is viewed as a pariah because people believe he was responsible for the horrific events surrounding Myrtle’s death. In both versions, Daisy did not attend his funeral. His funeral in the film is particularly lonely because no one attended. However, in the novel, Gatsby’s father, Henry C. Gatz, a poor old man, arrived from Minnesota unexpectedly. This provided a sense of closure and the reader also learned more about Gatsby’s early life when he a poor boy named James Gatz.

In conclusion, Baz Luhrmann’s film adaptation of The Great Gatsby is actually very similar to F. Scott Fitzgerald’s novel. The film version remains faithful to the characters, plot, and setting of the novel, while adding some modern elements such as rap music. All of the major characters and important events from the novel are present in the film, and the extent to which Luhrmann was able to use the novel’s dialogue is impressive. However, there are still some notable differences in the film. Nick’s admission to a psychiatric hospital as a means to recount Gatsby’s story is entirely absent from the novel, while the film version does not feature Jordan Baker as prominently. Tom is the film’s primary antagonist and he is shown to be even more ruthless than in the novel. Lastly, Gatsby’s father travels to his son’s funeral in the novel, whereas in the film the event is even more lonely. Overall, the film version of The Great Gatsby is faithful to its source material and most differences are relatively minor. 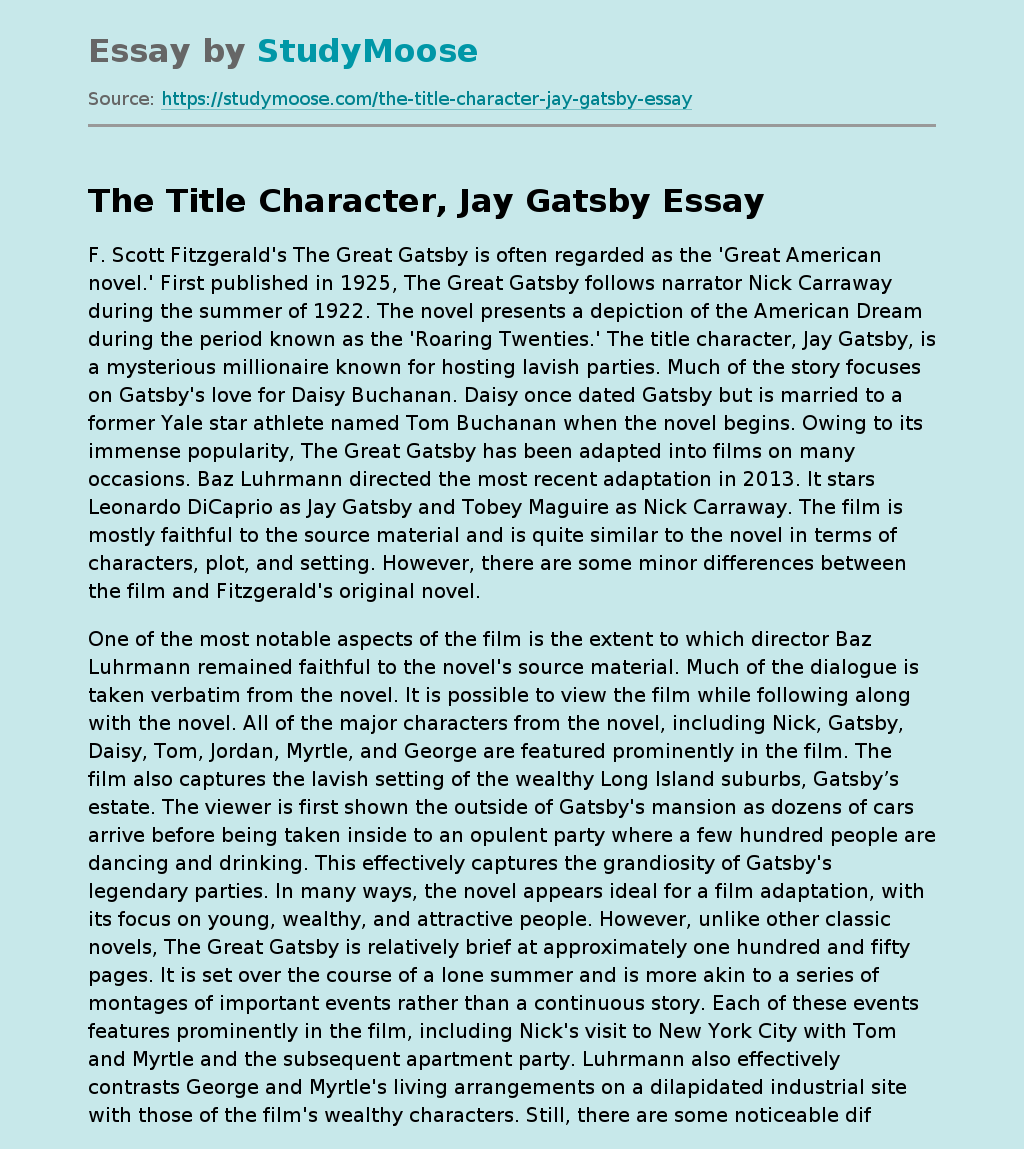