Indigenous people as defined by the Cobo report (1987) are “a group having a historical continuity in pre-colonisation societies with a distinct culture now a minority in society today”. Throughout history and times of colonization change has been seen in a plethora of ways. Importantly for Australia has been the take over of land by the British under the doctrine of Terra Nullius, which means meant that if land was populated by “backward peoples”, as in it was “unoccupied” it was considered as if it were unpopulated, as there was no formal organised system of living or Government.

Don't use plagiarized sources. Get your custom essay on
“ Law Reform on Native Title ”
Get custom paper
NEW! smart matching with writer

The common law term for this is acquisition of settlement. There are many cases in our history that have been both effective and ineffective: The Gove Land Rights Case, Mabo I & II and the Native Title & Amendment Acts, which have had the purpose of creating justice, and just outcomes through law reform, with a particular focus on Native Title.

The Bark Petition and Gove Land rights case sought to have land rights recognised by the Australian Government (1971).

The argument provided was that the yolngu people had a complex social and legal system, a Government of laws, not of men. Justice Blackburn rejected the argument, as Australia had been settled and established by the British, so the Doctrine of Reception existed. With no case of this type in Australia’s history, it was a huge step forward in creating justice, but also meant there was nothing comparable to it. Consequently, it was a big step forward as it was the first time a Legal Fiction of Terra Nullius, which overturned many previous assertions and provided a way forward and a path for the Mabo cases.

This was the first step in a long law reform process, none the less providing a developing just and effective outcome for Aboriginal people.

Restriction on movement for Aboriginal people provided many problems, including loss of connection to land, spirituality and ancestors. In the eyes of Eddie Mabo, this was an infringement of his basic human rights. In 1982, Fr. David Passi, James Rice and Eddie Mabo began an action, which saw a case before the High Court of Australia in Mabo v. Queensland (No.2). Mabo v. Queensland (No.1) saw the 3 men declare that: the Meriam people were entitled to the Murray Islands and that the State of Queensland had no right to extinguish the Meriam people’s title to the Murray Islands, and that a system of Native Title had been established, against the Queensland Coast Islands Declatory Act (1985), which attempted to extinguish Native Titles. The final decision in Case1 did not address the issue of whether native title existed, but found Queensland was trying to restrict the land rights because of their race.

Mabo v. Queensland (No.2) required the court to consider that: if Australia was truly terra nullius at the time of settlement, then the Islanders had no case, on the other hand, if the English had ‘invaded’, then the original inhabitants would be recognised. The ruling showed a majority of six to one, and the High Court ruled that the Murray Islanders had the right to the possession, occupation and enjoyment of traditional lands. This was based on two key points: firstly that the declaration of Terra Nullius was not valid, so native title could not exist, and secondly that native title existed wherever Indigenous people had occupied the land prior to European settlement. This was a major step forward in Australia’s history as well as in creating and effectively achieving justice in regard to native title. As apart of a broader picture and a law reform process, it showed a big step toward the future as it meant that Terra Nullius was overturned which meant further reform could take place, setting precedent for the overall goal of achieving justice as well as the broader society in terms of recognition.

Following Mabo v. Queensland (No.2), the Commonwealth Government passed the Native Title Act (1993), which saw the official recognition of native title. Native Title is defined in Section 61 of the Act as the rights and interests of Aboriginal and Torres Straight Islanders observed under traditional custom and recognised by the common law of Australia. This important step in changing Australian law and achieving justice for Aboriginal people was followed by the Native Title Amendment Act (1998), which saw changes to The Native Title Act after a push by the Howard Government in regards to the response to the Wik case and meant it harder to make registration of a claim and to increase interests of miners and pastoralists.

The effectiveness of law reform process in achieving just outcomes in regard to native title has shown to be effective through a constant law reform process. This process has seen the development of new ways, beliefs and values, as well as the abolishment of the doctrine of terra nullius, creating justice for Indigenous Australians then, now and into the future. 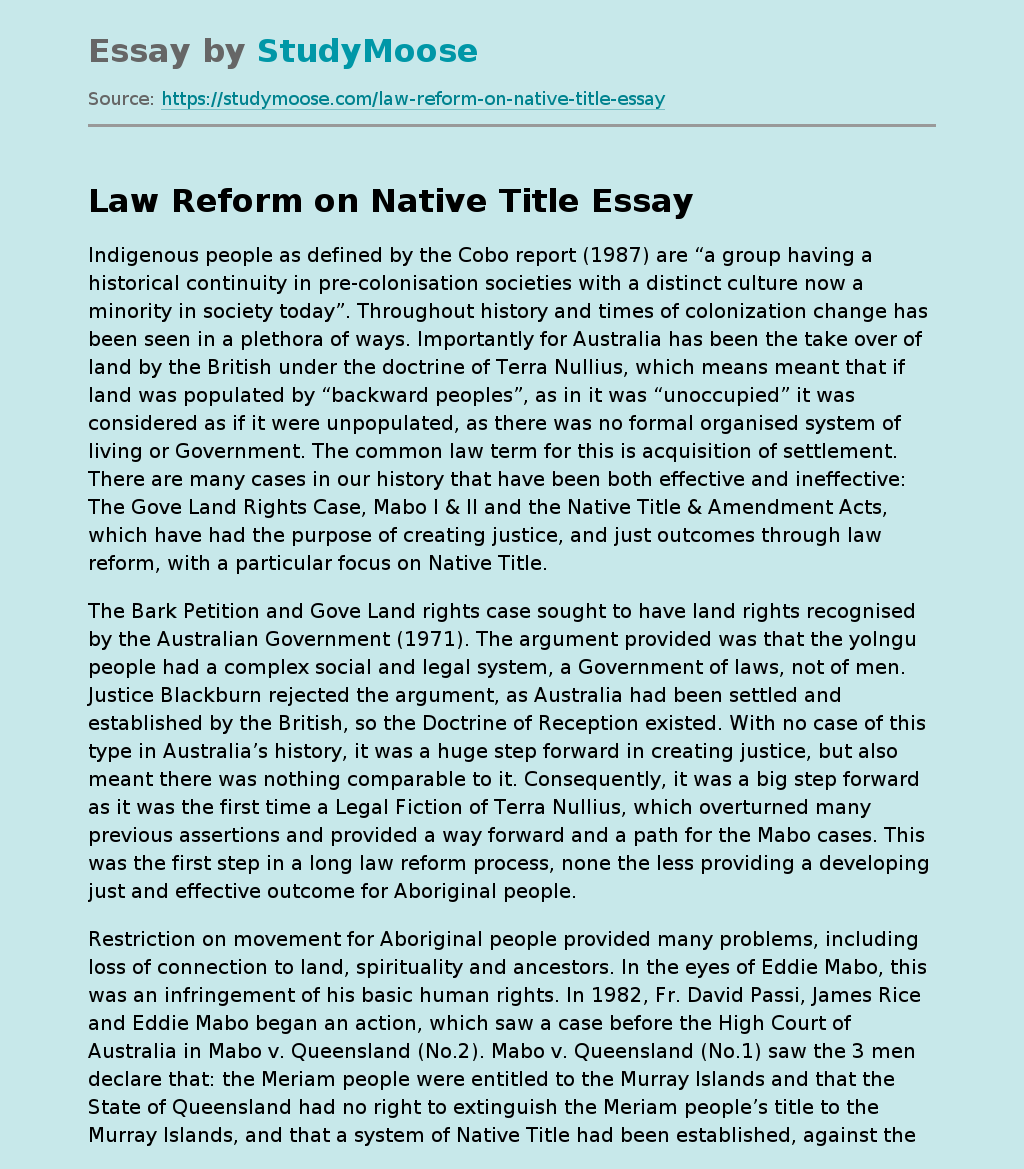