Jasmine is About a Young Indian Lady

The novel is based in the 1980 jasmine is about a young Indian lady. She is made to take on different personas in her life in that she had to change her identity severally. Jasmine became an immigrant in the United States, and in an effort to survive and make do with her life, she had to adopt these identities. Jasmine tries to make these different identities exist in harmony instead of not accepting them. The writer Bharati Mukherjee had experienced displacement in her life, so writing from the immigrant’s perspective was taken from her own life.

Don't use plagiarized sources. Get your custom essay on
“ Jasmine is About a Young Indian Lady ”
Get custom paper
NEW! smart matching with writer

In the novel, Jasmine is made to move to the United States after her husband was killed in a bomb attack. This would make her become a widow at only seventeen. This was from something she was told by an astrologer when she was seven years old. The astrologer who was under a banyan tree and supposedly foretold how jasmine would be living in exile and her widowhood.

Jasmine reacts to this by marking her forehead with a star-shaped marking through a fall, which she saw to be her third eye. This other eye was to allow her to be in contact with a world beyond our human perception. She saw the statements by the astrologer to be demeaning to her. She said the astrologer was an older man that could not see what her future held for her. Before Jasmine went to the United States, she was known as Jyoti. Jyoti got married after her father’s death owing to the patriarchy in their society.

Jasmine married one of her brother’s friends, who was known as Prakash, who believed India was no place for feudalism. Prakash gave her the name jasmine in order to break her away from her past as it also represented his views on feudalism. Prakash also asked her to call him by his first name which was not the norm at that time.

During that period, there was tension in Punjab owing to Sikh terrorists who planted bombs. Prakash was planning on pursuing his studies in the United States together with jasmine when he was killed by one of the Sikh weapons as they were shopping for saris. As a result, jasmine is devastated and wants to perform sati, which is a Hindu tradition that demanded she burn herself. This would be against the wishes of her recently deceased husband. Prakash wished for her to take on the role of a modern city woman. Instead, Jasmine moves to the United States alone in order to bring her husband’s wishes to reality. She sees her husband’s decision to change her name from Jyoti to Jasmine to be the beginning of her move away from India.

Jasmine moves to Florida using train, aircraft, and ship to reach her destination. She saw this as a matter of honor and duty. She had forged her immigration documents, so on her arrival to the shores of Florida, Jasmine experiences an example of racial segregation. She has an encounter with the captain of the ship, who was known as Half-face. Half-face takes jasmine to an inland motel where he rapes Jasmine. Jasmine feels defiled by the man’s actions, and to regain herself, she contemplates taking her life. Instead, Jasmine kills Half-face, which gives her a sense of purpose as she confronted the man that had made her a victim of his actions. Jasmine then burns her husband’s suit that she had brought with her to burn herself with it in honor of Prakash. (Mukherjee, 1999).

When Jasmine moves on, she encounters a woman called Lillian Gordon, who had taken in some other women who were in similar situations. Lillian was incarcerated because of taking advantage of these women. As Jasmine stayed with Lillian, she got the name Jazzy, which brought her more in tune with the culture of the United States. Jasmine met with Lillian’s daughter, who was known as Kate Gordon-Feldstein. Later on, she moved in with Professor Vadhera, who knew Prakash, she calls him Professorji, and he also agrees to get her a green card. As she stayed with professorji she felt that his Indian culture drew her away from the American culture, causing a delay in her progress. Jasmine wanted to forget her Indian past, and surrounding herself in that situation with things that took her back made her feel like she was stuck.

Lillian’s daughter, Kate Gordon-Feldstein, introduced Jasmine to some of her friends, Taylor and Wyllie Hayes. She moved to the Hayes’ place in Manhattan to take care of Duff, who was their adopted daughter. As she was in Manhattan, Taylor called her Jase, which makes her assume a different identity. As she stayed with the Hayes’, she practices speaking English to better fit in with the American culture. After Taylor and Wiley break up, Jase decides to continue taking care of Duff. Jasmine begins becoming intimate with Taylor, but after seeing the man that killed Prakash as they were out for a walk in the park. She feels her presence in their life could put them in danger, so she moves to Iowa. Duff’s birth mother lived in Iowa, and moving there made her feel that she was escaping her past that had caught up with her. In Iowa, she met up with a man known as Bud, who had taken in a sixteen-year-old war victim identified as Du. Bud had been married, and his wife felt that jasmine had taken her husband away from her. Bud renamed jasmine as Jane, which gave her a new identity. (Mukherjee, 1999).

Jasmine still experienced episodes of trauma after seeing her husband’s killer, and the move to Iowa was for her safety. Bud became a paraplegic after an encounter with a farmer, Kroener, who killed himself after shooting Bud., Bud’s wife, Karin softened up to Jasmine, and they had a platonic relationship. As she was in Iowa, Taylor wrote to her, saying that he would come with Duff to find her. Du begins to suspect that Jane loves another man other than Bud. Jane then proceeded to meet up with Darrel, who began disrespecting her relationship with Bud, so she left him. At that time, Du decided to go and live with his sister, who was in Los Angeles, but he would be back before his school started. Darren had requested a loan from Bud, which he had accepted, and when Bud goes to inform him, they find that he had hung himself. Du, later on, decided to stay in California.

As Jane was busy in the kitchen, she notices a car pull up into their driveway, and surprisingly enough, Taylor and Duff come out of the parked vehicle. Taylor wants to convince Jasmine to go back with them. Jasmine becomes conflicted because she is torn between Taylor and Bud. This confusion makes her takes into consideration how she felt that men had dominated her life. This domination made it impossible for her to go out by herself and acquire her identity. In this confused state, jasmine calls Karin to tell her that she had gone to see Du because she felt remorse for Bud, who would stand to lose so much if Jane left him. Finally, jasmine decided to go back with Taylor and Duff as she felt that she would eventually begin discovering who she was.

In conclusion, as jasmine went through various phases in her life, she took on different identities to best match her situation. As she handled these multiple identities, she cooperated with all of them together. She took on these identities after being made to adapt to her life for survival. Her migration into a foreign land forced her to accommodate a new culture as she struggled to escape from her past. Jasmine felt that from her childhood, the astrologer’s words were always on her back, and the happenings in her life pushed these claims. But jasmine was able to move on past them as she went back with Taylor and Duff. Jasmine is able to alter her personality to suit her needs, and her dedication to assimilate this new culture was necessary for her to manage the struggles of migration. Jasmine faced so many battles, but her vision of finding her true identity pushed her to adopt her own unique personality.

Jasmine is About a Young Indian Lady. (2019, Nov 23). Retrieved from https://studymoose.com/jasmine-example-essay 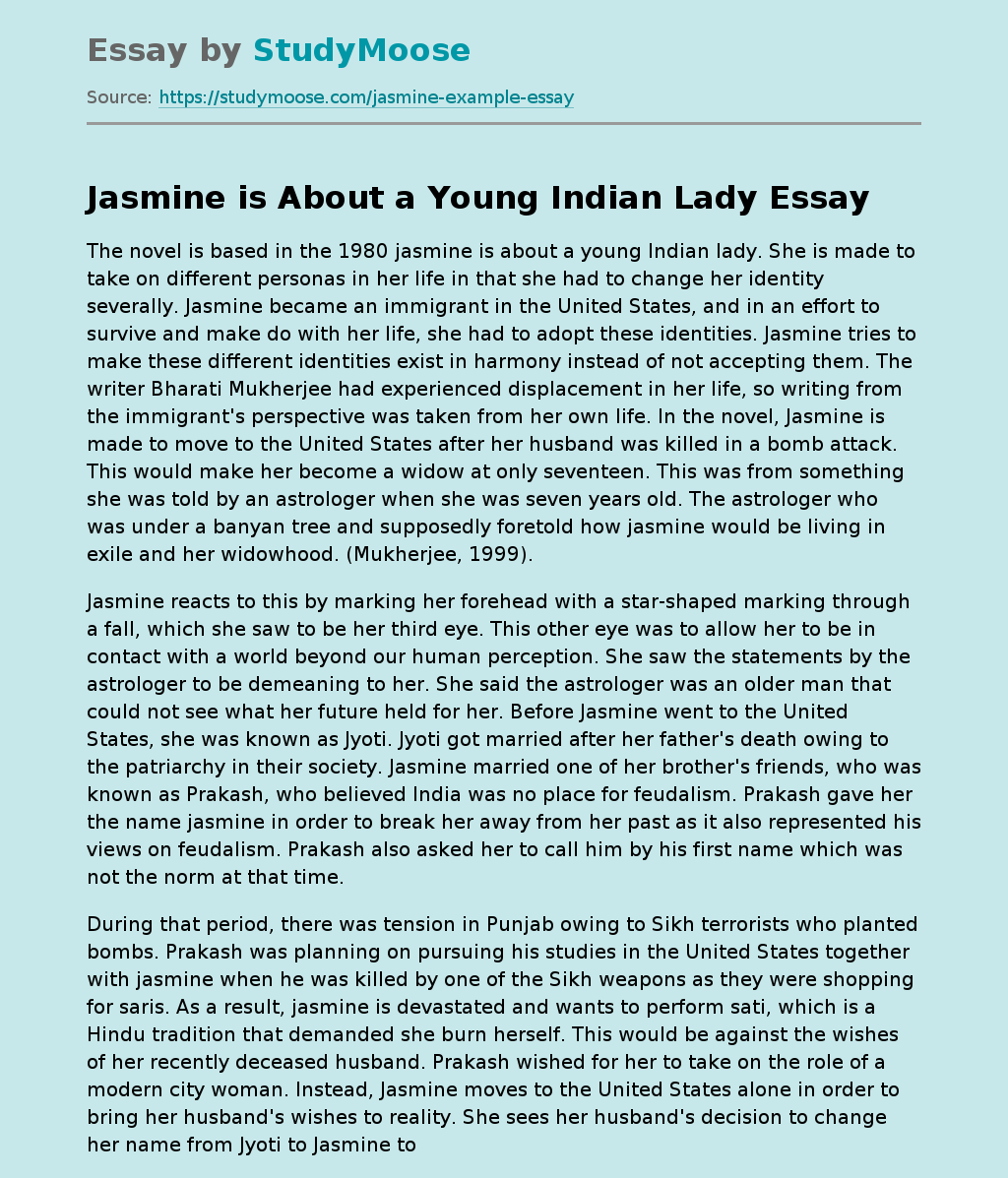