Don't use plagiarized sources. Get your custom essay on
“ Japanese Exclusion Act of 1924 ”
Get custom paper
NEW! smart matching with writer

In fact, the Immigration Act of 1924 superseded the Emergency Quota of 1921, which required three percent of the total number of people already leaving in United States from other countries in 1910, in order to further intensify the lowering down of the total number of immigrants to the United States from other country. Specifically, the said law aimed to restrict Europeans especially those coming from the Eastern and Southern part of the said region including East Asians and Asian Indians among those regions that were restricted by the federal government of the United States from immigrating into their country.

Furthermore, this act also barred all immigrants that were considered by the federal government as ineligible for citizenship based on the race, the region where a certain foreigner came from. Like for the case of those people from Eastern and Southern Europe as well as those people from the East Asia and Asian Indians was being prohibited by the federal government from naturalizing themselves into being an American citizen.

Among of those countries that were greatly affected by the promulgation of the said law, it is Japan who showed great protest and actually requested the United States to move the said laws on the case of the Japanese.

But at the end of the day, the federal government stick to their stand and continued the implementation of Immigration Act of 1924. Furthermore, the main argument of the Japanese why they were protesting on the said act was the clear violation of United States on the Gentleman’s Agreement. Now, it was deemed that this clash between United States and Japan caused great tension between the two countries and this served as the ground for Japan to become an ally of Germans during World War II.

Now as for the scope of this paper, chains of events will be discussed and revealed on how the passing of Immigration Act of 1924 led Japan towards their collaboration with the Germans on the Second World War (UShistory. com 1). Early Years of Immigration to United States In the 1860s and 1870s the Chinese, most of them were men, made up of some 10 to 15 percent of the population of many western states. After the Chinese Exclusion Act as well as the filling of the West by pioneers, that the percentage must be dropped rapidly.

Moreover, there were more Japanese immigrants as compared to Mexico and France. In 1882, around 30,000 Chinese immigrants entered the United States brining the total of number of Chinese in US to 150,000. This is also the year where the Chinese Exclusion Act was passed by the government that limits the number of Chinese that can enter the United States based on a certain percentage. This Chinese Exclusion Act is effective after 10 years and will deem to be permanent until the twentieth century.

By 1908 to 1914, federal officials recorded 6,800,000 arrivals of foreign immigrants to the United States while on the other hand only 2,000,000 departures were accounted. Moreover, ninety two percent of the total number of people arrived to United States on 1910 said that they were about to join their friends and relatives that had been living in the United States plus the fact that almost ninety percent of all the immigrants settled either North or West while leaving a small percentage to drop into the South.

There were no legislations that prohibited or regulate the number of immigrants to United States during those times regardless of from what country an immigrant came from. What caused the Japanese people to migrate to United States was the disenfranchisement of the regions of Japan from the industrial and land reforms during the “Meiji Restoration” thinking that they can improve their status of living from moving to another country.

With the booming of sugar plantations in Hawaii, a lot of Japanese workers migrated on the said state of US and then later on moved forward to California. By the early 1900’s, Pres. Roosevelt mandated the San Francisco School Board to withdraw the order regarding the segregation of Japanese school children in exchange of Japan’s rein in on emigration of peasants and laborers to the United States. 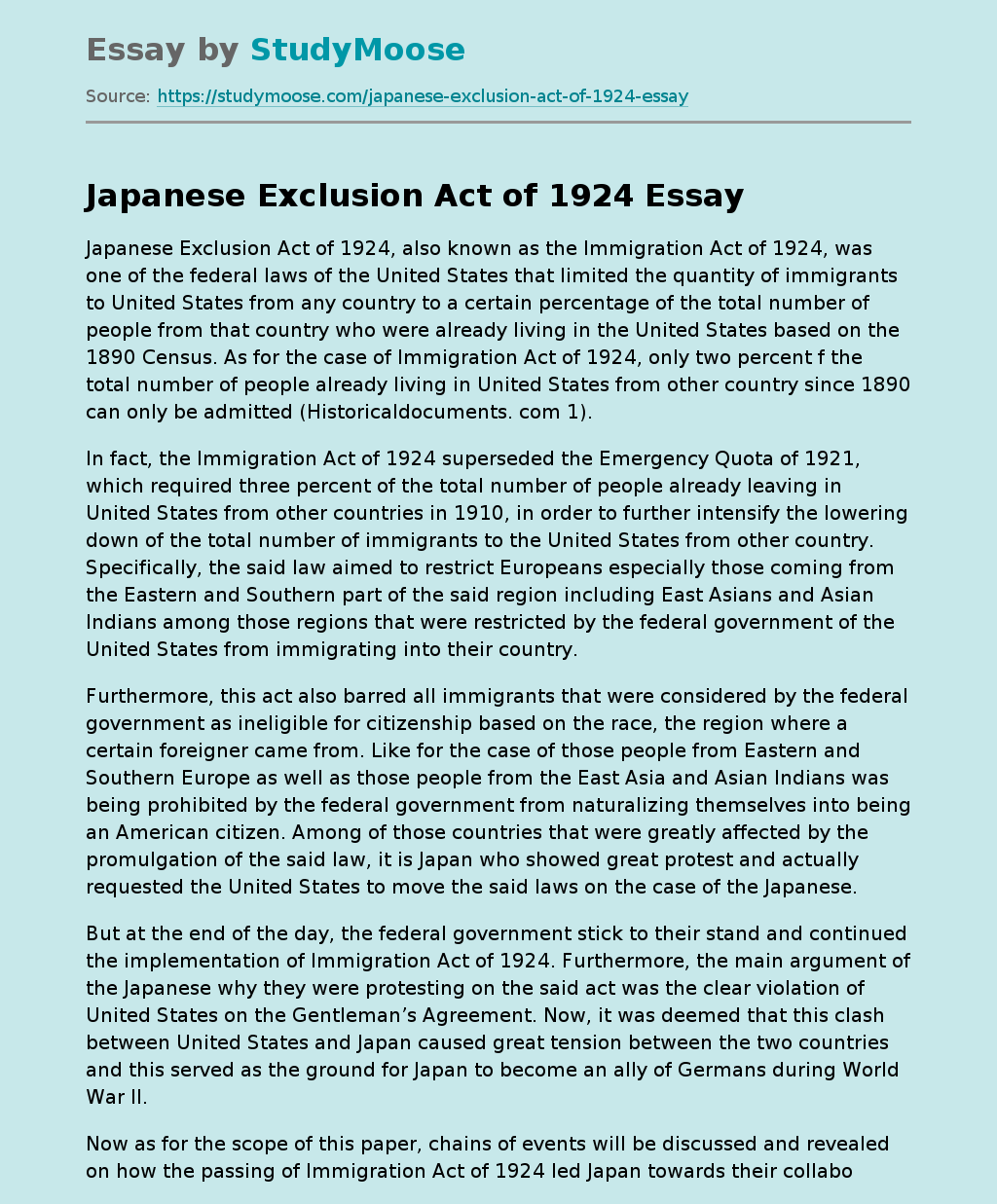