HOWE, JAMES WONG (1898-1975), photographer, cinematographer. Howe was born in Canton, China, in 1898 and came to the State of Washington in 1904 with his parents. His original name was Wong Tung Jim, which he continued to use until 1922. He is recognized for his great camera work in the United States and for bringing new, revolutionary techniques to the camera world. Among his best known photographic innovations are the use of the wide-angle lens, deep focus, and ceilinged sets to give the claustrophobic feeling of being aboard ship.

Don't use plagiarized sources. Get your custom essay on
“ James Wong Howe ”
Get custom paper
NEW! smart matching with writer

In 1947 he was also one of the first cameramen to use a hand-held camera. In his innovative methods of filming he used roller skates and wheelchairs. Because of his artistic and revolutionary techniques Howe won Oscars for the films The Rose Tatoo and Hud in 1957 and 1963, respectively. His other acclaimed films include Come Back Little Sheba, The Last Angry Man, and The Old Man and the Sea. (Hyung-Chan Kim, 1986) Howe arrived in America aged five and grew up in Pasco, Washington.

Short (5’1″) but stocky, he trained as a boxer and fought professionally as a teenager, but he was bascinated by photography Making his way to Los Angeles, he landed a job with DeMille’s unit at the Lasky Studios and worked his way up to camera assistant. Howe owed his breakthrough to a happy change. Assigned to shoot stills of the star Mary Miles Minter, he delighted her by making her eyes appear dark. (The orthochromatic film of the time lightened blue eyes into blankness.

) Puzzled at first, Howe realized that black velvet drapes behind him had created the effect.

Minter insisted he should shoot all her films, and rumours spread that she had imported her own Chinese cameraman who hid behind black velvet to work his magic. Howe was soon widely in demand. Luckily, the magician had more than one trick up his sleeve. Imaginative and experimental, Howe was never content to rely on accepted techniques. He believed that a good cinematographer ‘should be willing to gamble a little more. The normal thing is not really interesting; it’s the unusual and sometimes even accidental things that are. ‘ Right to the end of his carrier he went on taking chances.

Reacting against the flat, shadowless photography preferred by his directors. Howe set about exploring the creation of mood through the camera. To suggest the fantasy world of Peter Pan (1924) he used low-key lighting (a technique which for a while became so characteristic that he gained the nickname ‘ Low-Key Howe’). He seized eagerly on devices to increase camera mobility: Mantrap (1926) was one of the first films to make extensive use of dolly-short. When sound it Hollywood Howe was in China trying to set up a film to direct.

The project fell through, and when he returned to America he found himself tagged ‘silent-era’. Work was scarce until Howard Hawks chose him for The Criminal Code (1930). This earned him a two year contract with Fox where he lent The Power and the Glory (1933), a tycoon’s life-saga, a quasi-newsreel look that may have influenced Welles’s Citizen Kane (1941). There followed a stint at MGM, creating dark, opulent interiors for Manhattan Melodrama (1934) and The Thin Man (1934), but Howe came under constant pressure from Cedric Gibbons, the studio’s design head, to over-light.

Quitting, he visited England, where two costume dramas, Fire over England (1936) and Under the Red Robe (1937). Were flattered by his warm, romantic treatment. Returning to Hollywood, Howe freelanced for a while. The Prisoner of Zenda (1937) and Algiers (1938), moody and atmospheric, mark the culmination of his 1930s black and white work; The Adventures of Tom Sawyer (1938) was his first color feature Rejecting the brash tones beloved of Technicolor, Howe went for subdued, earthy colors befitting the poor rural setting, to the alarm of Technicolor’s house cameraman Wilfred Cline.

Howe simply ignored Cline, and was banned from Technicolor films for the next twelve years. In 1938 Howe signed with Warners. The studio style, grainy and downbeat, should have suited his penchant for realism, but in the event he found Warners as restrictive as MGM. Their cut-price, fast-shooting methods outraged the perfectionist Howe, who liked to prepare meticulously and take time to get things right. (Esther Mikyung Ghymn, 2000)

Even so he achieved some fine work; often in an expressionistic vein all high contrast and oppressive shadows – to match melodramas like Kings Row (1942) or Passage to Marseille (1944), besides the near-documentary look of Air Force (1943) and Objective Burma! (1945). Released from Warners, the ex-boxer captured some sweatily vivid fight scenes for Body and Soul (1947) by having himself pushed round the ring on roller-skates. For the rest of his career Howe freelanced.

Most of his colour films date from this period, from the picture-book fantasy of Bell, Book and Candle (1958) to the muted subterranean shades of The Molly Maguires (1969). There was never a uniform Howe look; the style, he insisted, ‘whould conform to the story’, but he preferred black and white, and his late masterpieces are all in monochrome: Hud ( 1962), with its flat white Texan skies; the tormented distortions of Seconds ( 1966); and the slick, glitzy night world of Sweet Smell of Success ( 1957). Howe was never easy to work with.

Tireless and dedicated, he demanded equal dedication from his crews and, perhaps in reaction to the racial slurs he suffered all his life, adopted an autocratic approach that risked alienating colleagues. Given an inexperienced director Howe would virtually take over, sometimes to the point of directing the actors, and even strong directors knew better than to cross him. But few doubted that whatever he did was for the sake of the story – nor that he was, as Alexander Mackendrick put it, ‘quite simply, the best’.

As stated earlier, Chinese Americans’ physical appearance alone has rendered them “unassimilable” throughout American history. Compounding this first barrier are the culture-specific traits of language, food, custom, and value. Popular presses continue to stigmatize Asian Americans as “model minorities,” which means that despite prejudice, this group has “made it” so others should follow suit and not complain. The reality is that visible Asians experience “glass ceilings” in the workplace and “tuning out” by whites in interpersonal communications. ” (David A. Cook, 1996)

“Success,” for Asian Americans at least, does not readily dictate the ethnic person’s cultural identity. This was what Frank Chin realized when he interviewed an award-winning Chinese American cinematographer and director: “From greeting us in the oldest homeliest Sze Yup Cantonese I’d heard since Chinatown old James Wong Howe was a Chinaman. He took us out for Chinese food and ordered for everyone like a Chinaman. He got along with whites, was the genius of the most American art Hollywood movies and had two Oscars without losing any of his Chinese language, culture, or taste. ” (Vincent LoBrutto, 1999) 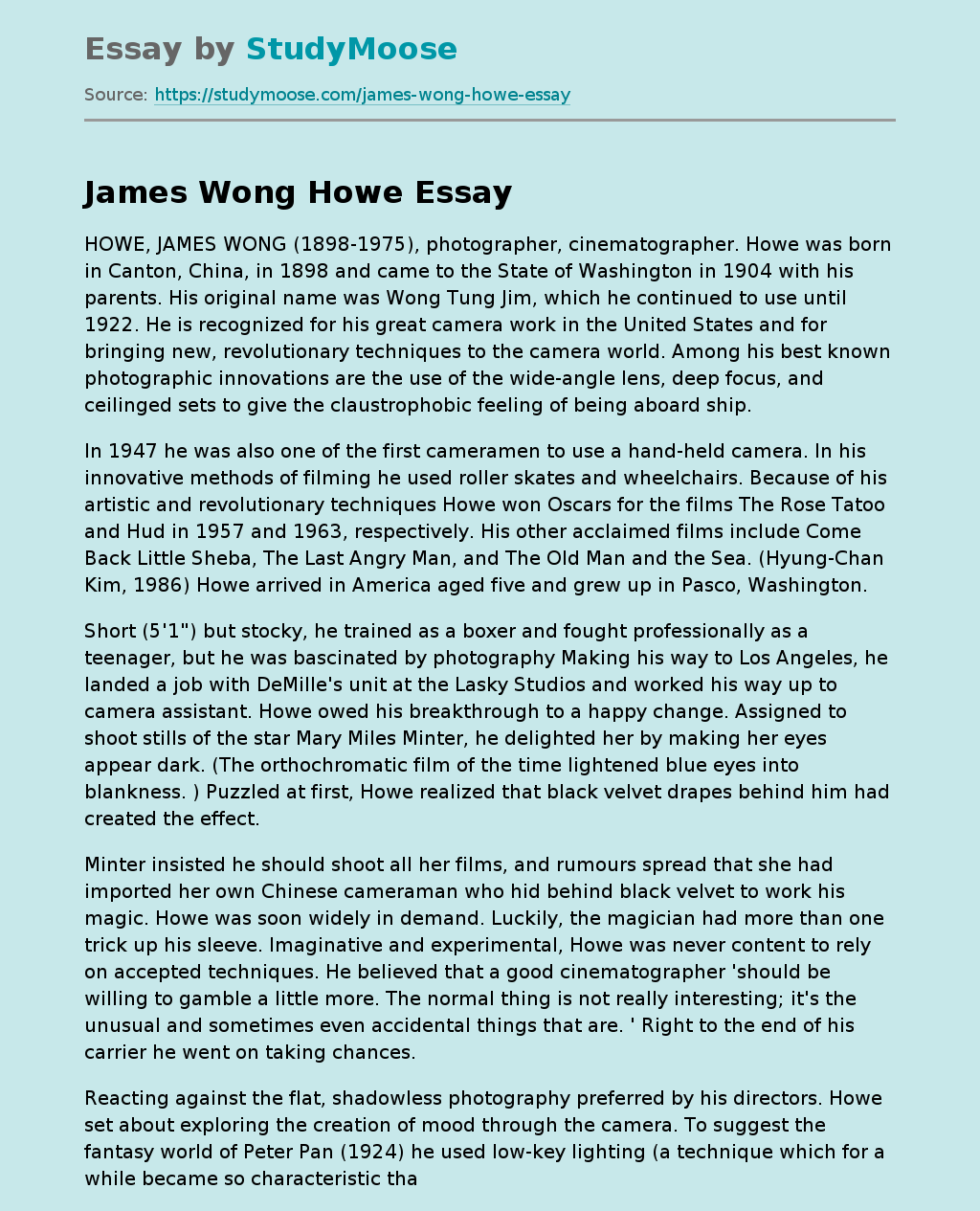