Elias Howe and the Sewing Machine

Elias Howe was born on July 9th, 1819. In his early years, he lived in Massachusetts and helped out on his father’s farm .He was a skilled machinist; beginning in 1838, he was apprenticed in the shop of Ari Davis, a master mechanic in Cambridge who specialized in the manufacture and repair of chronometers and instruments of precision.While there, he learned the trade. Soon after, he was a master mechanic. Being a skilled machinist and mechanic contributed to what he did next.

Don't use plagiarized sources. Get your custom essay on
“ Elias Howe and the Sewing Machine ”
Get custom paper
NEW! smart matching with writer

Around spring 1845, Elias Howe had invented the sewing machine. On September 10th, 1846 a patent for a sewing machine was granted to him. His machine was five times faster than other sewing machines and was the most significant project in his life time. The Lockstitch Sewing Machine

Patent # 4,750: Elias Howe’s sewing machine. It featured a lockstitch design which included three significant parts. The first was needle with an eye point. Second, there was a shuttle operating beneath the cloth to form the lockstitch and last was an automatic feed.

A lockstitch sewing machine binds cloth together with two spools of thread and a needle with the eye at its base .The lockstitch uses an upper and lower thread that intertwines together in the hole of the fabric which they pass through. The first spool sits on top of the machine. Its thread runs through a tension arm to feed it smoothly. Then it threads into a needle’s eye, located at its base. The needle attaches to a foot that can press the fabric against a feed.

The second thread, on another bobbin, is hidden in a compartment beneath the foot. This thread gets pulled on a shuttle to loop around the thread from above. The needle stitches up and down either by a manual foot treadle or a motor controlled by pedal. The Impact of the Lockstitch Sewing Machine

Elias had trouble buying materials for and assembling his invention at first. In the end every part had been improved, and many new ones were been added, but every one of the millions of sewing machines made since, owes at least one essential part to this machine, built in 1845. The way it sews is simple enough: The curved needle, with an eye at the point, carries the thread through the cloth, and the loop of the needle thread is locked by a thread passed through this loop by the shuttle. The materials are hung on the pins of the baster plate, which carries the goods along in front of the needle. The baster plate was the weakest part of the machine. The seam that could be made without stopping was short, and only straight seams could be sewed.

Elias Howe and the Sewing Machine. (2016, Apr 07). Retrieved from https://studymoose.com/elias-howe-and-the-sewing-machine-essay 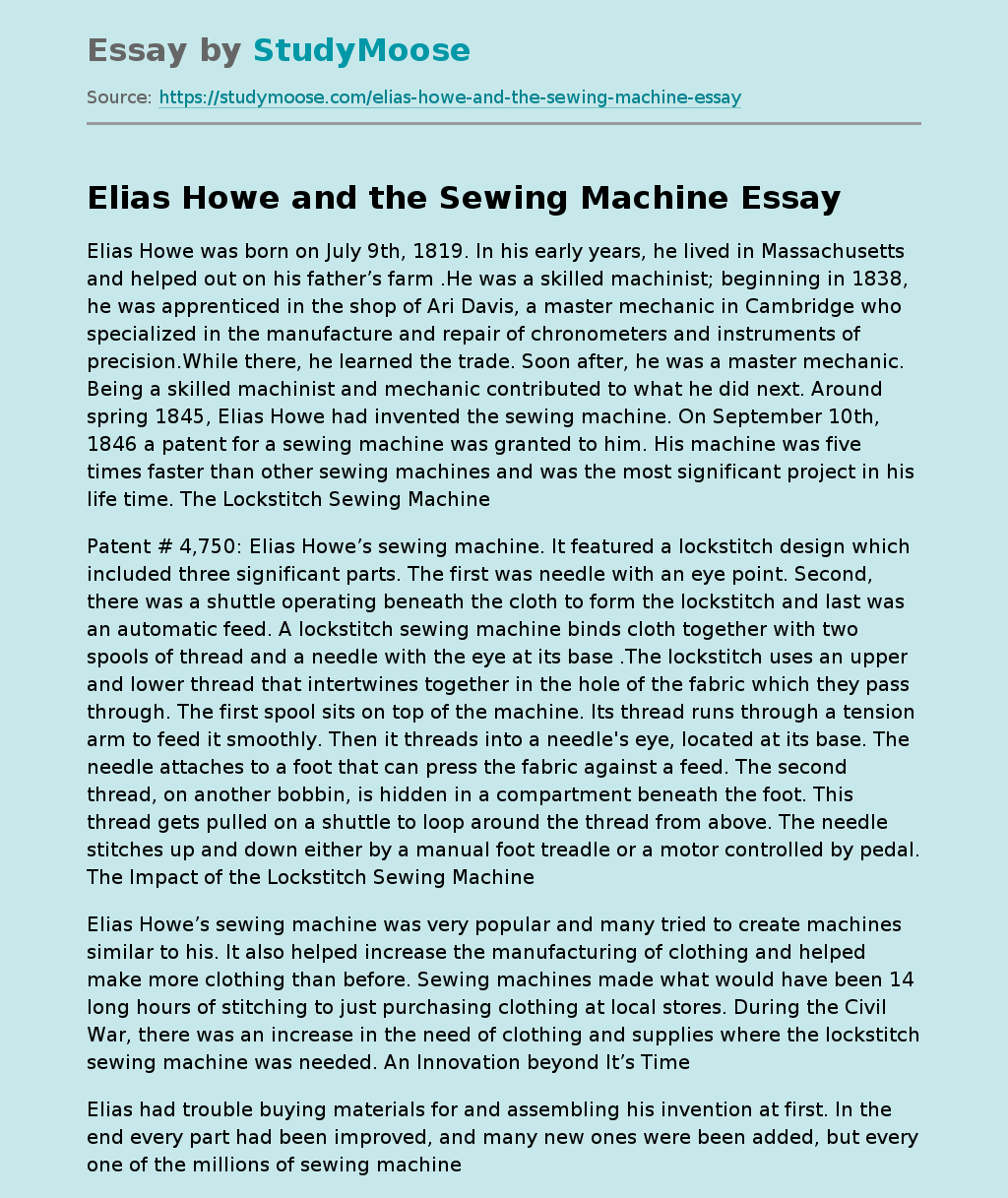