"When i was growing up" by Nellie Wong

1. title- When I was growing up (poem)2. Composer- Nellie Wong3. Year- 19974. What does this text highlight about the concept of identity?This poem is about the narrator’s own assimilation into the dominant white culture, and a need to become something she in fact isn’t. It shows how society can influence your identity, because the narrator wishes to be white as it is the dominant culture and has ‘privileges’ with it. It shows how experiences and interactions with others and society can influence your identity.

Don't use plagiarized sources. Get your custom essay on
“ “When i was growing up” by Nellie Wong ”
Get custom paper
NEW! smart matching with writer

In this poem, the narrator lives in a society where she struggles to find her own voice and fit in a cultural majority. The persona in this poem could have represented society at the time, a shallow society persistent on looks, skin colour and beauty and not focused on the inner beauty of women.

5. What is the connection that you can make with this text and your prescribed text?’When I was growing up’ and ‘Preludes’ by T.

S Eliot share a similar connection in terms of identity. The impact of society on the individual in ‘When I Was Growing up’ is similar to how society caused the people in Preludes to lose their identity. In ‘Preludes’, patterns of imagery appear throughout, especially in the first part, where people’s lives are controlled by what goes on in the world around them. The images of decay and disintegration ‘burnt out ends’, ‘grimy scraps’, ‘withered leaves’ , ‘broken blinds’ expose a world that is falling apart. Due to the monotony and emptiness of their lives in a decaying world, there is no identity; there is no life in the poem.

In this world there is a loss of personal identity and pressure for everyone to be the same and leading the same dull life.

Similarly, in ‘when I was growing up’ the narrator’s life is controlled by what is happening around her. In the poem, when Nellie was growing up, she was surrounded by ideas forced upon her by society that it was better to be fair, better to be white and not yellow ‘I began to wear imaginary pale skin’. These ideas transformed her into possessing a view of her that denied her the ability to appreciate her own identity as an Asian person with yellow skin ‘I felt ashamed of some yellow men’. Due to her surroundings, it forces her to assume another identity that is not her own in order to belong in a ‘model’ culture. Society pressures her to become white, something that she isn’t, ‘when I read magazines, I saw movies, blonde movie stars, white…desirable woman’.

6. What techniques does the composer use to convey his/her ideas about identity?The techniques used in this poem include rhetorical questions, imagery, and repetition. The metaphor in the image ‘ Chinatown as a ghetto for yellow people’ was used to show how their was a lack of freedom for the Asian immigrants, they struggled to fit into the cultural majority. The repetition of the lines ‘when I was growing up’ at the start of each stanza, displays a sign of maturity by mentioning the past with the use of the word ‘when’. This recollection of the past revealed how the speaker had progressed or developed.

In this poem, identity of the dominant culture is also seemed to be linked with cleanliness ‘no matter hw much I bathed, I could not change my skin’. It shows how the poet wishes to change who she is, due to the pressure of wanting to become white, but no matter how hard she tried she couldn’t.

The poem had a negative tone throughout; there was never a positive image. For example ‘”When I was growing up, I read magazines and saw movies, blonde movie stars, white skin, sensuous lips, a desirable women, I began to wear imaginary pale skin.” And ‘I felt ashamed of yellow men, their small bones, their frail bodies….’ These images show how that she was ashamed of herself and had no confidence because she was dark. Due to the influence of the dominant culture and their sterotyping, she felt like she needed to change her identity in order to belong. By overcoming these racial stereotypes, she is able to forge an identity of her own while living in a world where her culture is looked down on.

But in the end of the poem, there is a rhetorical question ‘I know now that once I longed to be white. How many more ways? you ask. Haven’t I told you enough? It is through this that she finally accepts her own identity as a Chinese American and finds her own place in the world.

"When i was growing up" by Nellie Wong. (2016, Jul 28). Retrieved from https://studymoose.com/when-i-was-growing-up-by-nellie-wong-essay 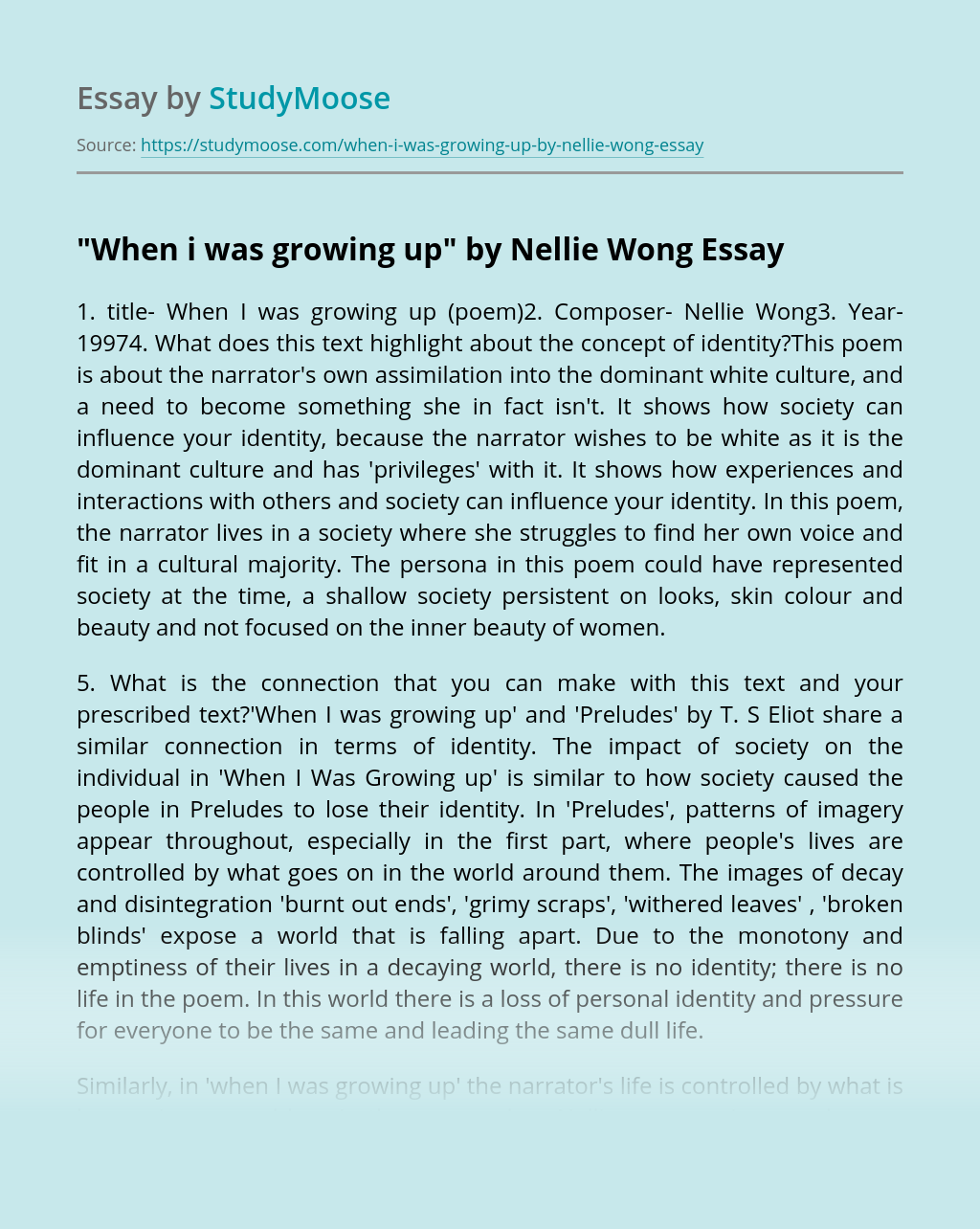